the world is my oyster

I'm not really sure what that means: the world is my oyster. I mean, oysters are kind of ugly and slimy. They are pretty stuck where they are, not big world travelers. But they do take an annoyance, e.g., sand, and turn in into a beautiful pearl. I can crack open the oyster and who knows what I may find. But I feel like the saying is more akin to being on top of the world, and I haven't noodled out the analogy yet. I guess I could just check wikipedia. Or not. But I think, perhaps, the world is my oyster. I'm still broke. No car. No "real" or "steady" job. No fancy digs. No savings or back-up plan. But the world has thrown all kinds of shit at me and still hasn't taken me down. I'm gonna carpe the hell out of the diem and enjoy all the adventures that lie ahead.

My friend dropped back by Saturday morning and we managed to get the steering and engine controls reassembled. I think the tachometer is on the fritz. It was stuck on 700 rpm and now on 1600. But we got her started up and let her idle in the slip a bit. Unfortunately, there is some piece attached to the engine that is badly corroded and should be replaced before I take her out. C'est la vie; that's boat life. Always another project or repair around the bend. We had initially set the housing with the controls on the binnacle upside down and I kept sort of looking at it askance. I knew the shifter was on the left and the throttle on the right, but the range of motion and where the levers were placed seemed off. My friend didn't believe me at first but I convinced him to give it a try and indeed we had them upside down! Everything about reassembling parts at the binnacle was a puzzle, which can be both fun and frustrating, like any game I guess. 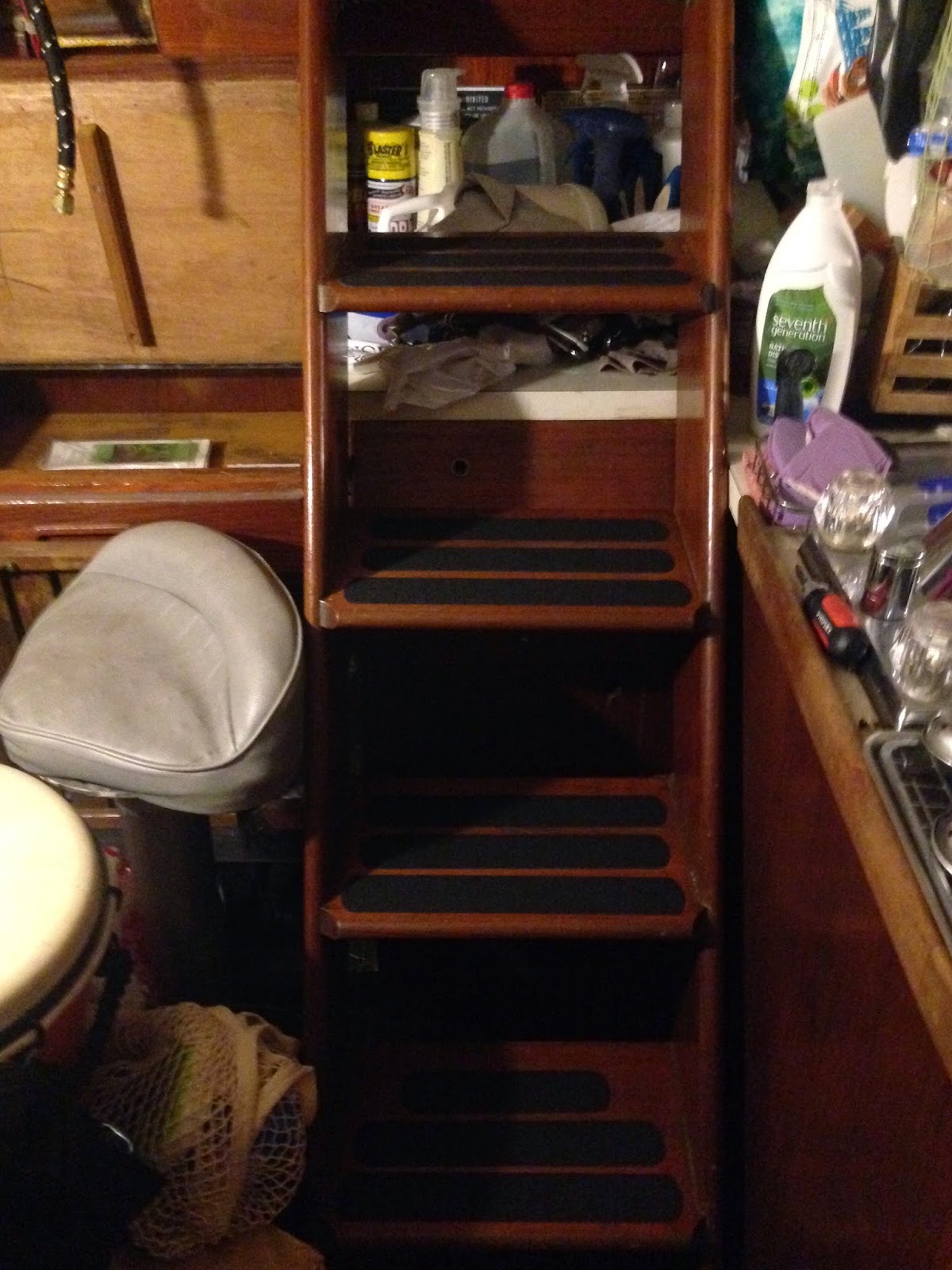 A few weeks ago I finally admitted that after almost two years I was in fact never going to make little marlinspike-sailor-y mats for the steps. I looked at getting the Treadmaster nonskid pieces for steps but ended up with a much more economical (about $1.00 per foot) nonskid adhesive tape from 3M. I cleaned off the steps, then wiped them down with alcohol. I cut the tape into three pieces per step and then took something round and drew rounded corners. I honestly don't remember if it was a cup or what now. I trimmed the corners and then carefully tried to get all the pieces lined up nicely. I actually think it came out well. It feels secure but not abrasive on my bare feet and the pup dog seems to like it. She can definitely go up the stairs by herself but doesn't yet realize it. She still makes me boost her up the first step but I am letting go of her earlier and earlier to try to convince her she can do it on her own. She is still jumping down from the top step which I think is really bad for her shoulders. I need to get someone really good with dogs to help me teach her how to walk down the stairs. I've seen other dogs go up and down them with no problem, so it is all in her head. But that doesn't make it any easier.

I am in the weeds on getting ready to leave. The boat is still a disaster zone but has to be spic and span before my friend staying aboard arrives. I still have gear I need but am nervous about buying anything and being short on funds. I'm hoping I'll have three solid days of work in DC this week, but it does seem like the end is near on the project. I need to upload documents to the cloud, print tickets, just get all the loose ends wrapped up. Still need to nail down my pet back-up people and write a good tome on the care and feeding of my beloved furry crew. But everything is coming together. There is still some work to be completed on my friend's boat when I arrive, but I don't mind the hard work and enjoy the hands-on chance to learn whatever I can on repairs and installations.

My hair has gotten insanely long and the ends are rather dry and frazzled, so with making a little money and working in DC I've been really excited to go get a cut from my fav guy in Georgetown. I haven't had my hair cut since last November in Miami and before that it had been a little over a year. That was the last time I went to my usual guy, Thomas, in DC. I first went to Thomas six or more years ago when I still lived in Miami and came up for a job interview. I wanted a good blow-out and landed in his chair. He's the only hair stylist I've had whom I trusted completely. He knew that I came less and less frequently because I simply didn't have the money to keep my hair up anymore. The last time I saw him he asked if I needed some help with the cut or color but I insisted he needs to make his money, too. But when I got to the counter he'd already comped my whole session (north of $150). I'd bring him butterscotch brownies since he couldn't have anything with nuts or chocolate. He was there with me through a divorce, several silly boys, and a few heartbreaks, including the death of my father. I remember sitting in that chair and joking that the one good thing about being so depressed over losing my father was that I'd lost a ton of weight! Even though I hadn't made it out for a cut, we had messaged on Facebook now and then. I thought about briefly popping back on Facebook to shoot him a note but just went ahead and called the salon to book an appointment for next week so my hair would be refreshed before my big trip. The usual guy at the reception desk answered and I told him I'd like to make an appointment for a cut with Thomas. He paused a second and then "I'm sorry, but..." Oh, great, he moved to some other salon, I thought. Or back to St. Louis. "I'm sorry, but Thomas passed away three months ago. He had advanced pancreatic and liver cancer. He only had a month." Why do the poisonous people have to live so long and the really wonderful people go too soon? The world shined a little brighter because Thomas was in it, and I just hope he knows he's truly missed.

So, I'm still here, they haven't gotten me down yet, and one of these days I'm going to figure out what it means, but the world is my oyster.
Posted by Suzy at 9:28 PM