Over three years since I posted here, so many changes, so many adventures. And on the move.

Very long story short, the surfer was never the man I hoped he could be and I was in love with a man who never existed. It was all Devotion to a Dream. My heart broke so many times but it wasn't fair to either of us.

Ambrosia sold in November 2017 to another Annapolis liveaboard, and she is currently on the hard right where I put her, being fixed up for cruising. I moved out of the House of Neverending Sorrows and left Annapolis in December 2017 to move to a renovated barn in Western Maryland. It quickly turned out to be a disaster with leaking propane, faulty wiring, and a misogynist, micromanaging, man-splaining landlord. I quickly moved to an apartment, but not knowing the area, had landed in the worst neighborhood in Hagerstown, referred to as "Little Baltimore" for good reason. My duplex neighbor was running a trap house with heroin and prostitutes and my 4+ months there felt like living on the set of The Wire. When the other apartment became vacant local corner boys began using it as a stash house. I'm pretty tough but living alone in that environment was more than I could take.

I put all my stuff in a 5' x 10' storage unit, packed the dog and cats into a Subaru Forester known as "White Rabbit," and began this crazy tumbleweed gypsy nomad adventure. I tent camped with cats. That takes a special kind of crazy.

I logged much of my journey from June 2018 through October 2019 in a Facebook album, but that platform has obvious limitations. I had hoped to catch this blog up on those travels, but times were hard and I never managed to tell those stories here (yet). 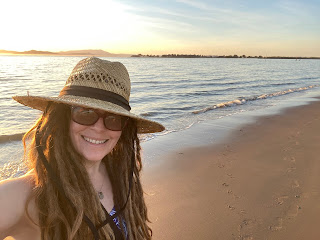 The current leg of my journey begins at an off-grid vineyard in the interior of southern Humboldt County, on California's Lost Coast. I spent four months (2.5 in a yurt) at the vineyard and left on Valentine's Day, heading south for two nights of dancing to Pigeons Playing Ping Pong in San Francisco. I stayed at a motel in Oakland and ubered to the shows. I had planned to then head for Santa Cruz, but a needed paycheck had not arrived and I was pretty much stranded for the past week-and-a-half in Berkeley, CA. (Paycheck finally came, though now without work again, but at least there's breathing room.)

I've been a full-time camper since June 2018 but this is the first time I've done any urban camping and boondocking right in the city at parks and parking meters. The homeless situation here is unspeakably bad, just heartbreaking. That's another story for another place, but one I feel compelled to tell.


Now I'm off to grab a bite at a Pakistani place and be a tourist for the afternoon, maybe stop at the library and charge this laptop and other devices. Hoping to swing by Phil Lesh's Terrapin Crossroads in San Rafael and see Sausalito (I ran a 50K trail race on nearby Mt. Tamalpais back in 2011) in the next couple days before leaving the Bay Area. Then I'll head down the Pacific Coast Highway to Santa Cruz and points south before hanging a left and eastward ho.

[Sitting here now in July 2022 with so many adventures to recount and a major new expedition on the horizon; the world is my oyster1]

Labels: travel, vanlife
Location: Berkeley, CA, USA
Newer Posts Older Posts Home
Subscribe to: Posts (Atom)
a heartfelt thank you to my readers and friends i haven't met yet. i hope you enjoy the saga of our adventures and foibles. projects and plans do not always go smoothly. i am a smart, resourceful girl. i do things my way, on my schedule, in my budget. this is an unvarnished look at the life of a girl trying to get by.