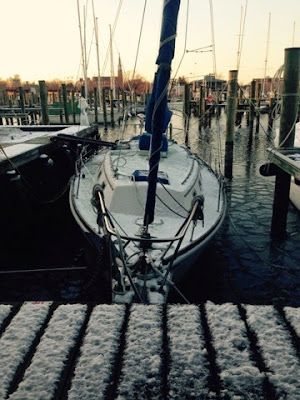 If you need any motivation to sail south, here it is. Even with one of my two little space heaters aimed into the engine room, this latest arctic blast has the water pump frozen yet again. It's been over 24 hours without running water and no end in sight with another storm coming tonight (allegedly 5-10 inches of snow coming overnight) followed by several more frigid days. (Anyone in Annapolis want to loan me a spare oil-filled space heater?)

The storm on Saturday night was awful, and stressed me and the pets much more than Sandy, which we mostly slept through. I took an extra pill to try to help me sleep but we were sailing in our slip and the noise of the wind whipping everything outside kept me up most of the night. The worst feeling is when a gust hits and my stomach is in my throat fearing a crash into the dock. We had sustained winds around 40 knots and gusts of at least 47 knots, likely more. I heard some terrible flapping above the v-berth as I tried to sleep and had images of my headsail completely unfurled, flogging wildly, being ripped to shreds by the winds. A few inches of snow had fallen and everything outside was iced and slippery, so with the ferocious winds and a decent chop in the marina's icy waters, I did not want to risk going topsides in the middle of the night. I popped my head out the companionway about 1:30AM. Miraculously the sail was fine. I was likely hearing three flags ashore that are basically just above my bow. The bimini cover I had slung over the boom and secured with bungees was a noise culprit, however. One bungee had worked its way free and the fabric was thrashing about. From the companionway steps I managed to reach the other bungees, unhook the fabric, and pull it inside.

One of the main challenges with these rough north winds is managing my lines. The north winds blow all the water down the Bay, dropping the water level easily 3 feet instead of our normal 1 foot lunar tides. When the water is low I'm aground and can't move the boat closer to the dock. So I want the boat as close to the pilings as possible so I can climb off the boat, but I also don't want to be banging into the dock in the high winds. So, it's a delicate balance and a gamble every time. This time I lost the gamble. When day broke the boat was actually not badly positioned by the dock. But my lines were completely tight, which overly stresses deck hardware. So I loosened one of the stern lines. In my defense, I hadn't had my morning coffee yet. But I gave slack to the absolute wrong line. I must have been thinking I didn't want to loosen the one keeping me from hitting the dock, but by releasing the other line, which kept me close to the dock, it allowed the boat to move. Except that we were already sunk into the mud, which is why I probably thought it wouldn't matter.

And nothing happened right then. But by the time I had made my coffee and I was all bundled up to walk the dog, the boat had leaned over to port enough that at the boarding gate I was now a couple feet away, (and a few feet below), the dock. No way I could climb over to the dock. I put the dog ramp from the cabin top to the dock and sent the dog ashore to piddle on the snow. The dockmaster put her back on the ramp to come back aboard. But I was stranded. Inside, things on the starboard side of the boat were sliding to port and I struggled not to roll off the settee. Thank Poseidon for my gimbaled stove.

In the afternoon I knew the dog really needed another break and I was almost out of water for tea, cooking, flushing, et cetera. I needed to get ashore. I tried using a winch on a line to pull the boat upright, as if I was going to be able to grind a 20,000 pound boat upright. Not likely. I saw someone ashore and asked if they'd hold the dog ramp steady for the dog to get off since it was stretched as far as possible but just barely reaching across. Pup made it, but what about me? The dog ramp is not intended for people use. Even though it supposedly can handle a 200 pound dog, dogs are on four legs and lower to the ground. I didn't see any other way to make it happen so I crawled on my hands and knees on the ramp. It was pretty terrifying, but going back was worse. Only one corner was really resting on the cabin top. I convinced someone to hold onto the dock end, (one corner was tied to a cleat, but it could still fall away from the dock), but I was risking my weight causing the ramp to retract. The icy mud below with no ladder nearby is a very frightening prospect. It's not that I'm afraid of heights... but I am absolutely terrified of falling. 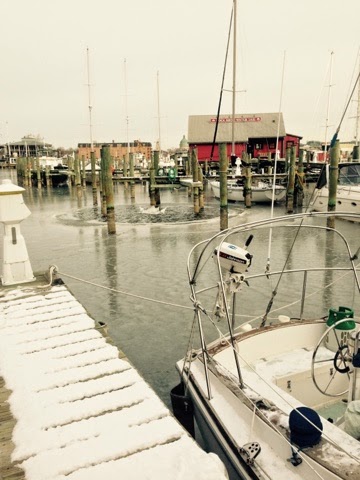 I went to bed early but luckily awoke a little after midnight and popped my head out the companionway to see if there was any slack in the lines. The water had risen enough to slack the line and bring the boat mostly back level. I hurried out and took in the slack in the line while I had the chance. This morning it was still just too far to try to get across and up to the dock. The only way I might be able to reach is to stand on the toe rail but at that spot it has a stainless steel track that is very, very slippery. I sent the dog over her ramp, took a deep breath, and slowly crawled over on the ramp. I thought I'd be able to sit on the dock, stretch a leg down to the deck, and launch myself down to the boat. But it was just too far for me. Maybe I'm a total scaredy-cat, but I don't just jump a couple feet down onto my boat, especially not when the deck is covered in ice and one misstep means falling between the boat and dock into the ice-covered water. So I risked the dog ramp again, which was especially scary with no one to hold onto the ramp to keep it from sliding off the dock. But I made it; whew.  As you can see from the photo above, the water is now covered in a sheet of ice except across the fairway where the ice-eater can only keep one slip clear.

Now I'm hoping the tide comes up a bit and makes it easier for me to get ashore. One of the cats peed on the bed at some point last night so I have to wash all the bedding. In case I haven't mentioned it before, making the bed in the v-berth is my absolute least-favorite boat chore. It is an unmitigated pain in the ass and is certain to end in tears if I don't have a couple adult beverages before trying to make the bed. If I ever have any money I must get fitted or drawstring sheets for the sake of my mental health. Since we are in for our biggest snow storm so far this season beginning late this afternoon, I'd also like to get in a run if possible. I ran 30 miles last week and the plan is to maintain that going forward. I'm down a couple pounds and half and inch so I don't want to lose momentum, especially since I've had to eat carb-heavy stuff like pancakes, rolls, biscuits, and dumplings since the pantry is close to bare (other than flour) and I'm still weeks away from making any money. But I just don't know if I can face running in sub-20-degree weather and snow this week. I can't afford to join a gym to run inside and I did one run last week on the "dreadmill" at a friend's gym and it was awful. I'd rather run 10 miles outside than 5 on a treadmill. I need to be doing yoga anyway, but an hour of yoga will only burn 150-200 calories, versus a good 700 calories if I run 6 miles. We'll see. My feet are still cold from walking the dog 3 hours ago, so I have a feeling when I finish writing this I'll climb ashore for a hot shower and admit the run isn't going to happen today.

Dear weather gods... please let it be spring. Not summer, because I don't have any air conditioning. Just spring. Just 70 degrees and no humidity and sunny every day.

Labels: boat bedding, liveaboard, pets aboard, running, winter aboard
Newer Posts Older Posts Home
Subscribe to: Posts (Atom)
a heartfelt thank you to my readers and friends i haven't met yet. i hope you enjoy the saga of our adventures and foibles. projects and plans do not always go smoothly. i am a smart, resourceful girl. i do things my way, on my schedule, in my budget. this is an unvarnished look at the life of a girl trying to get by.