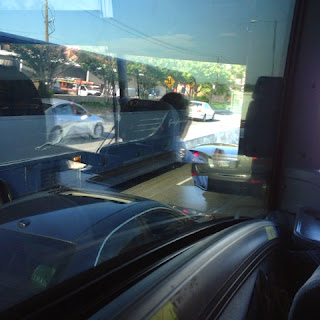 The daily grind, on the commuter bus stuck in DC traffic. The days are long with a four-hour round-trip commute. The work is mind-numbingly dull and soul-sapping. I try to just keep my eye on the prize: fixing up the boat, sailing away somewhere, escape, freedom.

Once upon a time I had a job. On my second day my boss said my tank top was making it hard for him to keep his hands to himself. I was shocked and creeped out at the comment, both because it was so patently inappropriate and because he was easily old enough to be my grandfather. Being caught off-guard by the comment and in dire need of the work, I basically ignored the comment and never wore that top to work again. But looking good is a major factor in good tips--if anyone thinks good service alone cuts it they are kidding themselves. Beauty is rewarded in our society and I have to use my assets as best I can. But that means look, don't touch, and if you have to be told that then you need to be smacked upside the head, or worse.

There are respectful ways to appreciate beauty and there are creepy, inappropriate, and illegal ways. There is a great New Man Podcast episode on how to appreciate women without being a creeper. Really, a must-listen for men and women. Looking someone over approvingly with a smile is very different than leering or catcalls. So, yes, I do think it is OK to look, to compliment respectfully, but not to leer and definitely not to touch. Us girls check guys out all the time (uh, you think girls watch football for the game...sorry to disappoint you, but the tight uniforms don't hurt...) but we sure don't smack waiters' asses or catcall guys walking down the street. I confess I expressed my disappointment to a scuba diver who was out of his wetsuit but putting on his t-shirt too quickly... it was a nice show; and I confess I'll probably hire him to clean the boat bottom because he was a hottie. But I didn't get "handsy" with him. It wouldn't even occur to me to invade someone's personal space that way.

Despite banning that tank top from my work wardrobe, things just got creepier. He gave me this pathetic nonsense about his girlfriend having died and being alone and really needing a hug. So I was cajoled into hugging him every day at work. I try to give people the benefit of the doubt. Figured he's just a grandfatherly old man. But it was very creepy. And when you really need the job, you can't say "No, I think I'll pass on the hugging nonsense." (And, gee, that's why there are lots of seminars and lawsuits and such related to this topic.) Then I got guilt-tripped into having dinner at his house on the (likely bullshit) pretense of teaching me how to make the fishing lures. When I was sitting in a chair and couldn't get away he leaned over and tried to kiss me. Thankfully, I'm pretty skilled at turning quickly enough to make sure it just hits my cheek. But seriously?! What insanity has to be going through a guy's head to do that to a woman half his age who works for him. I mean, it's not like I'm flirting him up or something. Jesus. I feel like it's rude to just tell every guy I meet "Dude, you know you're in the Friend Zone, right? You know I will never, ever sleep with you, right? Because if you didn't know that, you know it now." That just seems rude to me. Guys should just assume that is the case unless I explicitly tell them, "Hey, wanna fuck?" Ugh. But being ever-too-forgiving I tried to just brush it all off and keep at the work of fishing. Then one day when I was forced into another hug his hand was firmly planted on my ass. I was, truly, just stunned that someone would do that. It's so beyond the limits of what is acceptable in our society that I honestly didn't know how to react. It's like I was outside my body looking down, saying, wow, is his hand actually on my ass? No. Fucking. Way. My skin crawls just thinking about it. I think I worked three more times. I would show up as late as I possibly could to avoid spending any time around him alone and similarly race off as soon as I could. Just so incredibly creepy, disgusting, disappointing. As if I needed my lack of faith in humanity renewed.


I happened to mention the "handsiness" to my mother. Well, apparently I'm really out of touch with reality because I "learned" that she had weeks ago seen this coming because...and I quote...I send out all kinds of sex pheromones so of course this would happen. And I shouldn't be burning any bridges. I should just politely say "I'm sorry, but this can't happen" and not hurt his feelings. As if it was some forbidden mutual attraction. Wow. Yes, I'm actually choking back vomit. Pray you never get her on your jury if you're a rape or sexual harassment victim because, ladies, it's your fault. And this from a woman who wants to dump all her unwelcome emotional baggage on me instead of her children she is actually close with or, more appropriately, a professional therapist. The scariest thing: that is not the most horrible thing she's said to me. Just, wow.


Here's a mother who will protect her babies. Does it get any cuter than ducklings? Make way! (Unfortunately, just about every day there is one fewer duckling in the parade... it's a dangerous life for those little ones.)

I'm trying to be a better mom to pup dog. I just finished reading Inside of a Dog and really appreciated her insights from both a scientific and dog-owner perspective. I need to focus less on "training" and "obedience" and more on the richness of our relationship, how I can afford her more opportunities to smell the world around her, bond with me, play, and enjoy the all-too-brief time we have together. I tell her I'm going to work harder to be a good mom and to understand her perspective on the world, to try to understand her umwelt. All these years we've been out walking with her dilly-dallying behind sniffing things and eating goddamn berries, and I've been yelling at her and tugging the leash: "We're on a WALK, dammit! We're not on a SNIFF!"

Well, it turns out that all this time we were on a sniff.

She was too kind to tell me how silly all this rushing around walking is when all we have to do is shove our noses in the grass and smell the world around us. Well, and swim; that dog just isn't any happier than when she's swimming back to shore with a nice, big stick. Because I've been getting up at 4:30am or earlier, last week we snuck in a couple of walks off leash, since few others are out walking at 5:00am.

I'm really itching to go have some adventures. I want my freedom so very badly. That's the only reason to have money, the freedom it buys. You just have to make sure you don't need the money; otherwise you're just a slave to the stuff it buys and the constant bills. I only wish I didn't have so much hanging over my head. And, of course, the biggest snag to my adventuring is the pets. I could easily circumnavigate as crew on others' boats, just hop-scotching my way around the globe, if I didn't have the pets. But I made a commitment to them for their lifetimes and I can't reneg on that. They have stuck with me through all kinds of craziness, moving all over Miami, moving all over the country, moving aboard. They kept me going when my father died and I just lost it completely. In so many ways I owe my life to them, so although it holds me back, I have to keep my commitment to them. And I don't resent them, they're my pack--that's for whom you make sacrifices.

But right now I'm so grateful it's just me and the beasts. We are our pack, all for one and one for all. Conversations with others can be such a drain, a drag. Everyone has some judgment to pass on my life or unwelcome suggestions to "fix" it, usually involving getting a cushy government lawyer job--the odds of which are longer than winning the lottery. It just gets so tiring, having people try their damnest to make me fit into their ticky-tacky-house world. But I can't do it. Won't do it. I refuse to live some sheltered, prepackaged life, all safe and risk-averse. Instead, I go to crappy neighborhoods (I recall some friends thinking I was seriously nuts looking at an apartment in Dru Hill in Baltimore--and they were right on that one!). I go to travel-warning countries. I ride the local bus. I eat street food. And, yes, I got dengue fever. But I'll take that any day over a white picket fence in suburbia or a [insert whatever brand] cruise ship vacation. So I'm going to keep tempting fate and taking risks. Sailing barefoot. Eating street food. Living.

I don't have all my ducks in a row yet. I still have to make various arrangements for the pets. Still need to work my ass off and make some moolah. But last night I bought a plane ticket to the edge of the world and a month from now I'm going sailing well beyond the Bay.
Posted by Suzy at 10:18 PM 4 comments:

Labels: freedom, liveaboard, pets aboard, work
Newer Posts Older Posts Home
Subscribe to: Posts (Atom)
a heartfelt thank you to my readers and friends i haven't met yet. i hope you enjoy the saga of our adventures and foibles. projects and plans do not always go smoothly. i am a smart, resourceful girl. i do things my way, on my schedule, in my budget. this is an unvarnished look at the life of a girl trying to get by.