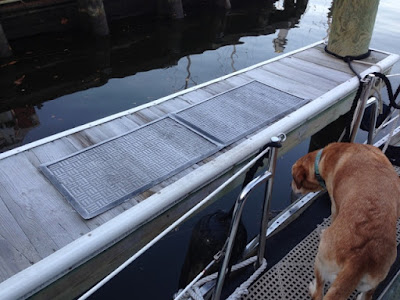 The first frost arrived and pup dog was wary of hopping off the boat. I still have to see whether the stern is close enough to the bulkhead to run her dog ramp so she doesn't have to brave the finger pier when the ice and snow arrive. Luckily, it has been an unseasonably warm December. Unfortunately, I have heard January is supposed to be our usual cold and February is supposed to be much worse than usual, with heavy snowfall. I try to keep telling myself that this is the last winter, at least for a while, and we simply have to hang in there and get through it. 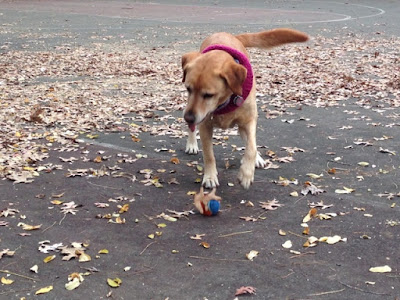 Pup dog has been very spoiled having a guy who will throw the ball far enough and often enough to tire her out. He even bought her a Chuck-It. If only she would retrieve a little better--she has a habit of dropping the ball about 15 feet away. For years I have worked on getting her to bring the ball all the way to me, so she has this funny routine where she keeps nudging it with her nose to roll it toward me as I keep telling her "closer, closer." We took her along last weekend when we played disc golf and only about half way through the 18 holes she was slowing down and eventually "lost" (or more likely hid) the ball so she could rest.

School ended in early December for fall term and I was relieved to have made my "A"s in both Swedish Massage and Anatomy and Physiology. I also managed to avoid being massaged by the total creeper who was in the Swedish Massage class and who was incapable of being professional or appropriate. Many of us in the class were disappointed that the program didn't take any real action to remove him from the labs, instead giving him useless warnings. If by some miracle he passed and ends up in the Deep Tissue class in the spring, I'll refuse to work with him and either leave the program or the school can have a legal battle with me. I came to dread the massage class but feel I'm already committed to finishing since the time and money already invested are completely wasted without a license. So, we'll see what happens.


Not exactly news, but I have too much stuff. I’ve gotten rid of 95% of my worldly belongings, but still have too much. I know I’m only supposed to care about people, not things, but I am such a Cancer--my home is so important to me and some of my “things” are part of what makes it feel like home. Then there is the bigger, deeper issue that I feel I am unlikely to have the financial wherewithal to replace things or acquire new things. I’ve been living with piles of stuff everywhere and although it bothers me it wasn’t mission critical to deal with it since the boat isn’t ready to head anywhere yet. But now I have the surfer living aboard with me and I want him to have space to feel at home. I bought him a hanging shelf and added it to the main hanging locker so he would have a place for clothes and I got rid of the mini fridge to make more space and have a better spot for his guitar. I need to do a lot more organizing, cleaning, and paring down so he doesn’t feel like a houseguest and knows he has his own space. But somehow we are juggling the Rubix cube aboard and fitting two people, two cats, and pup dog on this little boat.


Although I gave up the mini fridge, my marine fridge is still not working. We’re sucking it up right now and using block ice; at least it’s cold out so it doesn’t melt nearly as fast as it did in the summer. But once I get the car paid off and tuition covered, repairing--or more likely replacing--the refrigeration system will be a priority. Although a new compressor will be pricey, I have a feeling it will be more cost effective than paying for hourly labor to troubleshoot whatever is wrong with a 20-year-old unit. 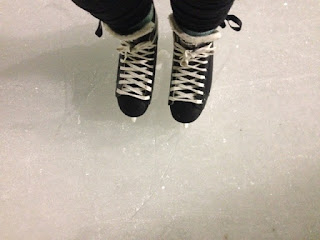 I’ve only been out running twice since I fell back in September and scraped my knee badly, but I have made it out ice skating a few times. A few years ago I was skating 4 or 5 days a week but the past two seasons I only made it out once or twice. This year I spoiled myself with a 30-skate pass, one of my Christmas presents to myself. I do love to skate and I’ll enjoy the pass, but I quickly remembered why I stopped skating at Quiet Waters regularly--rink rats and jerk parents who raise brats. I have to force myself to be on the ice right at 9AM if I want to get any time to skate before the a$$holes and their kids arrive. Sigh. 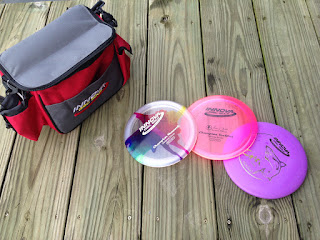 My other Christmas present to myself was three discs for disc golf. I didn’t expect to enjoy playing stoner frisbee and initially just went along because the surfer really likes it and I wanted to spend time with him. But I’m not terrible and the surfer is a great coach, so we try to play as often as our schedules and weather permit. His discs are mostly better for someone bigger, stronger, and more experienced than me, so I picked out three different discs, a distance driver, a fairway driver, and a mid-range, better suited to my level and my backhand throw. One of my Christmas gifts from the surfer was a bag for my discs. 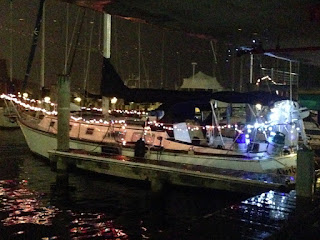 The holidays have been very stressful as usual. I never have much of any money and am always missing my father. This was the first Christmas in four years (since my father died) that I exchanged any gifts and while I enjoyed picking out some surprises for the surfer, the financial and emotional stress of the gift exchange process overwhelms me and fills me with dread. We did finally put some Christmas lights up the day after Christmas. I managed to get through the weekend and now just want to get past New Year's. I'd say "maybe 2016 will hold better things" but usually each year is worse than the last and hoping otherwise is likely to jinx me. But just maybe this coming year will be full of health, wealth, and love.
Posted by Suzy at 5:28 PM No comments:

Labels: grief, liveaboard, love, marine refrigeration, pets aboard, relationships, winter aboard
Newer Posts Older Posts Home
Subscribe to: Posts (Atom)
a heartfelt thank you to my readers and friends i haven't met yet. i hope you enjoy the saga of our adventures and foibles. projects and plans do not always go smoothly. i am a smart, resourceful girl. i do things my way, on my schedule, in my budget. this is an unvarnished look at the life of a girl trying to get by.