Once again, apologies for the delay in posting. Here's what's been going on, mostly in photographs.

My dockmate next door left so I moved into his slip to get a smidge more privacy. The engine still won't start, so I rounded up a slew of sailors more experienced than me and they moved me on the lines. I put the dodger back on, so the cats quickly gave their approval to the new napping spot. 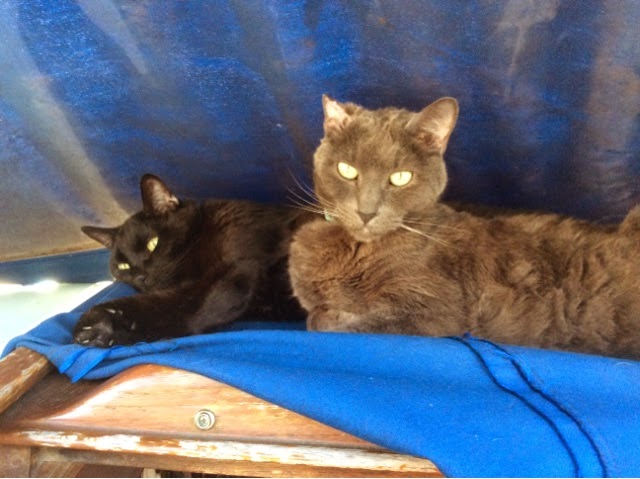 The new view from the bow. 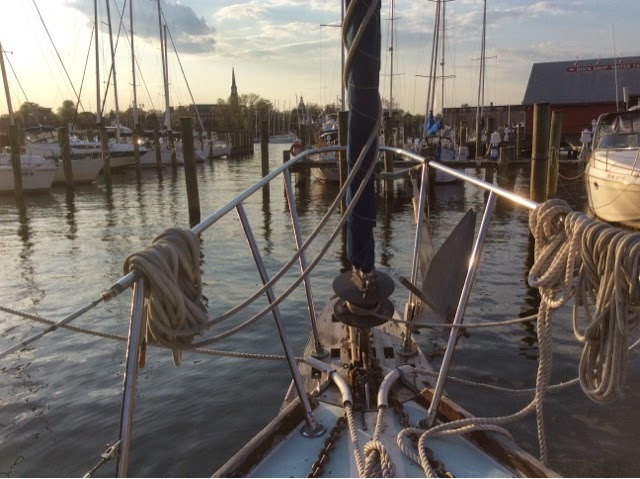 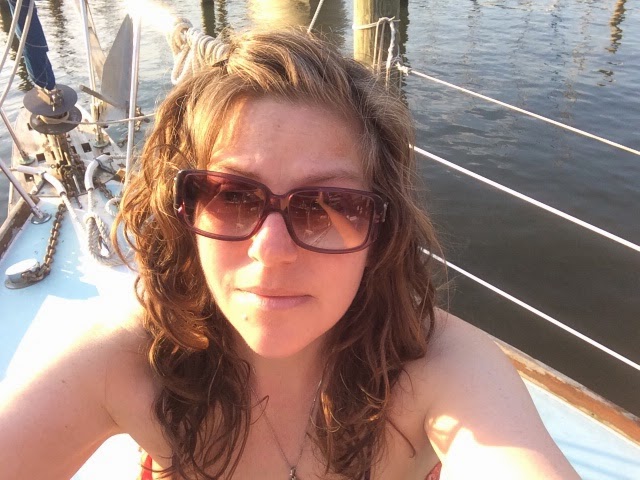 Pup dog was nervous about the finger pier. 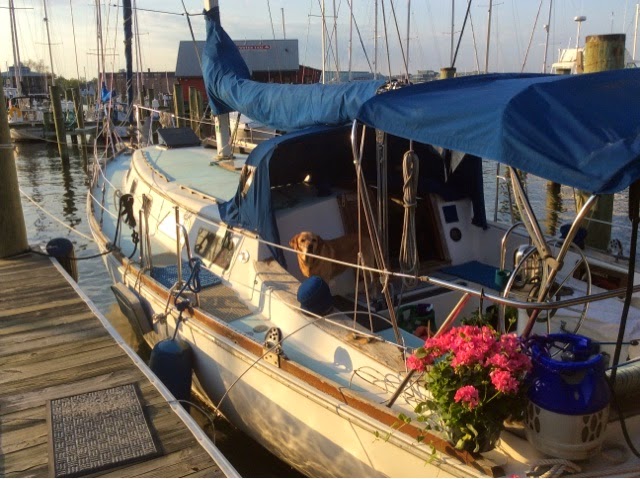 Moving my cable TV and high-speed internet was a nightmare and left me 5 days "unplugged" from the interwebs. But--thanks to the old gods and the new--it was back up and running in time for Game of Thrones. The Comcast tech was a good sport having to get on the very tippy work float to repair the cable at the new slip. 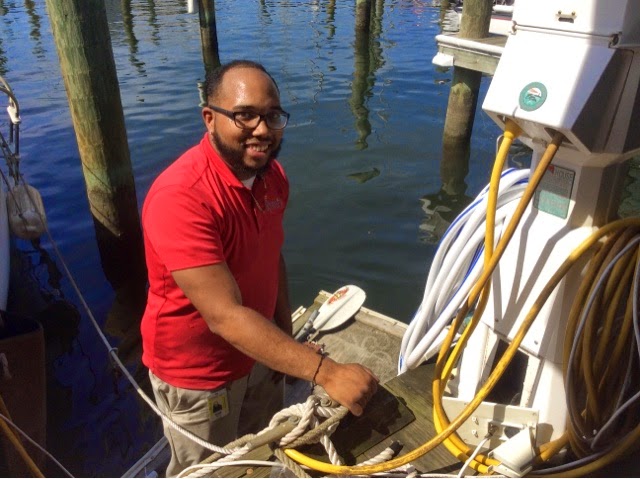 Installing the portable air conditioning was a nightmare and it is no where strong enough to keep us cool. It's still hellish and 80 inside if it warms up outside at all. And naturally rain still gets in the port light despite all my creative efforts to stop it. I will probably have to get a window unit to help the other one (that cost my last $300) and just put it in the companionway. Meh. I can't leave the boat to work in DC and have the pets sweltering. 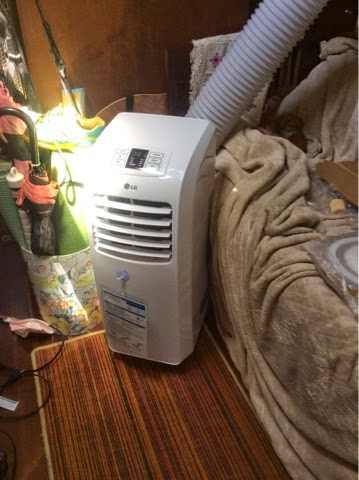 This set up was so-so. Then I tried venting to the engine room, which was a total fail. Back to the port light but with gobs and gobs of insulation foam stuff and duct tape. But it still doesn't freaking stay, keep the water out, or cool the boat enough. Can we just catch a break over here!? 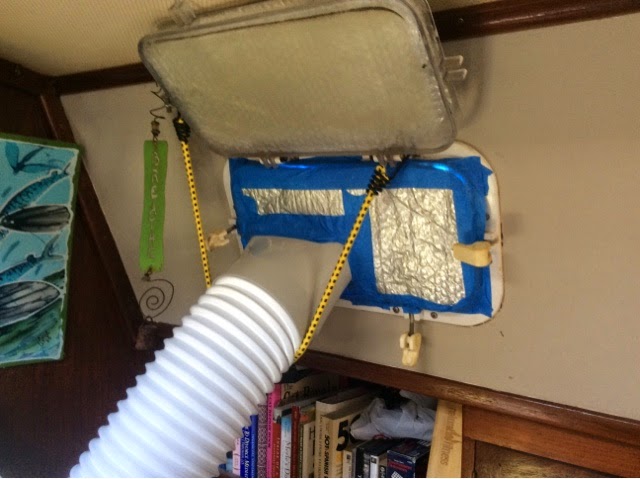 I used a piece of plexi to make a rain shield but the problem is the water still settles in the sill and doesn't drain out. I've got a new plan for that to work on this weekend. But I did drill through the plexi successfully after earlier having an idiot guy try to show me a stupid way that would have cracked it. Now I feel I will be able to drill into my plexi temp hatch (that leaked buckets of water during a recent storm)... just takes patience and a brain, things that guy sorely lacked. There's a story to be told there, but quite frankly, he's not worth the effort so I won't. 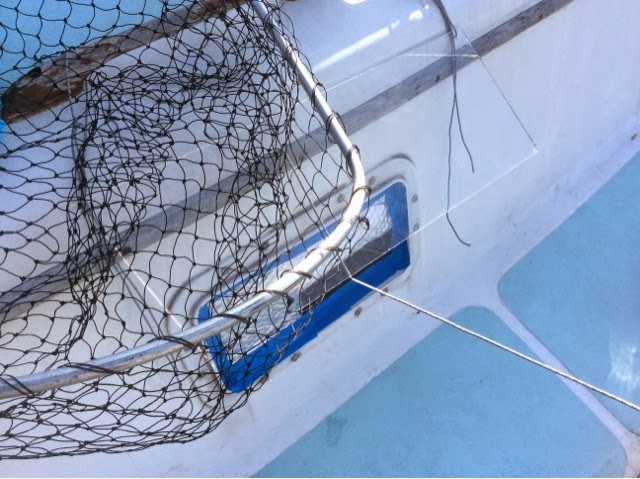 Pup dog wasn't loving the new slip and boarding so I bought new mats for her since she's afraid to walk on bare decks. These still slip a bit, but are better, and very squishy (they are kitchen mats not door mats). 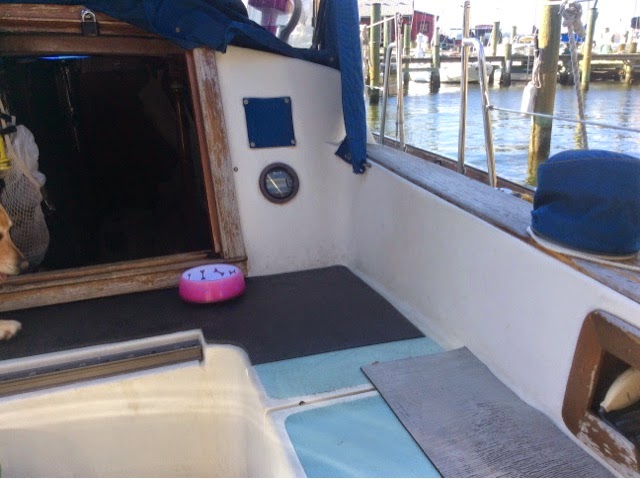 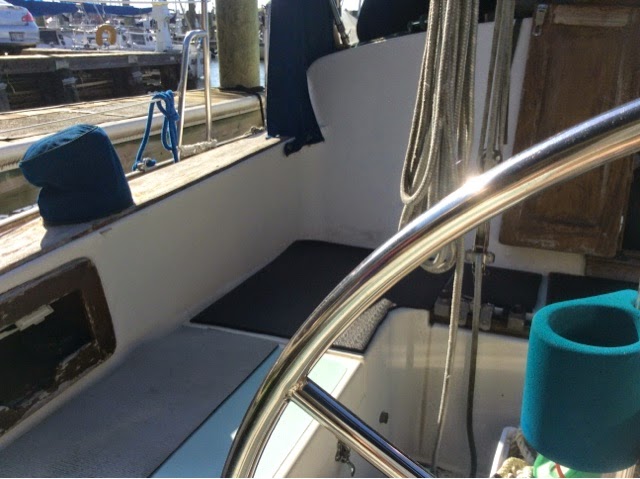 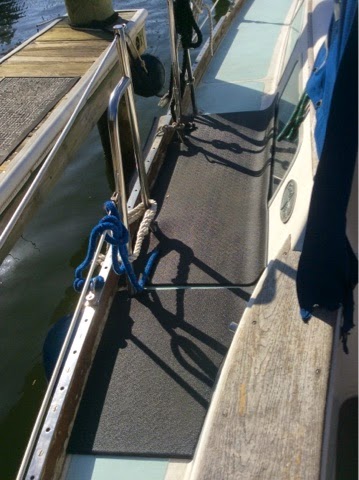 The smaller piece on the side deck kept sliding and apparently went overboard one day when the dog walker took pup out. C'est la vie. Pup is much more confident jumping to the finger pier since I nailed down some door mats, which were too slippery on the decks anyway. 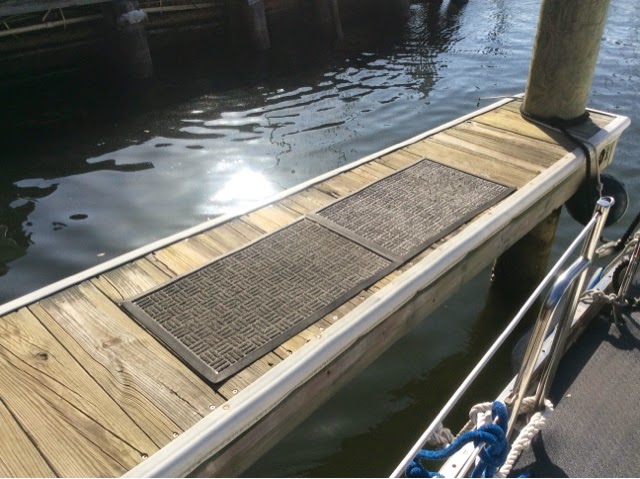 Since I've become a dock queen against my will, I decided to embrace the suck and have a deck garden. I have a black thumb so the pink flowers already look sad compared to the photo. But I planted some zucchini seeds and have basil and mint. 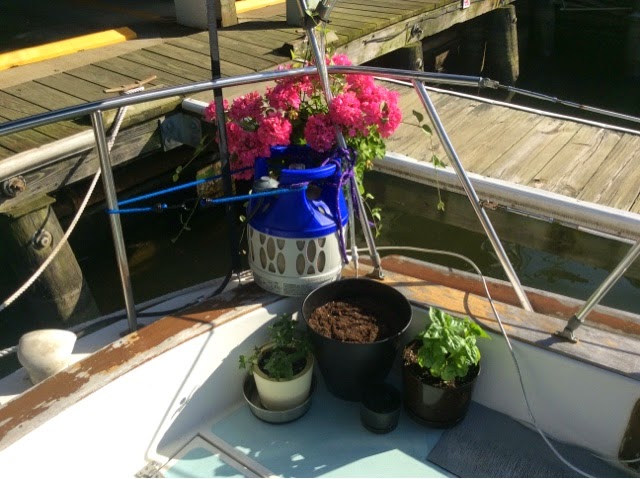 The eisenglass on the bimini was cracked and yellowed, so I just cut it all out. Now it's just sort of a bizarre canvas skeleton. 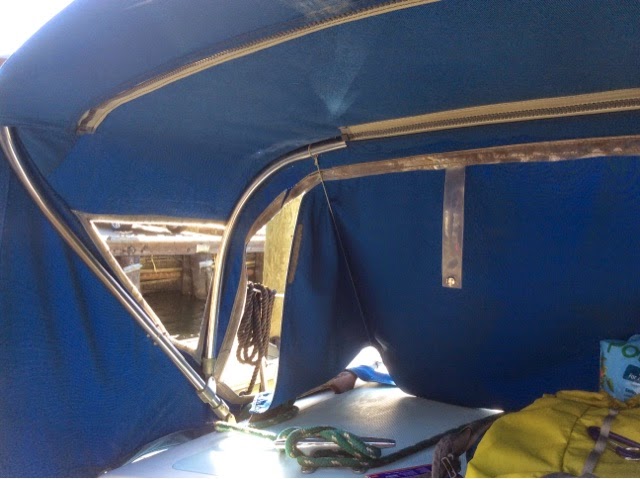 I took a Mother's Day selfie with my fur-baby. I would've been a great mom; oh, well. I've got awesome pets so I'm blessed. 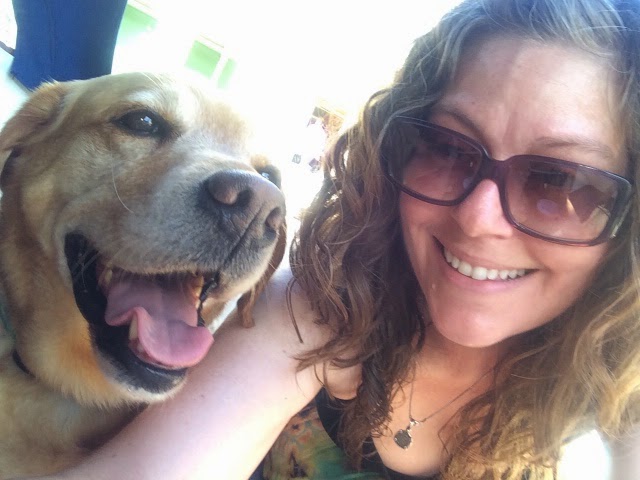 Basically everything on the boat is broken, and that now includes the fridge. So I had to put everything in a cooler. Now I'm trying to get by with block ice in the icebox but it melts so fast, is expensive, and probably doesn't keep things cold enough to be really safe. A guy has said he'd drop off a mini fridge but I've learned the hard way that there is only one person in the world I can rely on--moi! 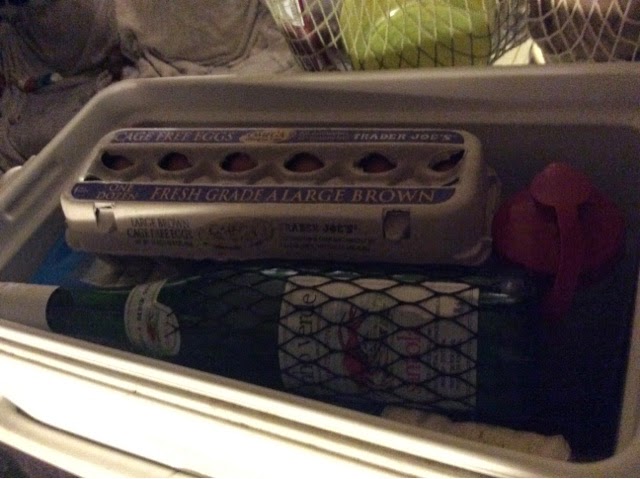 But, hey, my baby zucchinis are sprouting! Yay! I planted these seeds and now they are turning into real plants and I haven't killed them yet. Miracles happen! 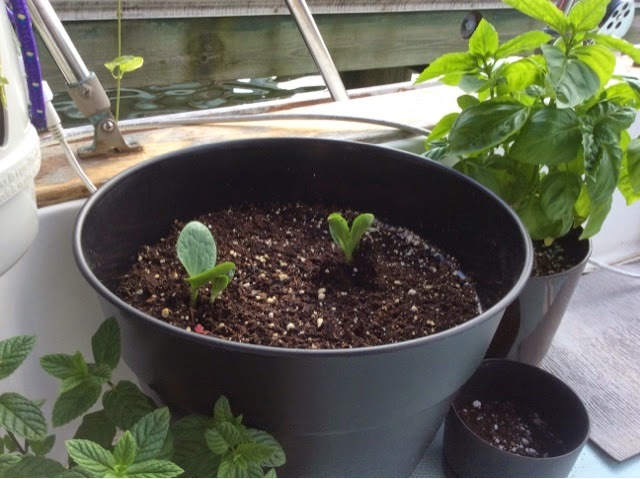 The batteries are still not fully installed and the technician I hoped to have come work on that and some other projects doesn't respond to my emails (though I always paid him promptly and even offered cash). I'm trying to pay people and still they don't come through. I'm killing myself commuting to DC to work but it takes a week of work just to pay for the cost of the commute (bus fare + dog walking). Another week of work to pay for the slip. I can only get six hours of sleep a night with the commute/work schedule and no exercise, so I'm falling apart at the seams. Just impossible to make any headway. Somehow I have to get the boat in decent-enough shape to get out of here and get her somewhere more affordable and where there is potential to have a life.

I'm going to try to be better to myself. To go do some of the things I want to do and stop spending my little "free" time doing things I'm not excited about. So back to flying solo! Two bands I like are playing tomorrow night at two different spots downtown so I might just get all dolled-up and go out a bit if I can get enough done not to feel overly guilty. We'll see.

Everything in my life seems to be broken, but somehow I manage to bend, and roll with it, and keep going without breaking. I'm not sure how, and sometimes I just get so tired. But every night I tell the boat how much we love her, how she has saved our lives literally and figuratively, how I am trying, how I am so sorry I haven't brought her back to her former glory. We just need her be resilient a little longer, to be patient a little longer, until we can breathe new life into her.
Posted by Suzy at 6:54 AM 3 comments:

Labels: air conditioning, galley, gardening, liveaboard, marine refrigeration, pets aboard
Newer Posts Older Posts Home
Subscribe to: Posts (Atom)
a heartfelt thank you to my readers and friends i haven't met yet. i hope you enjoy the saga of our adventures and foibles. projects and plans do not always go smoothly. i am a smart, resourceful girl. i do things my way, on my schedule, in my budget. this is an unvarnished look at the life of a girl trying to get by.