Somehow I manage in the worst of circumstances to meet the most amazing, generous people.

Earlier in the afternoon I walked down the road just a few doors to the Tamanu resort to see if I could get on their wifi. I expected it to be more expensive than the official telecom accounts, but it turned out that all week I could have had wireless by time instead of megabytes, which would have been a big benefit for uploading photos, videos, and viewing websites. The atmosphere is very elegant, but casual, and just serene. I made sure to wear real clothes, nothing torn or dirty (whereas the captain only wears scissored wife-beaters and shorts showing far more butt crack than anyone cares to see). There was a guest at the desk inquiring about booking a lagoon cruise so I waited for her to get help before asking about the wifi. The guest asked where I was from and I mentioned that I was from the States and looking for a boat to sail on to Niue and Tonga to get closer to Auckland for my flight home. The front desk agent was as sweet and helpful as can be and told me to just go ahead and relax on the lobby couches and get online. It was also the nicest, cleanest restroom I've used since Los Angeles, so that is nice. I got a lot done online in just 40 minutes, so I hung onto the last 20 minutes of the hour I'd bought to use later. I heard that Saturday they have half-price happy hour so I figured perhaps I'd come back by in the evening.

The captain was all piss and vinegar when I was back at the house and said I should fly out on Monday. I think it's nonsense for me to pay my airfare from here to Auckland so I will push for him to pay it one way or the other. He gave me some total BS that I'm not ready for 1000 miles of open ocean sailing, but personally, I think I'd be risking my life with that nutjob at the helm. I've got far, far more perseverance, physical stamina, and mental aptitude than him, not to mention just generally being a good person instead of a schmuck. He gives a fake face to everyone he meets, is a consummate bullshit artist, and then has nothing but snide remarks about everyone on the island. He thinks he's liked here but locals definitely don't care for him. That is clear both from their body language and what they acutally say to me about how he should've sought local help for things long ago, has had other crew come here and quit, should have married a local girl if he wants to be a part of the community, and on and on. So, because I wasn't going to sleep with him and finally just told him to shut up, stop talking, that he was like babysitting an 8 year old, he will run around saying I wasn't compentent crew. Well, all I can do is call bullshit on that, and anyone who knows me and knows him, knows very well where the truth lies. 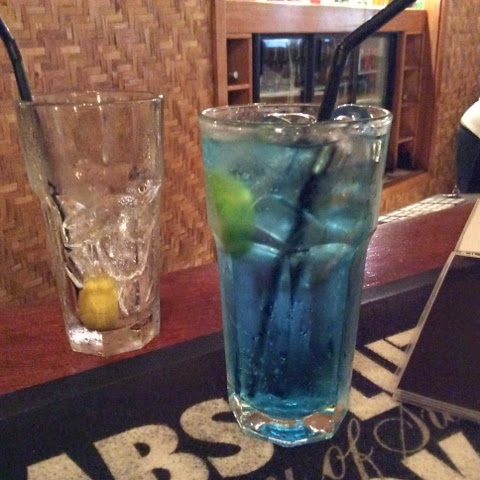 So after his bellyaching about me leaving, I decided I would get out of the house and stroll back down to the lovely Tamanu resort for happy hour and some internet. I sat at the end of the bar and browsed the happy hour drink menu and a lady at the other end of the bar asked if I'd found a boat yet to sail on. It was the guest from earlier in the afteroon. I told her I hadn't and though I hoped to hop a boat to Niue and Tonga, I may have to fly out Monday for Auckland three weeks before my flight home. I said I'd love to see New Zealand, had heard wonderful things about various sights to see, but couldn't possibly afford a hotel for three weeks. And before I knew it she told me I could come stay at their house on the beach as long as I need, not to worry about it at all, that they are south of Auckland and just 40 minutes from Rotorua, which everyone says I must see. I asked her if she was serious, told her I would really take them up on that. She walked right over, got paper and pen from our wonderful bartendress, and wrote all their information, plus her brother's name in Auckland if I got in a jam there. She said if I get my international driver's license I'm welcome to use one of their cars, too. She said they'd be at work all day so I'd really have the house to myself and that there were plently of beautiful routes for me to run. I actually had to hold back the tears that strangers would be so welcoming and generous to some crazy girl sitting at a bar half-way around the globe from home.

I asked the bartendress where the cheapest place to crash a night on the island would be, so I could avoid even going to the captain's boat tomorrow night. The "paratrooper motel," which I have walked past, was the suggestion. The ladies from the resort and at the bar asked where I was from, when I was leaving, where I was staying now. They quickly knew what house I'm at just up the road and after a while the front desk agent came over and asked when I need to be out of the house tomorrow. I told her probably by noon or so. She pointed out her husband down the bar and her one-year-old daughter running about. She said she has several children and the house is active and noisy, but it would be a safe place for me to stay the night tomorrow, and they could pick me up after they go to church in the morning. It took a minute to sink in that these strangers were also welcoming me right into their home, without hesitation willing to drive from the other side of the island to pick me up. Just, wow. And of course, the women all well understood the conundrum of men expecting more than was offered or reasonable to expect. So I am incredibly blessed by the kindness of strangers and can say that once one breaks through the initial circumspection of locals, they welcome one as if an old family friend. It is heartwarming, life-affirming, and kindnesses I will never forget.
Posted by Suzy at 4:57 PM