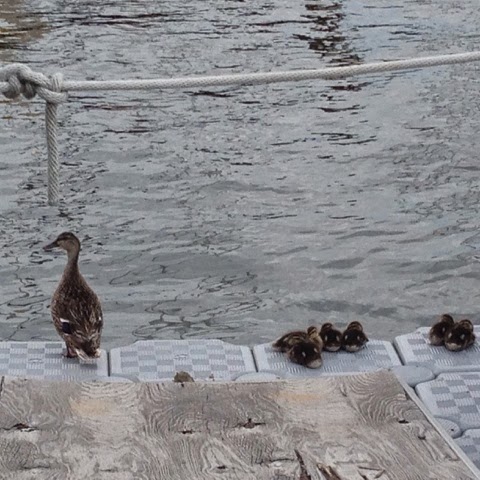 It really doesn't get cuter than ducklings. Well, unless it's baby bunnies. I never see bunnies here... I think all the foxes get them. Growing up, I had pet ducks and a rabbit. Plus mice, a rat, a chameleon, and many fish. I think I've always preferred non-human animals to people. I suspect I'll be better suited to an anchorage full of wildlife than a marina full of people, noise, rickita-rackita, gossip, and uninvited advice. Four months into an annual contract at this marina and I regret it. If only I had followed my own advice to never, ever sign an annual slip lease again. 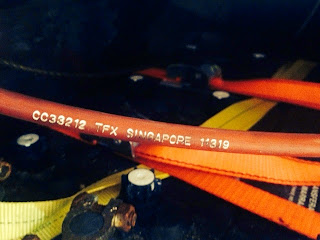 The plan was to fix the engine controls last weekend but things didn't fall in place. I crawled down into the engine room a few weeks ago to water the batteries and luckily the stamp on the transmission cable was somewhere I could get to to read it. I ordered new control cables, 9 and 12 feet, and upgraded from "red jacket" to Teleflex "extreme." The big difference: the extreme can tolerate a 4 inch bend radius rather than 8 inches for the red jacket. I don't want to put any tight turns in the cables but knowing they can handle a little tighter curves is nice. Yesterday the diesel mechanic I've befriended came by to help me install the cables. 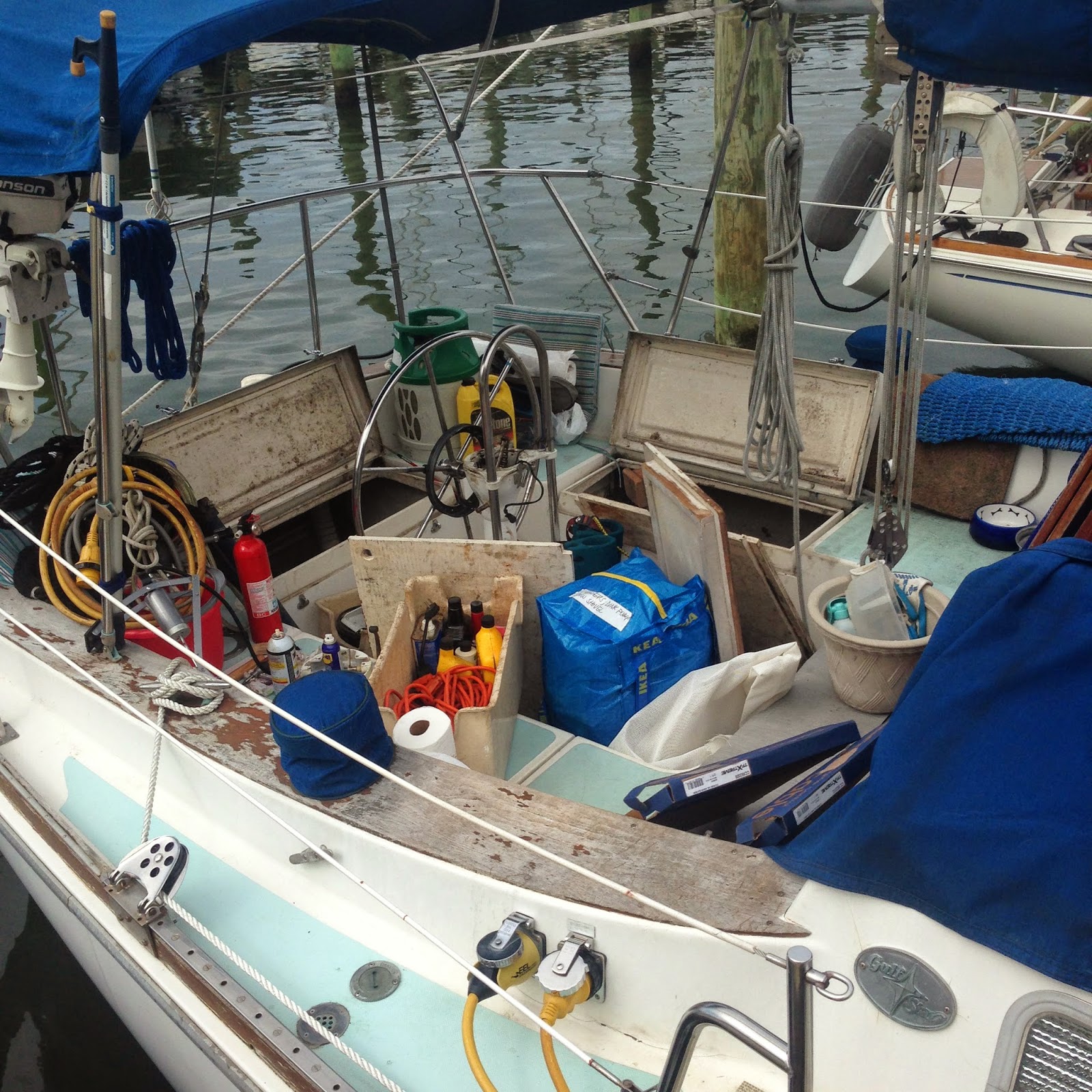 The thing that is both incredibly frustrating and interesting is that these sort of projects are puzzles about how to put all the pieces back together. I had a cup full of screws that had come out of the binnacle and steering mechanism, but couldn't tell you which one went where. I was trying various screws on the housing that holds the cables tight inside the binnacle, and we discussed why each one would or would not make sense. Then I was digging around inside the cup and "eureka!" a big, short screw and washer with remnants of white paint. Clearly, this was the one that had been on the binnacle when it was painted. One section of the puzzle solved. Off to a good start! The mechanic was not expecting me to be much help so I think he was surprised when I had grease up to my elbows and shoved my (conveniently smaller) hands down the binnacle to wiggle pieces in place while he pushed the steering column back in. 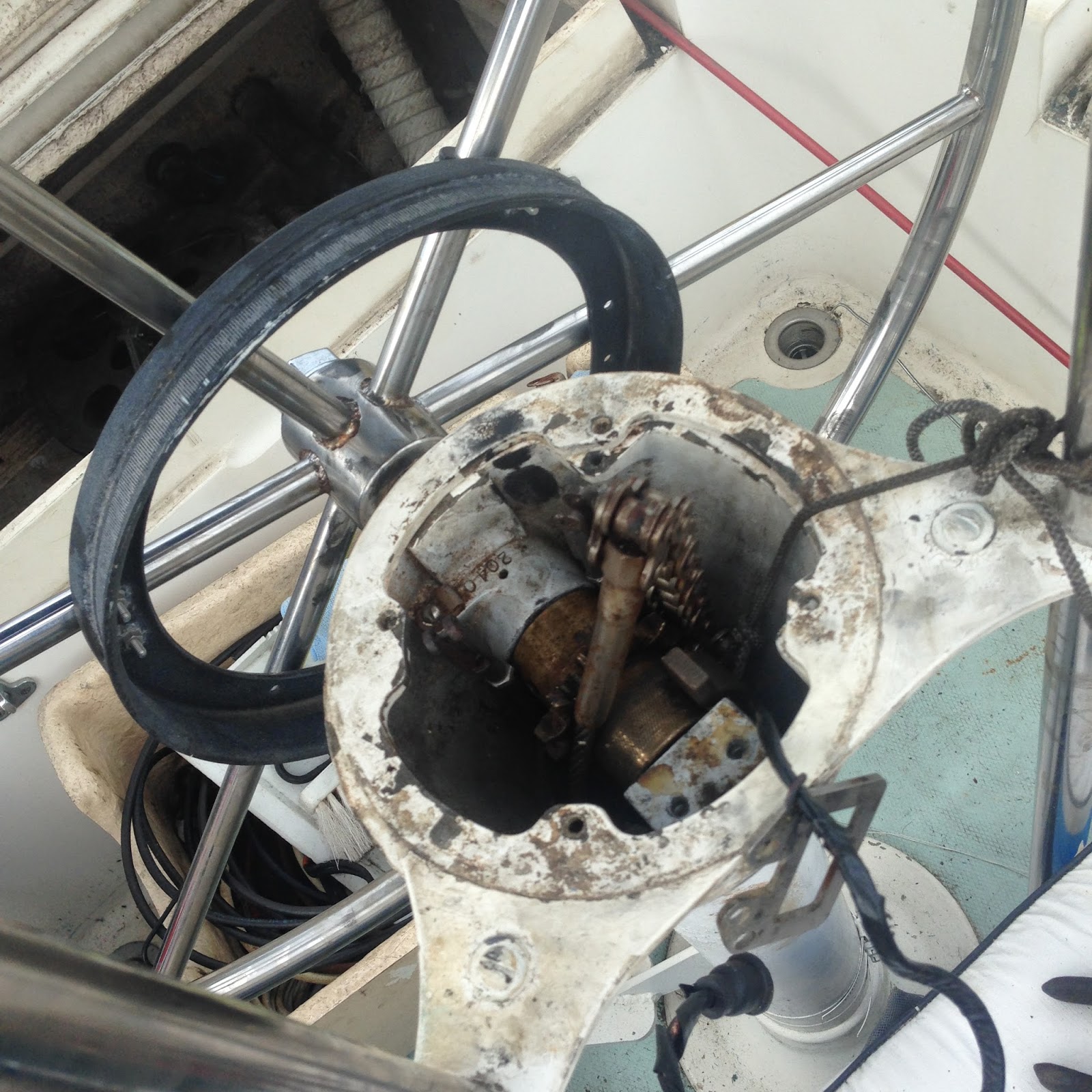 It became even more of a two-person job when my greasy, slippery little hands managed to lose ahold of the string tied to one of the chains that runs to the steering cable. It was one of those slow-motion moments when all you can do is stutter... no... no... no... and down, down, down it went into the dark recess of the binnacle. We spent what seemed like an eternity trying to hook the chain with a wire but ultimately had to disconnect the steering cable and use the slack to push the chain far enough up the binnacle that I could see it to catch. I held onto it with both hands and didn't want to let go! We had to call it a day, but next Saturday we should be able to get it finished up and get this poor boat out of her slip! And whereas I learned nothing about the steering system and engine controls when they were disassembled, now I know exactly what is going on inside the binnacle and will be better prepared when I need to troubleshoot or repair these parts down the line.

A friend of mine dropped by for a couple beers and made the mistake of getting drawn into conversation with an overly loquacious kid from a boat passing through. The kid never stops talking and takes your presence in the cockpit as an open invitation to chat. He also likes to keep one foot on the dock and put the other on the boat. I realize he's just a kid, but one would think a liveaboard kid would have decent boat etiquette not to touch others' boats without permission. The dad doesn't do anything, but gratefully the floppy-haired guy who appears to be crew rescued me and cut the kid off this morning and took him to their boat. But this evening, no rescue in sight and the kid just kept yammering. I guess it's hard being a liveaboard kid without regular school friends and such. As he kept chattering on I was saddened to see how early the stereotypes develop. He asked where my friend was. I said he's back at his house where he and his girlfriend live. He asked where the guy who owns the boat is. I looked at him quizzically. "What boat?" I asked. "This boat," he said, "where's the guy who owns this boat?" Sigh. "This is my boat. I own the boat. It's me, the dog, and the cats." He looked sort of confused. We mermaids sure are a rare breed; and dumb guys all too common.

I was planning on working right up to my departure. The project I'm working on might last this next week, but fingers crossed it will continue as close to my departure date as possible. I've got to cover bills while gone and would like to be able to enjoy myself a little. If I can scrape enough together I may get the GoPro I've been wanting so I can get some action shots and video to keep you all posted on my journey. I'll be out of contact during passages but should have access to Internet here and there to upload posts. 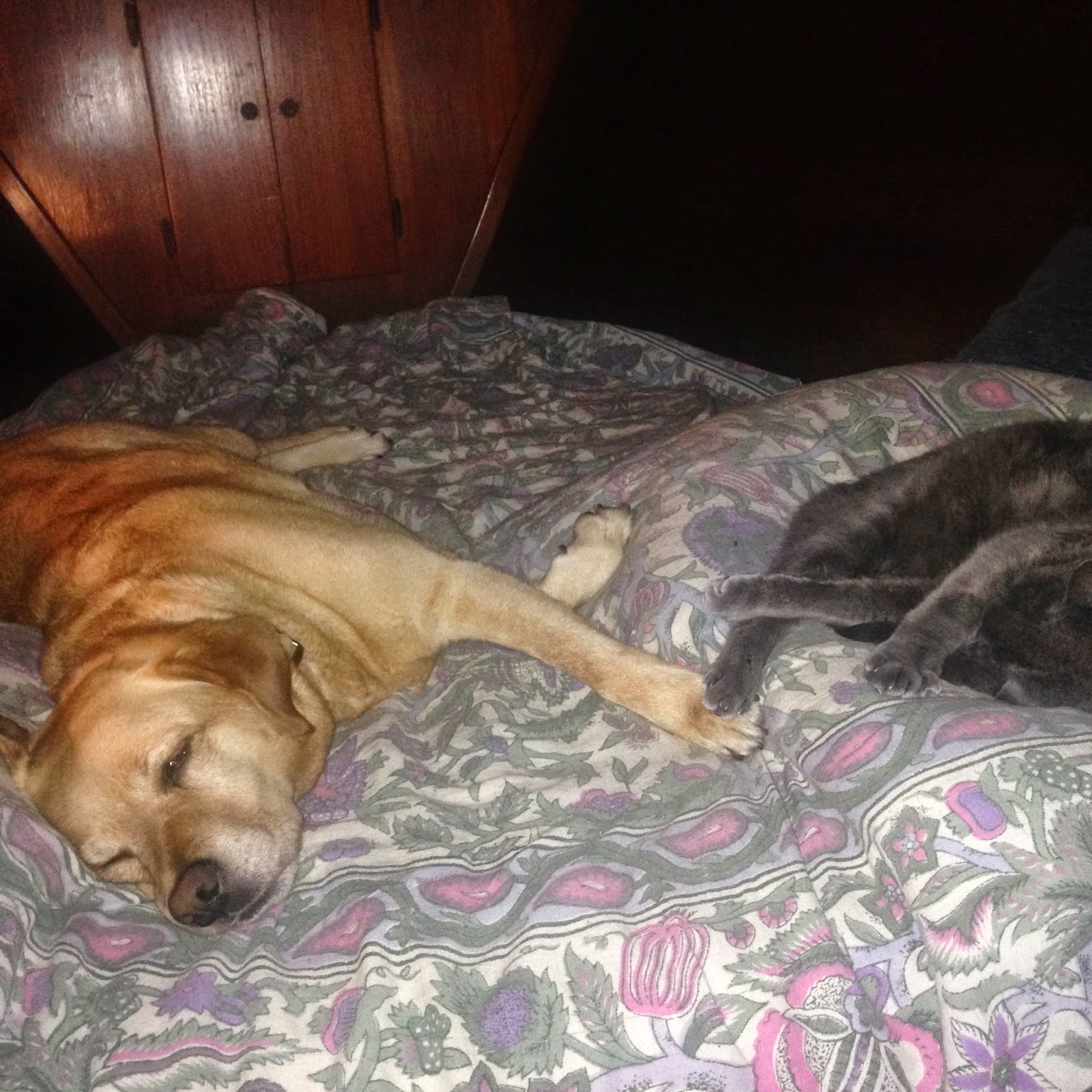 A friend is going to boat and cat-sit while I'm gone and I think pup dog will go to another friend's house for "sleep away camp." I know they aren't human, but they are still my "kids" and they are closer to me than any people in my life. I just hope the "sitters" can show them compassion and attention, because they hate being separated from me and from each other. Look at how adorable they are holding paws while napping. I think my friends are worried I won't come back, but even if I were in paradise I couldn't leave my loyal pack behind. But to give everyone a little peace of mind that I'll return, at least for a bit, I've got my return ticket in hand. So, two weeks from now I'll be on a plane heading for sailing, snorkeling, fishing, and most importantly, adventure.
Posted by Suzy at 10:39 PM