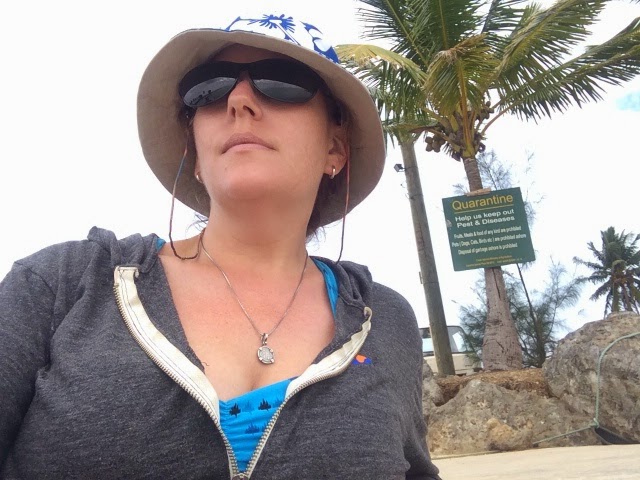 Wednesday, circa 3:00PM: I'm sitting on the dock at the Aitutaki harbor. It's a pretty quiet place. When I finally managed to get online earlier in the afternoon I was sitting across the road from the telecom office on a low wall in the shade. The majority of folks get around the island on scooters, and a woman on a scooter pulls up to ask if I'm alright, if I'm looking for something. I explained I was just trying to find a spot where I could get some wifi. It's funny how people are here; either very friendly and helpful, or distant and circumspect. I think I have an easier time than a lot of folks because I'm willing to just go wherever, ask locals if I need help, and if they are distant at first they usually warm up to me eventually. But I'm not everyone's cup of tea. So, I'm sitting on the dock.

I'm not sure I'll travel with anyone again for a very long time. I don't know why when people travel they feel they have to spend every moment together, eat every meal together, et cetera. I can take a few hours of that a day at most. That's probably why my nice 6 miles this morning alone were the highlight of the day. The captain seemed annoyed that I didn't want to go back to the house for lunch, but I was trying to be efficient and use that time to get online and take care of my affairs, especially since I hadn't been able to let anyone know I'd arrived safely. When I met back at the dock to get back to work on the boat for the afternoon he took the dink and left me on the dock. I sat there for about an hour and a half and then just walked the couple miles back to the house. I suspected that despite my best hopes to the contrary, he expected more than just "crew" for the trip and was being pissy, and, indeed, my suspicion was correct. I'm ever hopeful that not every single guy on the planet has an agenda, but 99% of the time my hopes are dashed. Sigh. I don't think he was satisfied when I told him "Dude, you are totally in the friend zone. And the friend zone is Hotel California; once you check in you can never leave." C'est la vie; I just never learn.

Thursday evening: Yesterday we found out that the new batteries for the boat and the paint for the deck had not made it on the ship that had just been unloaded. The guy in Rarotonga told the captain that they wouldn't make it over until September first. I honestly don't even know how to fill two weeks here. I mean I can always run and write, but I tend to get bored out of my skin just laying on a beach. And in five days here I've only been down to the beach once because I'm cooking and cleaning around the clock. I've only seen maybe two cute local guys. Between everything being very expensive and the conservative culture, I don't really see a lot of partying happening. All the tourists seem to be couples, so I don't think I'll find some hottie Kiwi or Aussie to sweep me off my feet.

Gratefully, I didn't even head down to the dock today. I ran my six miles, tried out the solar shower (a big improvement over cold water even if no pressure), hand washed my laundry and the captain's, hung everything on the lines out back, and cooked all day. I kept telling people this was not a vacation, now perhaps they'll believe me. I mean, who travels half-way around the world to hand-wash laundry, take cold showers, and be eaten alive by mosquitos for vacation?   Not this girl. We have to move out of the little house on Sunday, which means moving to the boat. Well, the facilities/showers at the dock are filthy, no paper, and certainly no hot water. The captain won't get the head aboard operational despite my lobbying and plans to just bolt a toilet seat off the aft deck. Shitting off the back of a boat is most definitely not my idea of paradise. So moving aboard will be a major downgrade. Ah, living the dream...

Anyway, I chopped and chopped all day, garlic, basil, tomatoes, onions. The pasta sauce smells pretty good and the pesto will be delicious. The chicken still hasn't thawed, however, so it may just be pasta tonight and chicken tomorrow. Today I've been surviving on PB&J and cheese sandwiches. Plus a small apple and half a coconut. And Lion Red beer from New Zealand. One of the local dance shows is at an adjacent resort tonight, so I'm hoping to go down there and watch it. They have internet there but I think I have to buy their credits and can't use my ones from Telecom Cook Islands. It may be worth it, though, not to have to schlep all the way "downtown" to get online.

When the captain came home for lunch he said the local boy helping him went up the mast, so I won't have to do that after all. He also found out that one of the locals he's friendly with has still been lobbying on his behalf for him to be able to start a business here. The trip to Tonga is to find a friendlier place for a foreigner to start a business (though I'm not sure Tonga will be that much more welcoming). The captain has been living here for six months or so and would rather stay here than go to Tonga, but had been told the island council wouldn't approve him. Now it's sounding like if he agrees to certain terms, the council may approve him after all. He should know after their meeting next Thursday. He asked if I'll be really disappointed not to make the trip to Tonga. I told him no worries, I'll roll with it. But of course I didn't come to hang out in the Cooks for a month and still have to figure out how I'm getting to Auckland for my flight back to the States. Money is really tight so as much as I'd love to fly to New Zealand and hang out there for a couple weeks, there is no way I could afford a hotel there. [Any readers in New Zealand, Tonga, or Australia want a houseguest for a couple weeks? I'm a really good cook.] There are a couple of boats in the harbor here and I'm curious if I could get a hop onward with one of them. The Swiss guy who's single-handing came from Venezuela down the coast of Brazil and around Cape Horn. Unfortunately it sounds like he's leaving Monday for Palmerston to deliver some parts needed for their disabled electrical supply. If I could just sail onward with someone and make it close enough to get a flight to Auckland, that would be ideal. I don't see any way of lasting 3 weeks here. The captain just never stops talking or singing or humming. I don't need or want entertaining and I don't need a soundtrack or for every silence to be filled. I looked up and saw the brilliance of all the stars in a dark sky, without all the usual light pollution of the city, and before I could even take a breath and enjoy that rare moment he was yammering on about the stars and the Southern Cross, and on and on without end. I was screaming inside, "Please just shut the fuck up!" Sigh.

I'm very, very glad I brought my own gear and only wish I had grabbed a couple more items, like my own solar shower, that I thought about and then passed up for space reasons. Other things I'd add if I did this again: a mosquito net, a sleeping bag, and a hammock. But now that all the gear I brought for the captain is unloaded, my gym bag is folded down into the bottom of my large duffel and everything I have will fit in the duffel and my small backpack. My friends in Annapolis know I was sad not to buy a GoPro camera to bring on the trip but the cost was just prohibitive. The money I would've used for it was more responsibly spent on a waterproof case for the iPad and a solar charger that will charge small items like my phone, VHF, and iPod, and also charges a rechargeable battery pack that will charge the iPad. One of my best buys for this trip, and that I should have made as soon as I moved aboard: Sea to Summit Tek Towels. They pack down super small and light, pull the water right off of you, and dry in a couple hours. I think they'll become my basic daily towels aboard, though the large is just a bit too small to cover all the important parts if I'm wrapping it and walking anywhere, so an XL will be on my wish list.

So, I'm not exactly enjoying it out here in "paradise," but every adventure is an opportunity. Now I know it's unlikely I would want to permanently settle someplace like this, I can confirm I prefer to travel alone but will always be on the lookout for someone I can enjoy traveling with, and it's always nice to have a new running path now and then. I have a flight on September 15 from Auckland, but what lies between now and then remains to be seen.