off for a sail

Got in another run along the waterfront this morning and took some great photos. Unfortunately, stopping along the way to snap photos meant I got back from the run too late to make the walking tour from the hostel so I'll try to catch the one on Monday. I extended my room here at Nomad's for another 4 nights, so I'll have time to check out the city a bit, go to the zoo, and take the ferry over to Waiheke Island for winery tours and tripping around for a day out there. I haven't settled on what I'll do after that though I definitely want to see the Waitomo Caves with the glow worms and might even try to get to Queenstown if possible since so many people have said it's a not-to-be-missed place. Still need to sit down and sort the tight budget to see what I can swing.

Yesterday I passed a Korean restaurant with just Asians at the tables and a "top ten cheap eats" sign on the door. I decided to give it a whirl for lunch since it was right around the corner and I needed to get laundry done before going on the sailboat races this afternoon. For NZ$13 I got a plate of rice with spicy pork and vegetables, along with four small bowls of sides. I know one was cabbage and another bean sprouts (in a light vinegar dressing reminiscent of German cucumber salad), but all of it was delicious. And I manged to eat all but a couple grains of rice using just my chop sticks. 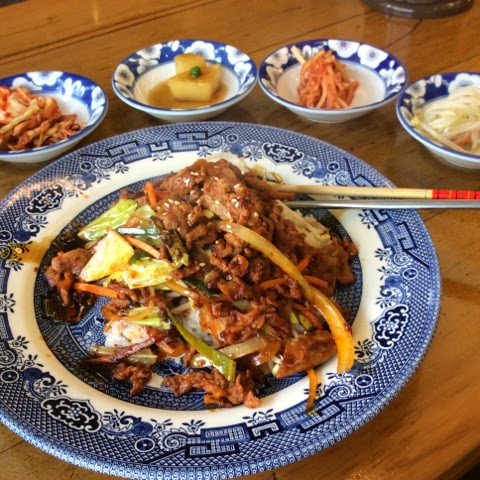 This afternoon I went out for the Friday night Rum Races in Auckland harbor on a Hanse 43 docked at the Royal New Zealand Yacht Squadron, somewhat "home" of the Americas Cup (so just don't mention this past year). I've only been racing a handful of times and it's not fundamental to my nature, but I always try to look at it as an opportunity to learn and I was thrilled at the chance to get in some sailing after so much sailing disappointment on this trip. I forewarned that I wasn't good for much but rail meat, and mostly did alright at that other than two tacks where I didn't scramble quickly enough and found myself somewhat hopelessly on the low side unable to pull myself across. The second time I had been poised to launch myself quickly to the other side during the tack but waited a nanosecond too long and the fulcrum swung against me. I began sliding backwards, head first, with little to grip to keep from sliding ever closer to the lifelines and the cold waters below. I shouted for help and scrambled to grab onto other crew to pull me up to the high side. Wet decks, a sharp heel, and gusting 30 knots or more; I was grateful those guys managed to pull me across that slippery foredeck quickly! Many thanks to Zane for bringing me along and to the owner, Kim, and all the crew for having me out. I've now seen Auckland from likely the two best vantage points, the water and the sky. And despite my not being the best rail meat out there, we came in first place with our handicap! 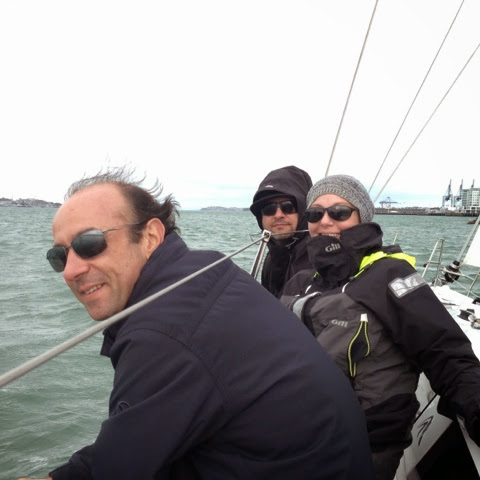 One of the things I most like about New Zealand so far is that it has such great and varied outdoor activities. From mountains to beaches, geothermal hot springs and caving, sailing and surfing, the rugged terrain lends itself to an outdoorsy lifestyle and mentality that I like. It reminds me a lot of Oregon, but with good weather instead of endless gray drizzle.

Now It's only 8:00PM on a Friday night and I think I need a proper dinner (I inhaled chips, crackers, and brie aboard--it's embarrasing being a bottomless pit for food but when running this girl is always ready to eat). I'd like to freshen up and try to find a place to settle in for some wine and dinner and see if I can find some hot floppy-haired Kiwis out here, but I'm pretty exhausted so that may have to wait for tomorrow night.
Posted by Suzy at 8:00 PM