They may not seem short to some or at least not short enough, but my nails took a major cut-down from where they had been. Both index nails had been severely broken in the past three weeks. I'd feel better if there were some dramatic story of how I broke a nail battling Sandy's winds or one snapped as I wrestled a kraken, but, alas, both fell victim to a sticky cabinet door. In any event, I warned my nail tech that we may be taking them even shorter. But I still had to have my little bling: some purple flowers, which soon will match my toenails, and already match the several dozen bruises, a/k/a boat bites, I've acquired. 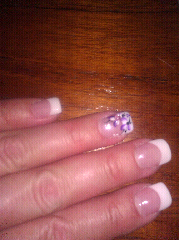