A terrible cold side-lined me for a week, causing me to miss a marathon (which was also to serve as a final long training run for the upcoming 50K). Friends warned me to be particularly careful about the cold now that I live aboard; being in a cold, damp boat can turn a cold into "a quick cab ride to pneumonia" as one friend put it. Now that I feel mostly recovered, I am under the gun to catch up on the many, many projects before me.

One useful exercise I did work on while nursing my cold was a list of all the fixes and upgrades I need or want to make on the boat. There are over fifty entries on the list so far (from small items like changing to LED light bulbs to larger projects like removing and re-bedding all the chain plates). Project Gitrot is in a holding pattern at the moment due to a few wet days and considering whether the rot is simply too extensive to fill and a new mahogany threshold should be installed instead. Only a few days away from two months' aboard, I would really like to have my propane stove and oven up and running as soon as possible, and will try to push that to the forefront in the next couple of days. It seems like a simple enough exercise, but never having even used a gas grill before, I have a healthy fear of making any mistakes with the propane, so this is a project I want some help with.


So far this week has brought some big changes. On Monday I sold my Honda Element. It was, as the floppy-haired sailor had put it, my only asset of any real value. It is very hard to be in such financial straits that I have to sell my car to pay the bills, eat, and make some core boat repairs. But such is life. I reconciled myself to it, and was lucky to have a friend who helped me get through the process quickly, maximize my sale price, and move on.

On Tuesday I signed the lease for my new slip. I am very excited to move! I have the slip as of January 1, but am hopeful the owner will let me come over a little early and get settled in. We'll only be four blocks from our current marina, so still able to enjoy being within walking distance of so much and still have the sense of neighborhood Eastport offers. No long icy docks to walk down; just a short stroll to the bathhouse; currently no competition for the bathhouse; nice grassy lawn for pup dog to play (and piddle); a longer finger dock that may allow me to use the actual boarding gate rather than tying the lifelines back; a better shore power set up; almost certainly an easier in and out of the slip so I can use the boat more; a quiet, scenic view. 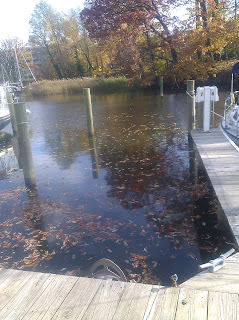 On Wednesday I bought my new-to-me car, a clay-colored Buick Century. Where my Honda was hippy-dippy, covered with bumper stickers, and let everyone in town know where I was, the new car is entirely under the radar. I am already loving the car. Big comfy seats, an easy, smooth ride. A huge trunk to use as a dock box. I had the car detailed so I'll feel like I am starting fresh. Now I need to remove the couple of stickers on it with a blade and some WD-40, load it up, and cover the back seat for pup dog to chill. 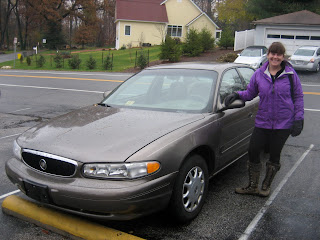 Today I have a friend coming by to look at some boat issues and hopefully help me identify parts I need to purchase. Tonight is the marathon training group party; it will be great to see some friends I haven't seen much of (or at all) in the past couple of months, but bittersweet that I missed my marathon on Saturday.

Here's another of my neighbors. He hung out all morning catching fish. 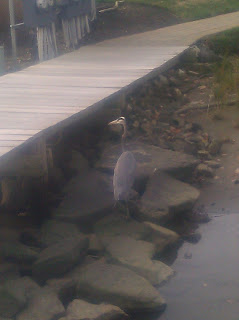 Life aboard is very different than being ashore. But at the same time, it is often just different versions of the same things we once had on land. Instead of deer and fox in my yard, I have heron and otters. Instead of mowing a lawn, I scrub the decks. And, to my great chagrin, instead of the damn gumballs from the sycamore all over my deck and yard, I have bird poop all over the deck from those damn birds perching on my spreaders.
Posted by Suzy at 9:43 AM