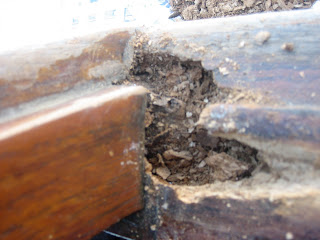 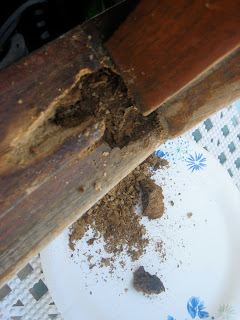 I noticed a small scuffed up, deteriorating spot at the threshold into the cabin not long after moving aboard. The area gradually became larger and I was concerned about the integrity of the wood. One day I showed it to the floppy-haired sailor guy and asked for his diagnosis. He dug around at it a bit and the wood just fluffed off. Diagnosis: dry rot. Prescription: "Git"-Rot. I did not get instructions for cleaning the wound or applying the medicine, but on my little shopping list went "Git-Rot" and when I was at the local marine supply I specifically sought it out. 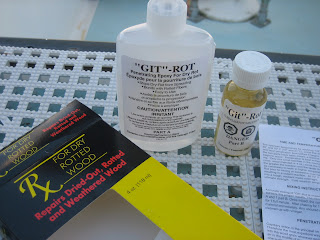 Today, a few weeks later, I began Project "Git"-Rot. A few days ago a friend had looked at it and used a dull knife to test the extent of the damage--significant. The likely source of leaks down the bulkhead at the navigation desk/electrical panel and galley. I was advised to dig as much out as possible before filling it. 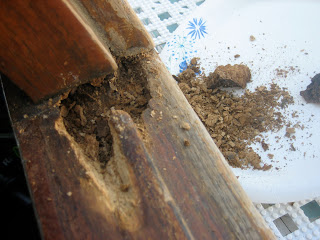 I began digging out the rot and initially planned to throw away what was being removed. Then I read the product instructions. While I knew that the area should be as dry as possible and to use a spike or drill to put holes in the areas around the rot for the epoxy to fill, I did not realize that sawdust or the shredded rotted wood needed to be used as filler in order to maintain the contour of the wood piece. I began to save the shredded wood and what was wet was set aside to be dried.


I also learned that the product is a two-part epoxy that must be used within 20 minutes of mixing and that it may heat up so much within 20 minutes that the plastic container actually melts. Not quite sure how I am supposed to dispose of it if the bottle is subject to melting right in my hands. 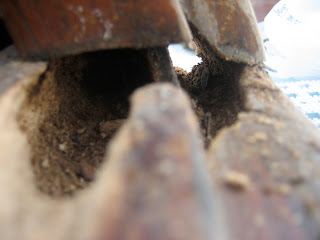 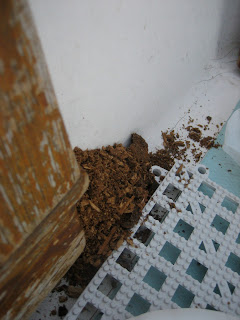 I used a table knife, spoon, and large and small needle-nose pliers to work at the rotted wood and try to get it all out. Based on the angles of access and the extent and location of leaks, I am concerned I won't be able to reach all the rotted areas. I may drill holes in the threshold to allow hidden areas to be filled. As you can see, the rot went all the way through the side of the door frame. I'm not sure how to protect the fiberglass from the epoxy that I need to have spread all the way through that hole. 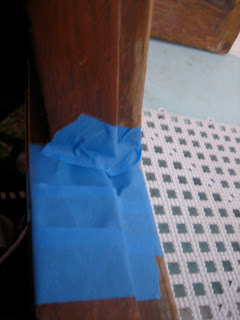 With sunset approaching and knowing the wood was too wet to undertake the application of the epoxy today, I covered the holes with blue tape to try to keep extra moisture from the night's frost out. I will likely try using a hair dryer to help dry the wood before applying the epoxy in the next couple of days. (To be continued...)
Posted by Suzy at 10:01 PM