The hatch door to the boat has been broken since before I bought it. It has been an inconvenience setting it in its place and the other day I finally took a stab at a fix. I had sought various opinions on how to tackle the problem. On the repair side there was a mostly even split between folks recommending Gorilla Glue and those recommending West System epoxy. The floppy-haired sailor guy, (who is always right mind you), strongly urged me to simply draw out a pattern and make a new door. I trust I can obtain the tools and figure out how to fashion a new door, but decided to first experiment with West System epoxy since it has so many uses on a boat and this would be a relatively harmless place for me to learn how to use it. If the epoxy doesn't work, I can always make a new door, and I'm sure I will want to do so eventually. 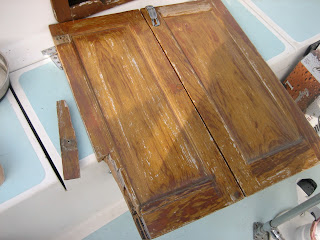 Here's a before picture with the hinges already removed from the door.

I used West System 105 resin, 205 hardener, and then added adhesive filler to thicken the mixture to a peanut-butter-like consistency. I think the first batch was not as thick as the second, which filled gaps better. The instructions warn that one only has about 15 minutes to work with the epoxy before it begins setting, so my friend Mike and I were trying to work quickly and learn on the go. It was definitely a two-person job to have the pieces held together properly while the other applied the epoxy.

Here's the work in progess and then clamped to dry: 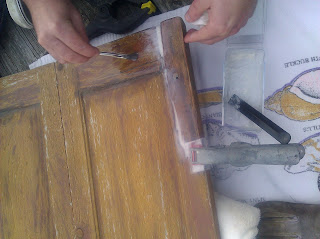 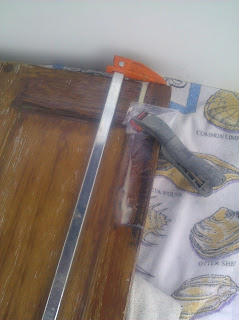 Epoxy is supposed to be somewhat set in a few hours but not ready for load-bearing for 24, but that also assumes 70 degree weather. Epoxy cures more slowly in the cold, and we've been bouncing between about 38 and 55 here in Annapolis the past few days. After four hours it was still very sticky and even the next morning was slightly tacky to the touch. After 24 hours it seemed generally hardened, so I removed the clamps and have been placing and removing it very carefully. 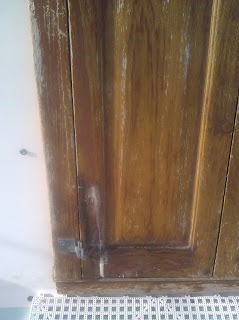 Here is the door in place. The hinges still need to be reattached, but some screw holes at the top must first be filled (likely with dowels) before re-sinking the screws.

But what did I do for 24 hours without a door?

Maximus escaped no less than 6 times while the door was out of commission. When the weather is nice I place a dog gate across the door to keep the cat in, but he's smartened up and realizes he can just push it out of the way because it is very lightweight. Luckily, Max responds quickly to the sound of a rattling food bin so I was able to keep him from running too far down the docks. 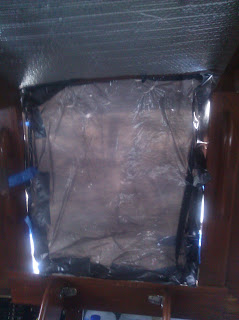 The other problem being without a door was the cold. It was getting down to 38 degrees or so overnight and windy. I had little choice but to improvise, so I taped a black garbage bag over the companionway. Outside I simply used blue painter's tape and then rested the dog gate against the bag. From the inside overnight I used duct tape to seal it up as best I could to keep heat in. Here is a photo of it just lackadaisically taped during the day when I was coming and going frequently. So elegant, no?


Even without the door on its hinges, having just one piece to insert and remove without having to try to "set" the two broken pieces together has been a big improvement.  Eventually, I will undertake "Project: build new hatch door," but I am hoping this will be a functional solution in the interim and it let me take my first stab at using West System epoxy so I will be more confident and prepared for the next time I need to use it.