ice on the water

This morning the floating dinghy dock was aground and surrounded by patches of ice. 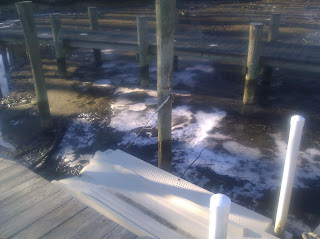 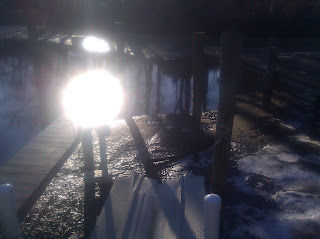 Although outside it was a mere 16 degrees, light bulbs and heaters had managed to keep the engine room about 45 and the cabin about 65. As I walked along the dock in early afternoon it had warmed to 20, and some of the neighboring ducks swam over to see if I had bread (not today, sorry). Only five slips down from me the ducks were dodging chunks of ice floating in the water. 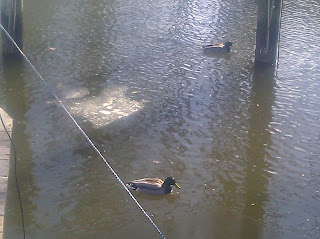 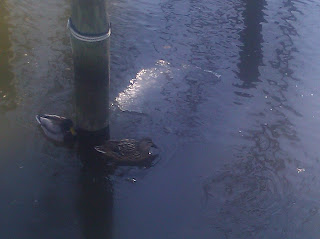 I see the ice eaters plugged in, but they do not appear to be running, so perhaps they are off at the breaker on the shore panel boxes. I can't plug in the one in my slip unless I unplug one of my shore power lines, which would mean losing my needed battery charger and my rooftop heater.


Tonight we are supposed to get snow. It is likely to come, mostly because I took down my tarps yesterday. Surprisingly enough, the bungie-corded tarps stayed through 20-knot winds and higher gusts, but the dodger frame would not stay put and kept collapsing down. I think the only way to keep it up is to put the dodger back on, but the eisenglas is torn and yellowed and it has to be folded down to see well when underway. The wind whipping through the tarps was pretty noisy, I'll admit. Now that I have a smaller 8 x 10 tarp, if I expect a lot of rain and want to protect the HVAC unit I can just tarp over that somewhat simply.

During times of intense financial stress, like now, I tend to have serious nightmares. Sometimes gory. Often involving being surrounded by sharks. A few nights ago I had a nightmare that I was sleeping in an inflatable dinghy, with blanket and pillow. I awoke to find my dinghy had drifted away from my boat and others I was anchored with. I looked down into the water and saw a small shark, very small, perhaps the size of a cat. But I knew where there were little sharks, there would be big sharks. I had no oars, but paddled with my hands a bit. The dinghy came close to shore, hit a piling, and quickly deflated completely. The next night the sounds of my hard dinghy hitting the boat and the tarps flapping in the wind kept waking me to adjust lines, but also seemed to fuel nightmares of my boat taking on water and frantic searches for sources of leaks. I keep hoping a day will come when I can sleep soundly, not worried about bills hanging over my head or intruders breaking in. That day seems so out of reach, but living in constant financial, physical, and emotional "fight or flight" mode begins to wear one down. Some day I just want to nap in the sun on the deck while the sea gently rocks us, at peace.
Posted by Suzy at 6:58 PM