At last, I have fire and water aboard! I took the old water pump (pictured below) to Bacon Sails to find a new one, replace a horribly kinked length of water hose, and pick up some Trident sanitation hose for the starboard vent line off the holding tank. 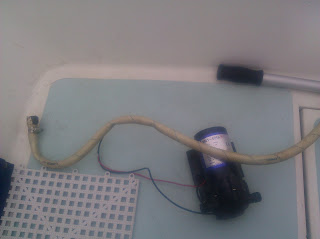 I wasn't able to find a used pump that seemed to be the right size and electrical draw, so bought a new one for $100. I was told I may be able to rebuild the old one, so that will be a project down the line so that I'll have a working spare to use in an emergency. I wanted to do as much of the work on this as I could or at least observe and assist, but as we always seemed to be working on this project as snow or rain were about to start or as the daylight waned, I watched as much as I could and asked questions, but ultimately let the guy I hired do the work so we could just get it done. The fittings on the new pump were smaller than the hose, so I had to wait a couple of days for my handyman to have time to get nipple adapters to connect the fittings to the hose without leaking. Finally, yesterday we managed to do that, used my hairdryer in lieu of a heat gun to soften up the hose ends enough to fit the nipples, and at last I have water flowing aboard again. The pressure is better in the galley than it was before, but still not what it should be, so we will end up disconnecting the hose to the galley sink and checking whether there is a problem there or in the sink fixture, but for now I can wash dishes again. And whereas the old pump would run continuously, (which probably burned out the motor), the new one's pressure-sensitive switch works so it only comes on when it senses I have opened a faucet. I'd still like to install a foot-pump in the galley as a back-up in case of emergency.


Although the propane is not yet mounted off the transom, in the interim I can now use it with the tank in the cockpit and just disconnect and re-connect the regulator which is in the lazarette. In the not-too-distant future, my handyman will help me build a base for the tank, drill a hole from the lazarette through the transom, and mount the tank below the aft rail. We'll make a teak or fiberglass box to protect the regulator from the elements. Today I need to go buy a tea kettle so I can boil water for coffee and tea. I'm very excited to be able to cook and bake again and not be dependent on the microwave, which is a strain on the electrical system and limited my on-board dining options.

When friends were over yesterday to help me get the propane stove going, Maximus slipped out and took a stroll on the deck. He quickly hopped right into a friend's dinghy tied alongside my boat. 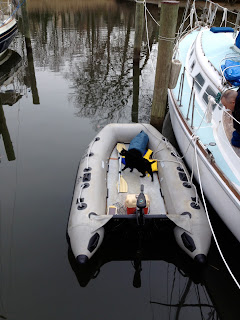 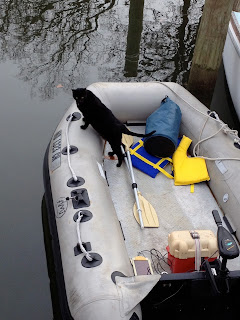 What a trouble-cat! But it was he and his brother's tenth birthday, so I cut him some slack. At least the flock of ducks was not right there to tempt him to jump overboard.

Pup dog has had quite a challenge with winter aboard. I did purchase ice melt (and have shakers both in the cockpit and in the bathhouse ashore) to help us get down the finger pier, however the tides have also been a challenge. Until yesterday morning, she had not been ashore in forty hours (same length of time as during Sandy), due to extremely low tides from high winds blowing water out of the bay. The boat sat well below the dock and for a while was aground so I couldn't pull it closer to the pier; she likely could not have made the straight vertical jump almost three feet anyway. It's not been easy for me getting on and off the boat either; I had to stand on the toe rail and then swing my other leg up to the pier, grab onto the other side of the pier, and pull myself up. Getting back aboard I've often had to sit on the pier to reach the boat. 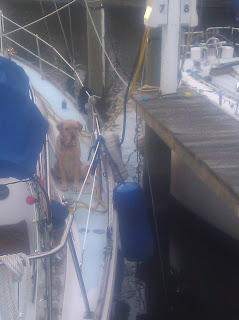 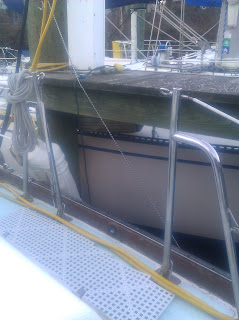 I already lost three mats (one coco-fiber and two carpet) into the water from the high winds; I won't be putting any more mats on the finger pier unless they are nailed or stapled down. While pup was stuck aboard, I bought a rubber-backed carpet door mat for the cockpit and an astroturf one as well, with the hope of teaching her to do her business on the astroturf. If she can learn to do that it will be safer during snow and ice or extremely high or low tides, rather than trying to get her ashore. It will also offer us more cruising flexibility to be able to anchor out and not need to get ashore; though she certainly will still want the chance to stretch her legs, a few days without that is not life-threatening the way a few days of "holding it" would be. I put "piddle pads" down in the boat and tried to convince her to "go" but she just wouldn't do it in front of me. But I knew if she really had to go she would use the pad if I wasn't around. So, while I was off buying the astroturf, she did at least piddle on the pad, and the next morning got a nice long trip ashore. 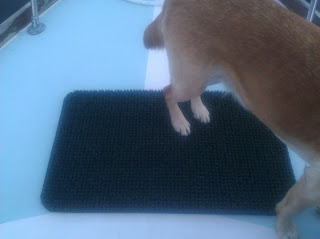 She wasn't willing to use the astroturf before I got her ashore, but when she was peeing on the grass I stuck the mat under her to catch some pee and "infuse" the mat with her scent, so I'll start trying to get her to use it aboard. I've read both success stories and ones of failure at this, but here's to hoping pup dog can adapt to this aspect of life as a boat dog.

I'd had no word from the floppy-haired sailor guy for just shy of two weeks and was quite heartbroken and worried about him. Losing a loved-one is so hard and I wish I could comfort him somehow. I finally got a brief message from him, so at least I know he hasn't gone overboard. There was a time he seemed so crazy about me. I'm probably a fool to hold on, but it's been years since anyone got inside my heart and I'm just not willing to let him go so easily. Studies show that happiness is not tied to money, success, or health. Across cultures the one key factor to happiness is finding that "one" to share life with. 2012 was the worst year of my life, so I am pleased to let it go and I am hopeful this year will finally be full of health and financial security, but most of all full of love.
Posted by Suzy at 10:05 AM