Friday night I was heading over to Port Annapolis marina for a Happy Hour en Español. I was really looking forward to it, and planned ahead to make sangria, which really benefits from marinating overnight. Although I did not have the Gran Marnier I often like to add, or a dash of pineapple juice to toss in the mix, both the red and white sangria turned out quite good nonetheless. For the white I used about 64 ounces of pinot grigio, a shot of Bärenjäger honey liqueur, half a bottle of ginger ale, half a Gala apple, half a Valencia orange, and half a D'Anjou pear. 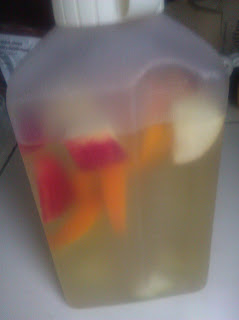 For the red I used a double-bottle of merlot contributed by a fellow happy hour-er, a bottle of ginger ale, half a Gala apple, half a Valencia orange, and half a D'Anjou pear. 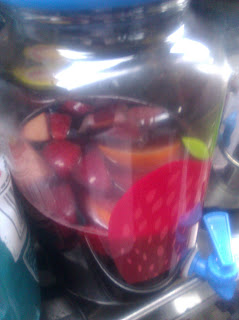 I also made my "not quite refried" beans in the pressure cooker. My first truly scratch item cooked aboard on my propane stove! A half pound of pinto beans soaked overnight, a medium-sized sweet onion quartered, three minced garlic cloves, salt and pepper, a couple tablespoons of olive oil, and three cups of water. 40 minutes under pressure and they were done. I had forgotten my stick blender, which gives them the smooth texture of refried beans, but smashing them in the pot with a wooden spoon worked just fine. I layered the beans with salsa and some nice queso fresco, threw a bag of tortilla chips in my bag, and headed out. As my usual compatriot who drives the dinghy across the creek was under the weather, I planned to drive over by car and stop on the way to let him sample the sangria--he did supply the red wine.


En route to the car the container of red sangria slipped from my grip, crashed to the ground, and shattered. The bathhouse door looked like a crime scene with red wine splashed several feet up and across it. I was stunned and frustrated. I put special effort making it for my friends and had so looked forward to enjoying it with everyone. I stopped by my sick friend's to at least let him try the white sangria but ended up drowning my sorrows in pretty much the entire container of white sangria. I never made it to the party, and had to re-learn the lesson that anything more than two glasses of wine doesn't stay down in my tummy for long. I seem to really struggle with that lesson. How is it that I drank about a pint of bourbon neat one night with the floppy-haired sailor and didn't puke, but even white wine now sets off the little acid pumps in my stomach without mercy? Sigh.

Yesterday may have been the first day in a month that the boat was level with the dock! What a difference to be able to get the dog off the boat a few times with relative ease. The cats have both now decided to be serious escape artists, however. They perch at the top step and leap out as soon as I open the hatch door. Max runs right ashore, but cries out at regular intervals in this odd little Marco-Polo game. I'm glad he does it so I can keep track of him, at least. I assume it means he's unsure and wanting to let me know where he is. Hunter tends to stay aboard, but gets more interested in the water and the dinghy than suits my comfort level. I want them to be able to enjoy the sunshine and fresh air, but will feel much better if they only go out when we're away from shore. They just don't understand the perils of the world--cars, mean dogs, mean people, raccoons, osprey, and more. 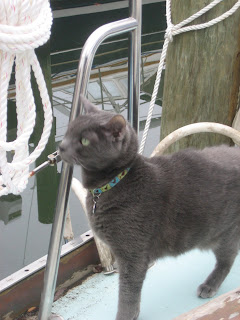 Hunter was rubbing his cheeks on everything to mark the topsides as his territory.

Here are some photos of a foggy evening on Back Creek with the water smooth as glass. 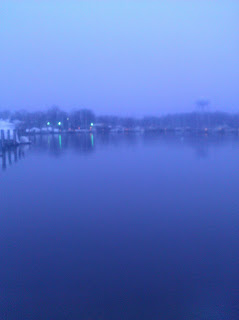 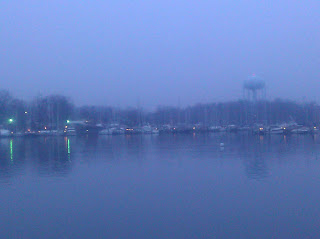