It's been a very tough week but I'm trying to stay afloat--literally, financially, and mentally.

Had expected to get hauled this week and complete various and sundry repairs and upgrades aboard, but most importantly replacing seacocks and servicing/installing bilge pumps. When my helper backed out last minute for a real gig, I was left scrambling. In addition to needing knowledgeable assistance with the projects, I also need to arrange the haul-out and had little luck getting it lined up. Some places winterize their travel lifts, one place I tried only had a crane (not feasible for my boat). The yard I had planned to use literally never answers their phone or returns messages, (same experience when I was looking into slips there), and apparently scheduling me for a haul was a low priority for the guy who could do it once he realized he wasn't going to get anywhere with me. Gratefully, I have found someone to help me with the work; just hoping it doesn't kill my budget. Going to go ahead and schedule the haul-out at a more expensive spot but that will actually be responsive, and perhaps I'll even be able to stay aboard while on the hard, which would simplify things (though pup dog will still have to crash somewhere else). The luxury of an ElectroScan waste treatment unit looks to be a pipe dream for now, just too expensive.


Aside from the repairs being generally necessary, the real heartburn came from discovering that the raw water line previously hooked to the head had been disconnected and left open under the sink and that the seacock for that line is frozen open; if the hose falls below the waterline, the boat can flood and sink. I bought wooden plugs, jammed one in the fitting at the end of the hose, added some duct tape as well, and situated the line so it will stay upward and hopefully above the water line.

Spent seemingly endless hours at the depressing task of applying for jobs. The idea of going back to law is so demoralizing. But most law jobs I cannot get either because I am overqualified, or underqualified, or not admitted in the state they want. I wouldn't even need that many mediation clients to do well and dig myself out of the bottomless pit of student debt--and I actually enjoy helping people through mediation--but the telephone just isn't ringing. I am hoping a newfound potential venture, which would permit me to work from from the boat while cruising, will offer some hope, and ultimately money; but I've been down that road before...getting my hopes up only to end up even more broke than before. I just wish I had real, tangible skills. All those "soft" skills one gets from liberal arts and law school and business school--pretty much worthless.


On top of all my other stresses the cats decided they had it in for me. I have knocked myself out trying to make them comfortable aboard and trying to find a cat litter they are happier with so we can have fewer "out of box" incidents. Apparently they had had it with the Feline Pine and one morning I stepped in a pile of cat shit with my Birkenstocks--a real pain getting it out of the grooves in the sole. When I came back from errands that afternoon, one of the cats had peed on the settee where pup dog and I have been sleeping. At that point I simply melted down. I screamed at them that I have given up so many opportunities, go without medical care so they can go to the vet, live in abject poverty, all so I could keep them and fulfill my commitment to care for them. I swore over and over I never want pets again as long as I live. At least they have been nice to me the past couple of days, but I needed my pack to be kind to me when it's just us against the world.

When the pets finally got their shit in check, it started overflowing elsewhere...backing up into the head, likely meaning the holding tank was full. Didn't quite make it four weeks since the last pump-out. But I'm lucky to have a friend willing to take my boat for a little "cruise" to the pump out station. After having to seriously fend us off pilings and boats when I tried to pull it out of the slip last time, he volunteered for the outbound trip and I could take the return.


Here's what pumping out entails...a giant shit-sucking vacuum; and, yes, that's a lovely observation window in the hose. 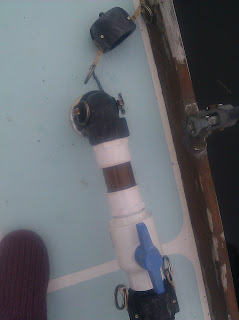 I just took the helm for a little cruise down Back Creek and turned it back over to my friend when we got into the much tighter confines of my marina, but little by little I am getting better at handling my boat. And I'll be back out for the frostbite races tomorrow, so studying as much as I can for the sailing lesson opportunity.

Here's the pup dog at the bow as we headed up the creek, and then me at the helm on the return. 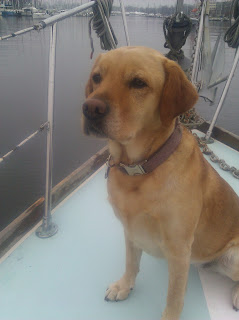 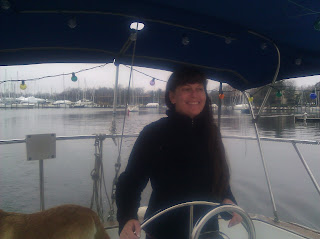 Being left and forgotten hurts. A week ago I sent the floppy-haired sailor guy the most heartfelt, sweet, and romantic letter I've surely ever written. What I've received is radio silence. Though I would get weather reports and photographs, he ignored my occasional messages with questions or updates about my boat projects, and I worried he mistakenly thought that boat knowledge and fix-it skill was what I wanted him for. Just in case, I made clear that was quite far from the case and explained just what I do see and value in him. I'm a low-maintenance gal when it comes to love; I don't need (or want) flowers and chocolates and diamonds; I don't need (or want) constant sappy affirmations of affection. (I'll admit I do want someone to make me soup and cheese bread and play me a beautiful song or two.) And I understand being busy and traveling. But if you care about and miss someone, you need to tell them that every once in awhile, lest they drift away. I guess I need to batten down the hatches to my heart, because I'm just not strong enough to weather the storm of heartache anymore.
Posted by Suzy at 4:25 PM