the tide is high, but I'm holding on

When I looked at the weather forecast yesterday and saw a gale warning in effect I got a bit worried about the winds and potential loss of power. The power did go out--for all of Annapolis--but it was a major transmission line that went down, rather than a weather-related outage. Gratefully, my shorepower came back on after an hour-and-a-half; a longer-term outage during the cold weather would be very problematic for the engine, water tank, holding tank, and the pets. A small generator to run from the dock in case of emergency would be a good idea, but the budget currently has other priorities.

Hardly got any sleep during the night with the boat rocking and rolling in the steady wind and strong gusts. It's not any inability to sleep with the rocking--that is one of the things I most love about sleeping aboard--but when it's really blowing I am in alert-mode trying to monitor all the sounds and movements of the boat to protect her from harm. On one trip out to adjust lines a gust snatched the hatch door out of my hands and tossed it in the cockpit. (Note my West Epoxy job held, though!) I kept hearing squeaking fenders and boat-versus-piling noises, but they appear to be other boats I'm hearing as my lines seem to be keeping me where I need to be in my slip.

I failed to anticipate the extremely high tide, however. Higher than the surge from Sandy. When I took the pup dog above this morning to head ashore we were high above the finger pier and she just gave me a look. "OK, we'll try in a couple hours when it's gone down a bit." Ooops! That was a good four hours before high tide; it was only going to get worse. I have tide clock apps on my phone, but really need a tide clock on the wall so it just becomes ingrained. It can be difficult for me to board and disembark the boat at a particularly high or low tide, but with the dog it can become far too difficult to manage safely.

I adjusted lines, pulled the boat as close to the pier as possible and begged pup dog to go for it. She managed and then I realized how difficult it would be for either of us to get back aboard. I went below and gathered laundry, a change of clothes, a book, and prepared to spend the day ashore until the tide brought the pier and deck closer to equilibrium. Here's a photo right after I jumped the few feet down from the deck to the dock; it doesn't seem like a big deal until you have to do it, arms full of stuff, and only a narrow pier to land on. 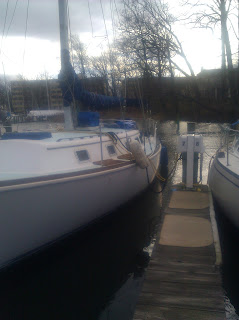 The entire intersection and park in front of Davis' Pub was flooded. 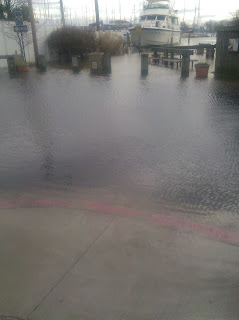 At Davis' I caught up with a guy known to be handy with boat fixes and explained that I'm in rather a jam to get my water pump fixed and need some hired help doing it. I also mentioned that it'd mean a lot to me to be able to cook aboard on Christmas, so if he could help me with setting up the propane for the stove and oven, I would be really happy. Basically, I have a lot of work to do on the boat, but tomorrow I just want to get the very basics: water and fire. Then we can start tackling the rest.

I needed to make an exchange at Target and utterly failed to think through that this is the Friday before Christmas. The traffic disaster in the parking garage, surrounding the shopping center, and within a ten block radius of the Annapolis Mall was ridiculous. So if you saw some crazy girl mumbling and cursing all the people buying cheap plastic crap from China for their kids for Christmas...yeah, that was me.

I usually do love Christmastime; though I hate the shopping and gifts part, I love decorating the tree and singing carols and cooking (oft-non-traditional) holiday feasts. But it doesn't feel like Christmas at all to me this year. I'm not doing any shopping, not sending any cards; honestly, that's a relief. But it's the first Christmas I can't call my father. The last two times I spoke with him were the day before he died and last Christmas Eve. And I'm in love with someone who doesn't celebrate Christmas or me, so the holidays are just a reminder of being alone.


Needed to wait out the tide, so I spent a few hours at my office, doing laundry, locating items for the upcoming trip to Miami and Key West, and baking garlic cheddar biscuits and orange-infused bittersweet break-up brownies. I think I needed the meditation of baking a pizza and kneading the dough. Or the lengthy distraction of baking a cake. But I filled a bag with biscuits that I can re-heat in the microwave aboard and made two dozen brownies, so I can practice some random acts of sweetness during the holidays.

By the time we arrived back at the boat, she was level with the finger pier and I simply had to pull her closer against the wind to get the pup to hop aboard. Once I settled in on the settee the entire pack, dog and two cats, climbed up to snuggle and prepare for another gusty night.
Posted by Suzy at 8:48 PM