The past ten days since my last post have been rather a flurry of activity, though without some of the activity I most hoped to get to. With most things it seems, relying on others is a recipe for disappointment. I guess I need to manage my expectations more conservatively and then find myself happily surprised when something gets done. And just do as much as I possibly can myself, which is always my preference anyway.

Lining up boat labor is a challenge between schedules, weather, finances, and the propensity in Annapolis for many folks to begin drinking early in the day. Scheduling a haul-out to get work done appears to be a pipe-dream until Spring. The yard I thought would be pricier, but more professional, reliable, and accommodating was anything but. I was told that they were too busy hauling boats for the winter and my boat would be "in the way." The girl said she would check about scheduling and call back; naturally that call-back never came. Annapolis is a small town and as soon as I began to share my story of how difficult it is to get scheduled for a haul, (frustrating when I'm trying to spend some money in our local economy, here), several folks immediately knew which girl was a problem and apparently loses a lot of business for that yard (presumably unbeknownst to yard management/ownership). So, on both sides of Back Creek the customer service was sorely lacking and I'll likely take my boat south of Annapolis to get the work done. Although this was very important work I wanted to get done forthwith, a haul is now unlikely to happen until Spring because the temperatures are coming too close to freezing at night and I'm not winterizing systems on the boat--thus, I need the insulation of the warmer water to keep engine, water tank, and holding tank from freezing.


On the upside, I am now docked in my new marina! Happy to have a beautiful view, a bathhouse virtually to myself, and a large grassy yard for pup dog to play ball. The first night was a drama as I elected to dock bow in and that necessitated removal of lifelines so that pup dog could board. The couplers on the lifelines did not want to unscrew and I had to elicit late-night assistance. (Many thanks for always coming through!) It was also the frostiest the decks had gotten, and both pup dog and I had close calls coming down the side deck--not sure if the lifelines would keep us from falling overboard, but they do give me something to steady myself. Here is the frost aboard on our first morning waking in the new marina. 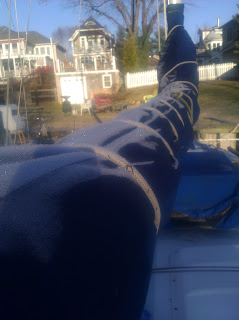 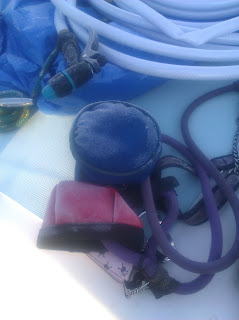 The view at the new marina is so serene... 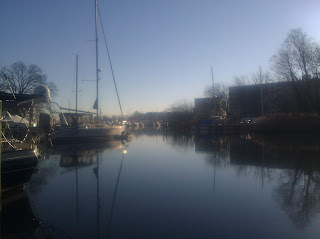 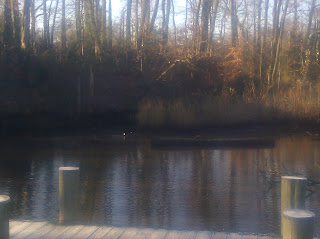 Before I could even get settled into my new slip I had to hop in the car for a road trip to Virginia Beach and Norfolk. Woefully undertrained, I decided to go ahead and take a stab at my 50K trail race, the Seashore Nature Trail 50K put on by the Tidewater Striders. (For those not obsessed with these things, a 50K is 31.07 miles, about 5 miles more than a marathon, though in many trail races the mileage may be more like 34 to 38). Every race is an exercise in managing expectations, but particularly when one is feeling unprepared. Real training was to be four-and-a-half months of intense training, often running a painful 10-miler the day after a 16, 18, or 20 mile run, with a marathon three weeks before the 50K. Training pretty much fell apart as my days were filled with boat shopping and then moving aboard. I think I managed a few 14-milers (sometimes with a 10-miler the next day), a couple of 16s, an 18, and a 20. I was very sick leading up to the NCR Trail Marathon I had hoped to run, and had to pass on it. But in recent weeks I had had some very good runs, having re-found what I love and need from running: my alone time, my meditative time, a space to let my mind wander, work through problems, and try to let go my troubles. With a cut-off time of 8.5 hours, I mostly set my goal as coming in under the deadline, but my primary goal was to finish in around 6.5 hours. The race was well-organized, volunteers were very friendly and encouraging, and the course was quite beautiful. The course wound through woods, bogs, and wetlands, and had us running on packed dirt, leaves, pine needles, wooden footbridges, and sand. I was grateful to have worn my Dirty Girl Gaiters and kept the sand out of my shoes! The Spanish Moss hanging from the trees in various sections of the course was just gorgeous. Some sections of the trails had many tree roots to trip on, often hidden beneath the leaves covering the trail; although I had a few trips and twists, I never fell.


As I began running, just kept going, and then reached the first aid station 5 miles in, I managed to make two important commitments that got me through the race with a time I can be pleased with and feeling that I finished strong, not beaten down. First, I decided I would not walk one inch of the race. I stopped at every aid station, used the porta-potty, stretched, ate PB&Js and potato chips, drank lots of Mountain Dew (a/k/a ultrarunner fuel). But as soon as I left the aid station, I was back to running. I may have shuffled along slowly at times, but I never walked. Second, I decided I would not stop except at aid stations. Stopping and walking often seem like a needed and logical respite for sore legs, but they allow the pain in one's legs to flow up into one's mind and undermine the necessary resolve to keep going. My Achilles tendons were burning, one knee was getting cranky, soles of my feet were begging for squishy insoles. But despite those protestations, I knew deep down, and repeatedly told myself (yes, often mumbling aloud) that "your legs know what to do, just let them go; stop thinking about it and just let them do the work." Distance running surely benefits from training and strong legs, but in the end, it is a mental sport. Until one is there, it is hard to imagine how difficult it is to control one's mind in the face of pain and exhaustion, but that is the true challenge to the sport: the ability to turn off one's mind, let it trust in the auto-pilot, and just let one's legs "go." 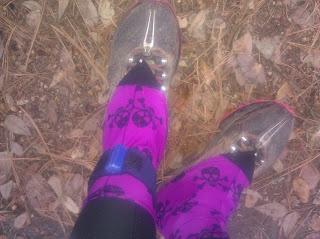 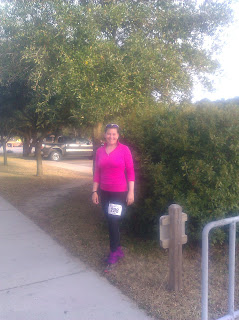 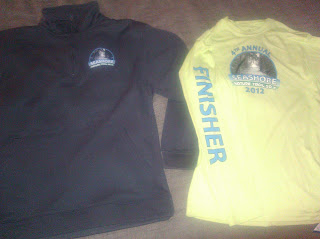 I finished in 6:40:27, sprinting in the last little stretch. An average pace of 12:53 per mile. And while I was, of course, sore the next couple of days, I was already going down the stairs forward (not backward) the day after the race! Undertrained, did not carb-load or hydrate as much as I should have in the days before the race, but a personal record for 50K and feeling good.

Reaffirming to myself that the well of my mental and emotional strength runs deep was especially important as I face the first Christmas since my father's death, still missing him terribly and breaking down just about every day, and as I tend to the heartache of missing my floppy-haired sailor guy and not knowing if he misses me. What I lack in physical strength and mechanical skill, I know I make up for in resilience, empathy, and stick-to-it-tiveness. I'm counting on those qualities to keep my heart going in the ultramarathon of love and life.
Posted by Suzy at 10:32 AM