are you the mermaid?

At a holiday party over the weekend a stranger came up to me and asked "Are you the mermaid?" I was caught a bit off-guard by the question, but realizing the host must have mentioned that I live aboard I responded "Oh, yes, of course I am." Living aboard is a rather substantial life-change and likely seems even more so to those who live ashore, so I guess my having become a mermaid/liveaboard now defines a lot about me, both to others and to myself. By happenstance my long hair was in very mermaid-esque waves; perhaps I've found my Halloween costume for next year.

I told the floppy-haired sailor guy that I wish I were his mermaid, but that the heart wants what it wants. Not having heard from him in ten days I think it's fair to assume he doesn't want this mermaid anymore. I worry he's stuck in a depression over the need to let his ailing and very elderly cat, and best friend, go and I offered all my support in any way he may need, but he doesn't lean on anyone and I was surprised he even shared the details of his crew's illness with me. I know the heart simply wants what it wants and can't be reasoned with. I just wish that after very knowingly, purposefully making me fall in love with him, he'd have been kind and respectful enough to tell me I'd be easily cast aside. On some abstract level I know I deserve to be cherished, yet for the low-low price of a measly text message every day or two as he cruised he'd have had this smart, loyal, beautiful mermaid dutifully waiting for him. There was a time when he actually said he cared about me and even warned me he'd be out of cell and internet range so I wouldn't worry or think he'd forgotten me if I didn't hear from him for a few days. As heartbroken as I am, I do hope the radio silence is just from a lack of caring about me anymore, and not that he's become too sullen to function or fallen overboard.


On the subject of falling overboard, pup dog and I both came perilously close to going into the icy drink this morning. When we went above it was 36 degrees and everything topsides was wet from rain, but not icy. We proceeded up the side deck, I pulled the boat closer to the finger pier, and pup dog jumped off. She immediately went skidding and I was helpless to do anything. The finger pier is but 29 inches wide. There isn't space for her and I to stand side by side and to "pass" her on the pier I have to basically step over and around her. She seemed to get her footing and so I stepped over to the pier, too. It simply looked wet, not even the sparkle of frost, but it was really just the thinnest, invisible sheet of ice. Once there, I could see the grooves in it where pup dog had dug her claws and skidded.

Pup had made it halfway down the pier and stopped. I was taking the tiniest baby steps but it was so slippery I had to stop, too. Pup and I both stood motionless for quite a while. Any time I tried to nudge her to go forward just a bit, she balked and wanted to back up, which risked sending us both overboard. I felt I would not be able to keep my balance and thought perhaps I could crawl on my hands and knees. But as soon as I put a knee down it slid. I threw one leg over the pier and sat with the other beneath me. Pup dog tried to turn around and almost went over the edge. She sat and tried to scoot into my lap. We sat there together; I hugged her and cried. I told her I'm so very sorry I've put her through this horrible experience, that I'm such a terrible mother. I see the look on her sweet face every time I bring her back to the boat; she hates it. I tried to think of someone I could call nearby to bring us salt, but there is no one I would feel I could bother on Christmas morning. I drank my entire cup of morning coffee, wondering whether I should pour it on the pier or whether it would just freeze up worse. Could I make it back to the boat and get cat litter? Maybe. Would pup be able to stay still and calm without me next to her? Unlikely. I recalled seeing an opened bag of salt behind the dinghy rack, but that seven feet to shore might as well have been a marathon.


Pup dog suddenly made a run for it, skidding out along the way, giving me heart palpitations, but made it to shore. I scooted my butt inch by inch along the pier, and when I got to the bulkhead grabbed a cleat and went on my hands and knees to the grass. I didn't have car keys with me to go anywhere or money to buy anything, and had forgotten her leash for a walk. I found the bag of salt, almost all of which had solidified into a few enormous blocks. I brought it to our finger pier and kept digging to the bottom to find loose handfuls and step by step covered the pier as I went. 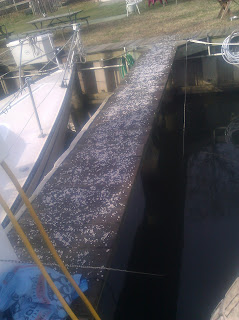 I managed to make it back aboard to grab her leash and give her a good mile+ walk. I worried she'd never agree to go back down that pier to the boat. I kept her on her leash--dangerous because if she fell she'd quickly pull me over, too--but I knew she'd balk without it. Her hind legs still skidded as she pushed off to jump aboard and then I had to convince her to wait for me, since we were still connected by a short four-foot leash. She balked about going down the side deck and slipped on it just before the cockpit. I told her she's so brave, that I'm so proud of her, that I'm so sorry I've put her through this. She's scared to jump down into the cockpit, but I think it will become mission critical for her to learn to do so and learn to do her business there. That could save our lives on an icy morning when she needs to relieve herself.


Now she's sleeping peacefully at my feet on the settee. Hopefully she'll forgive me, survive the winter aboard, and learn to enjoy the boat when we have warm summertime and can cruise and swim, and maybe our real life will begin.

Solar light update: here's a photo of one of the solar lights I bought on Amazon. They are really quite bright. I think I will take down all the holiday lights I strung around the bimini and just rely on the two solar lights. One is hung on the aft rail (pictured) and the other looped around the end of the boom. 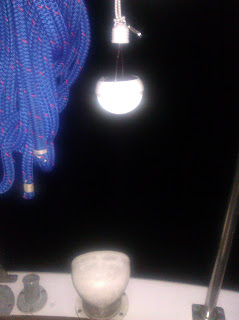 The guy I'm hiring to help me with boat fixes and teach me along the way was too hungover yesterday to help me with the water pump and propane. I put my dirty dishes in a bucket and carried them ashore to wash in the bathroom sink. I bought deli cheese and meat and a loaf of bread to make sandwiches and a grabbed a few other items I can just microwave. Every surface in the boat is a cluttered mess, so it won't hurt for me to take a couple of days to clean and organize, and I would really like to move back into the spacious v-berth rather than being cramped on the settee, which doesn't really fit me and the dog. I'm too tenderhearted to make the poor pup sleep on the floor.

Well, time to see if I can rally myself to have a bite to eat and go for an afternoon run. I surely need the endorphins to pick me up. I'll be relieved to get past the holidays. Hopefully next year I can anchor out away from civilization from mid-November until mid-January and miss the whole affair.
Posted by Suzy at 2:18 PM