When I bought the boat the door was actually broken into two pieces. Gluing them together was my first little epoxy project. Although it isn't pretty, that repair has held fast despite the door being blown out of my hands and thrown across the cockpit a few times by high winds. However, after over a year I still hadn't gotten around to hanging the door back on its hinges. Most sailboats seem to have drop boards, but mine has a hinged door which I mostly treat like a big drop board. No one else can ever get it seated quite right, and if I rent the boat out to go have an adventure, I think the door ought to be properly installed. 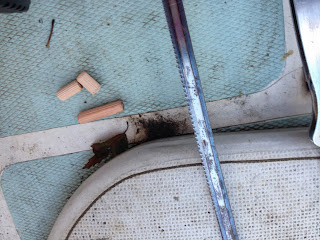 What's the problem? The holes for the hinge screws had been worn out and someone else's prior attempts to fill and re-drill were beyond their useful life. The plan has been to drill holes quite a bit larger than the hinge screw diameter, then fill them with epoxy and wooden plugs. I bought 3/8" plugs which are 1 1/2" long. I wanted enough new wood for the screws to bite, but didn't want to drill all the way through the door. I used a hack saw to cut the plugs in half. Thirds probably would have been just right, but tough to do with a hack saw and hindsight is 20/20.

Above are photos of the upper and lower holes before and then the upper one part-way through the process. I used three different drill bits, working my way up to 3/8" as I drilled out the old holes. This was my first time using my new Dewalt cordless drill that was a gift from my Amazon wish list from a very supportive reader and friend. There are a lot of drills out there to choose from, but I really like this one because when I had used a similar one it was smaller than most drills and so a better fit for my smaller hands and for fitting into tight spaces aboard. A big, heavy drill may be fine for quick projects, but for jobs like removing the old boat name, that took several hours a day for several days, having a smaller, lighter-weight drill made a big difference in comfort for my arm. I bought a titanium bit set, so I should be able to drill through anything but concrete!

I have some standard West System epoxy kits--small batch sets of resin and hardener--but had already opened some West System G/Flex when trying to patch the dinghy, so figured I should use up the G/Flex. It mixes in a simple 1:1 ratio. I used the empty yogurt cup from breakfast for a mixing bowl. I put a dollop of epoxy into each hole and then used a wooden hammer for cracking crabs to hammer in the plugs.

I still had a lot of G/Flex I could use and--always looking for a way to put off my 16-mile training run--decided to tackle the dry-rotted threshold that I dug out last Thanksgiving and had planned to seal with Git Rot. The gaping hole had simply been covered with blue painter's tape all this time, but once I had dug out that dry rot and taped it over, the leaks onto the nav station and galley counter during rain storms had stopped. I poured a bunch of epoxy into the threshold and then decided it really needed to be thicker. I added thickening powder to get a more peanut-butter-like consistency. There was a through-and-through at the starboard side of the threshold, so I smushed as much epoxy that way as I could and then cut a couple small pieces of fiberglass cloth and painted epoxy over them to create a patch.

When I stuck my head back inside the boat I noticed big globs of epoxy were dripping from the threshold and onto my printer at the nav station. Oopsy! If the rain had been getting in that way, I guess the epoxy would too. Wish I had thickened it up more from the outset. I cut a couple more pieces of fiberglass cloth and used them to create patches along the leaking seams. Once the epoxy began to set, the dripping subsided and the patches sealed up.

I didn't realize that the hardened epoxy drips would be razor sharp. I sliced the back of my hand when reaching below the threshold to flip breakers on the electrical panel. I'll go back over them with a file and sandpaper to smooth them out. The repairs may not look pretty, but if they buy me a few years before having to replace the entire door and frame, I'll be thrilled.

I'll want to fill the rest of the hole at the threshold with something. I'm still thinking about whether that will be more epoxy or some other sealant. Of course, it would be nice to cut a piece of wood to fit into the space and not just have some random hole there. But for now, function is more important than form.

Function and fun simply outweigh form and formality. It will likely always be that way in my world. I've never been much of a housekeeper and doubt that's going to change any time soon. But my bar tends to be well-stocked and good eats are a-plenty in my galley. I think good food, drink, and conversation far outweigh fancy cushions and spotless varnish.

Just be careful when you reach to flip the breakers.