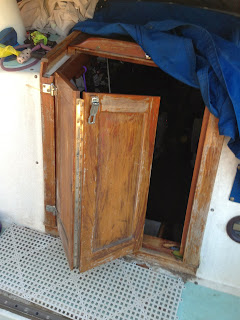 Having an actual working door feels like such a luxury. I keep trying to grab it and pull it out like when I was using it like a dropboard. We're getting fancy-schmancy over here now.

Having given the plugs a few days to set in the epoxy, yesterday I roped my friend Mike into helping hang the door on its hinges. The first step was sawing off the protruding portions of the wood plugs. Once I did that, Mike then sanded them smooth. I set the hinges in place and we jiggled them around, discussing the best angle. We held the hinges where we wanted and I marked the door where I would drill the pilot holes. The new holes are pretty far from where the old ones were, which makes me wonder if poor placement of the screws before put unnecessary pressure on the wood and that is why those screw holes didn't work out.

I'd love to get all that old Cetol off the door and frame, but since I didn't do that before the big epoxy patch job last fall, there will always be Cetol trapped under that epoxy. I'll probably just leave it alone for now. Down the line, it would be nice to sand all that Cetol off and either teak oil the door or paint it. Maybe I could get someone to paint a nautical mural on it... hmmm... we'll see. For now, I'm just enjoying the luxury of a door that opens and closes and isn't going to blow away.

We were feeling sporty and I had just borrowed a heat gun from a fellow liveaboard. I've never used a heat gun so Mike suggested he show me how to use it and how crazy hot it gets. The project: removing the old non-skid glued to the companionway steps. It is hard and the dog doesn't like to step on it. My plan is to make braided rope mats that I will tie or nail to the steps. The varnished steps are slippery if left uncovered, so the rope mats will function as non-skid, but softer on paws and bare feet and--fingers crossed--will be prettier, too.

The heat loosened the glue very quickly and the non-skid peeled right off. What remained were these big patches of rubber cement. I rolled it off and very little residue is left behind. A little dish soap and a gentle scrub with a Dobie pad should clean it right up. We also learned that the smoke detector works: the fumes from the glue kept setting off the alarm, which both beeps and says "Fire! Fire! Fire!" Now the pressure is on for me to make some Marlinspike Sailor-style rope mats and see if the dog will finally tackle the steps on her own.

Winter aboard has definitely arrived. The cats are cuddling together to stay warm. I slept with a heating pad under my back since the v-berth is the coldest spot aboard. When I took the dog out this morning it was only 36 degrees and there was frost on the marina lawn. Fingers crossed the tides are high enough to get in and out of the slip on Sunday for a crisp fall day sail.
Posted by Suzy at 9:43 AM