Everything seems to be a moving target, constantly shifting, leaving me in flux. I am ready to move on, move forward, have an adventure, find balance in the midst of the turbulence. But so many things seem to keep holding me back as I try to break free.

I have been trying to get moved out of my office since I can ill afford the expense of it, haven't had any clients in months, and detest driving across town to go there. Friends would help me move but they are only free on the weekends, when of course I have to work. I had hoped to sell more items to have some spare cash to go without work a month or two while sailing away. The garage sales were exhausting and while I am happy that many items are off to new homes, so much remains requiring sorting, decisions, and disposal. When I ready myself to spend a day tossing, lugging, moving... I get downpours. Items I am trying to sell or donate will be ruined if I move them in an open pick-up in the rain. So I must regroup, reschedule. The volume of stuff I set aside to save will fill the boat to the brim, so I may be living among stacks of books and random clutter for a while...not that I don't already! The stress of moving, which I had hoped to never do again, is wearing me down. I try to remind myself of the relief I will feel when I am done with that office for good. 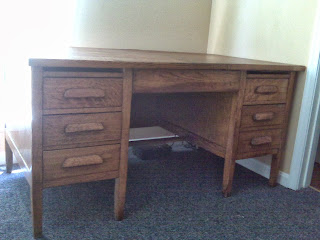 Yesterday a friend met me at the office to load some larger items into the truck so that I could donate them to Goodwill. I was sad to see the nice large desk and little dresser go, but glad at least they would help someone else. Unfortunately, Goodwill refused to take the desk, though it's not clear why since it was a nice solid piece, antique, probably oak, quality made unlike the junk that gets churned out today. They were going to take the dresser but then realized one foot had popped off. Its screws were intact and the foot just needed a touch of glue, but I hadn't had time to do it since it would need to set. But instead of just saying they couldn't take it, they berated me and gave me a ridiculous rash of shit, going on and on until I drove away. An older woman was there dropping off clothes or something and chastised them for being so mean to me about it and failing to appreciate the dovetailing and craftsmanship in the little dresser. At least she saw some beauty in that poor little dresser before its demise. The downpours began overnight with the desk in the back of the pick-up and so now the desk, too, is ruined and I won't even be able to find someone who might adopt it. Probably needless to say, but hell will freeze over before I do any business whatsoever with Goodwill. There are many, many more worthy charities out there. My collection of original artwork will be too difficult to sell, so I will donate it to the Anne Arundel SPCA for silent auctions or to brighten their walls, (and they said they certainly want the set of connecting dog gates that Goodwill refused). Any clothes and shoes I can't consign and various housewares items and books will likely go to the Lutheran Mission Society.

A little over a week ago I began seriously looking into joining a boat as crew for a major passage...from Southern California to Hawaii and on to the Marshall Islands. Although the trip would come right in the midst of when I was planning my own voyage, the opportunity to undertake a lengthy passage and see the south pacific was worth delaying my own plans for several months or another season. I began turning my life upside down. Planning for how I could cover expenses while gone with no income, planning for how my pets would be taken care of. Immense inconveniences all around and guilt over leaving, and likely separating, my pets. I had found someone possibly willing to rent my boat with the cats aboard, which would make the trip financially feasible so that slip fees would be paid in my absence and the cats would not be uprooted. A friend offered to take in pup dog and even bring her by to visit the cats so the pack would not feel so disconnected.

While constantly stressing about the financial, logistical, and pet care issues, I was simultaneously exhilarated at the prospect of the passage. Two, perhaps three, months at sea with one stop along the way. That is a lot of time to be seasick, face terrifying swells and winds, be in tight quarters with strangers, manage crazy sleep and watch schedules, and be generally out of contact with the world. But it is also a lot of time to learn, to find balance, to challenge oneself, to find one's breaking point, to see the stars and sea all around. Most friends encouraged me to find a way to make it happen, to seize the opportunity and go have an amazing adventure. I tried to focus on the upsides, so much opportunity to learn both about sailing and about myself, getting to snorkel in Hawaii and the Marshalls, living life simply, out of one duffel bag.

But my questions about the passage, e.g. how the boat is outfitted, what gear and safety equipment are aboard, have gone unanswered. I had said that it was something that would either come together or fall apart within the next few days. The time when I can secure an affordable plane ticket to LA will soon pass. The lead time needed to deal with any vaccinations and passport issues is fast closing. And so the exhilaration has turned to disappointment and I am coming to accept that this amazing trip simply won't come to pass.

Nothing ties me here anymore. My current job is more work for less money and not covering my bills, but certainly adding to my headaches. Having a job one simply dreads going in to is such an awful feeling. I have friends here, but I trust the close ones will come visit me along my journeys and will be here for a pint at the pub upon my return. And of course there is no love interest in the picture. So a marathon in November and an ultra in December are all that really tie me here now. I've paid for the races but it seems silly to stay just for that. Well, my slip lease runs to year-end, so that ties me here unless released from it, since I can't afford to pay for the slip once I'm under way. I worry that I won't be able to pull it all together, finish repairs and such, in the next three weeks. I would head out later, in the cold of January, but worry about nor'easters making it a tough trip. So, the plan is to go. It's not clear when. It's not clear where. The plan is that there is no plan. I just want to live my life barefoot, in a bikini, snorkeling in crystal blue waters, digging my toes in hot sand. On this gray, rainy day, that dream feels so far away and everything remains in flux.
Posted by Suzy at 5:19 PM