Friday held a few "firsts" of the season. First time this fall for donning my Uggs, wearing gloves, and turning on the oil-filled radiator space heater aboard. Pup dog had curled up in a tight ball on the settee and gave me a plaintive stare with those big brown eyes. "Okay, fine. I admit it's cold in here; I'll put on the heat!" It was 60 degrees inside the boat and only about 45 outside. And that wasn't even the overnight low. The heater brought it up to a cozy 65 or so. As friends can attest, I keep the boat a pretty chilly 55 to 65 degrees. Since I have metered electric, I am cost conscious and opt to bundle up inside rather than face enormous electric bills. The space heater is also running off the main shore power line, so it takes about half the total amperage I can run on that line at once. Running it on high around the clock may trip a breaker, (or much, much worse fry the shore power cord and lead to a boat fire), so I try to run it at a lower heat setting and not use it 24/7 if I can avoid it. I know "winter" technically doesn't start until after mid-December, but to me "winter aboard" begins when one needs to turn the heat on. Friday I also hailed the pump out boat and was told the boat would be out of service for the next five days or so for repairs and maintenance. I sure hope that's all it is and they aren't taking the boat offline this early like they did last year. Fingers crossed the harbormaster keeps the boat running at least weekly through the winter. Further proof that winter aboard is here: condensation on the window frames this morning. Let the winter battle against mold begin. 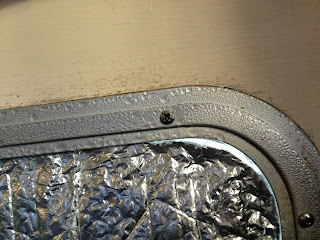 The next tidbit isn't even worth mentioning, so I only do so as a little post-script to one storyline for those who have followed along from the outset of this journey. Friday I was walking along over the Spa Creek bridge engaged in two different sets of private messages and typing away furiously. (Yes, I know, texting and walking is bad...but I was messaging about important boat stuff if that makes it any better.) I glanced up so as not to walk into either vehicular or pedestrian traffic and briefly saw the floppy-haired sailor guy about to pass me. "Hmm. It's [him]." And I simply went along walking across the bridge, engaged in my correspondence, and otherwise went about my business. No reason to acknowledge him. He simply isn't on my radar. I have so many things on my plate, so many stressors, and so many wonderful people lifting me up and supporting me. To me, he just isn't there at all; just a blank. And that's just fine. I am not going to feign friendliness or friendship with him, and I also don't see any point in giving him a lecture or telling him off. He doesn't deserve any effort from me positive or negative, I'm just too busy keeping my life moving forward.

Friday I also heard from the captain who asked me to crew from Los Angeles to the Marshall Islands. I had mostly written off seeing that trip happen since I hadn't heard back from him. He'd been out of touch due to a family emergency. I had been so excited about the passage and disappointed to set that plan aside. I still think it's an amazing opportunity to develop my sailing skills and confidence and to see parts of the world I wouldn't take my boat as long as I have pets aboard. He's now targeting a late November crossing so I'm cautiously optimistic that the stars will align and I will be able to go have an amazing adventure this winter. Whether it is smooth sailing or a terrifying ordeal, I think there's no doubt I would learn a lot about sailing and about myself so it's an opportunity I need to seize.

The two other liveaboard boats who have been my neighbors the past few weeks have now headed south for the winter. Brilliant cast off on Friday afternoon. They gave me an old halyard that I'll repurpose--perhaps I'll finally make rope mats for the companionway steps--and a 2.5 gallon jerry can for gas, which will be a handy back-up for the dinghy. This morning we waved good-bye to Eleanor Q. Buttercup will be sad to see them go. Frank would toss the ball for her regularly and they brought her an enormous bone from a T-bone steak last night. You can follow their adventures here. Unfortunately, within only a few hours of their departure a different boat I had hoped not to be neighbors with again returned to the slip next to me. Sigh. Another reason to never, ever sign an annual slip lease: ultra-annoying dockmates.