some days you're the bug

Saturday before last I hopped in the car and something seemed amiss. Then I noticed the rear view mirror just dangling by a cord. At first I thought perhaps someone had ransacked the car, but apparently the adhesive holding it to the glass simply failed, likely due to the heat. Not quite sure what to do until I have the time and money to deal with a repair, and not having any duct tape with me at the moment, I jury-rigged a nest for the mirror on the visors and their pull-out extensions. This interim solution works surprisingly well. 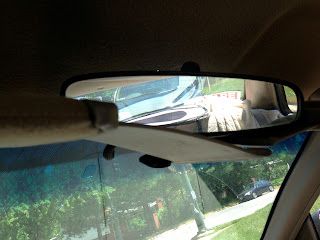 Then last Monday my car got impaled on a bike rack when the guy two cars ahead of me stopped suddenly and my brakes couldn't quite stop in time in all the rain.

The damage estimate was a lot higher than I expected (and the bike rack didn't have so much as a scratch). The car is nothing fancy so the appearance doesn't really matter to me, but I have some other repairs that have to be made and I'm concerned about the hood not opening and closing properly now (I haven't risked trying to open it yet). I'm still mulling over my options.

Tropical Storm Andrea was a non-event for the most part but did bring steady and sometimes heavy rain for a couple of days.  The clicker for the car got wet in the rain and had a nervous breakdown, leaving me unable to lock and unlock the car until I opened the clicker and dried out the components.  (Since I bought the car used I do not have a full set of keys and the ignition key I have does not work in the doors or trunk.) I'm starting to feel the car might have it in for me.

The rain from Andrea also almost sank the dinghy. The water was so high I thought the oars would float away soon and the dink would sink. The bailer is tied to the dinghy, so I tried to get in to reach the bailer, but as soon as I added my weight to the dink water began rushing over the stern. I grabbed the swim ladder and scrambled back on deck. I tied a line to a bucket and lifted and dumped bucket after bucket of water until the level had gone down enough that I could get in the dinghy to finish bailing without sinking.
Posted by Suzy at 2:54 PM