My latest boat project was the removal of the old boat name, "Christal Star." I regularly joked that it sounded like a stripper name, especially since the hailing port was in Texas and the lettering was el cheapo vinyl stickers from a hardware store. Just not as elegant as I think my vessel deserves. And, of course, naming the boat gives me a feeling that she really is mine. Yes, the new name arguably also might sound like a stripper, but it's classic and universal. And, no, I'm not going to tell you what it is yet because I'm superstitious.

The lettering was fairly old, and chipped and cracked in places. Although many people use a heat gun to loosen the adhesive and then hand-scrape the lettering off, I wasn't thrilled about being in a tippy dinghy in the water holding a heat gun plugged into an extension cord. I also wanted to avoid nicking the gelcoat with a scraper. Below is a photograph of the small amount that I hand-scraped. 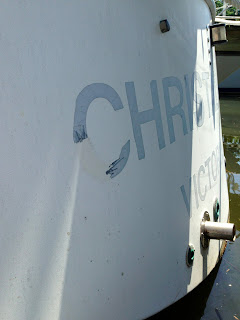 My friends on S/V Octopussy recommended an adhesive eraser wheel drill attachment from 3M. I had looked in vain for one at hardware and marine supply stores, until they explained you get it at any auto supply shop. I had been expecting a sander or similar, but it is a rubber wheel used by body shops to remove striping and the like. I guess the rubber grabs onto the vinyl and pulls it off. At first it didn't seem to do anything. I emailed Bond and Octopussy somewhat frantic asking if I'd bought the right thing or what I was doing wrong. Bond calmly talked me off the ledge and assured me it would work, though it would take some elbow grease and to expect sore arms. I also watched a couple of YouTube videos of guys using the wheel so I had a better sense of how it worked. 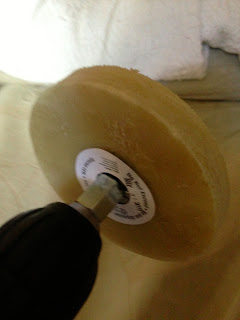 I think the hardest part of the project was all the preparation. Getting the dinghy behind the boat, (but without pulling the boat so far forward that the dog ramp wouldn't reach), loading gear into a dry bag to take on the dinghy, climbing in and out of the dink when it sits pretty far below the boat's deck. I spent an hour and a half on Tuesday before the drill's battery wore down. On Wednesday I used the first drill (recharged) but also had a second one ready with two battery packs, so when the first drill died, I swapped out for the second one so I could finish the job. It takes some trial and error to find the right angle and speed for the wheel to most effectively grab the old stickers and chew them off, but once you find that sweet spot the work moves pretty quickly. What slowed me down most was that because the drill doesn't have cruise control my trigger finger and thumb would get sore from gripping the drill. It's also best as a two-handed operation for stability and pressure, but that means my back and legs were working hard to provide stability aboard the very tippy hard dinghy I used as a work float.

Here is a photo with "Star" removed and below is one after all the lettering came off. You can see the shadowing that results from UV rays fading the non-lettered portion of the transom. After using the wheel, I applied Goo Gone to the lettered areas to remove any remaining residue and then washed the transom, giving it a good scrub. 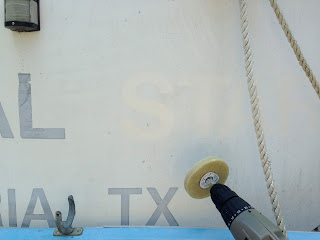 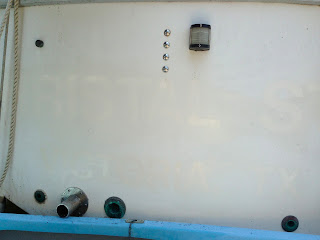 After I finished removing the name, a friend came that evening and used polishing compound to buff out most of the shadowing. 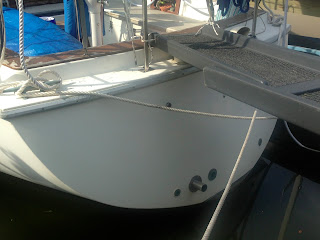 With the old name removed, and plans for the new name to be applied this weekend, I threw together the de-naming ceremony on the fly. A handful of friends came out and the expected thunderstorms held off for the duration of the evening.

Buttercup thinks of M and Q from S/V Octopussy as her dog-harem, so she was pleased they came along for the festivities. My cat Maximus, however, was not as interested in meeting M as M was in meeting him. Max found himself blocked onto a finger pier with a big dog between him and the dock. Max hopped onto the nearest boat and then made a harried leap for our boat. I think Max may have been looking over his shoulder as he leapt, and for once his footing was not sure. Into the drink he went. Almost 9 months aboard before our first Cat Overboard Incident. I didn't see it happen but heard the collective "oooh" of the crowd. I jumped aboard and grabbed the fish net set aside for this very occasion. I saw swirling in the water but couldn't spot him. Folks ashore called out to Max and apparently he swam toward their voices, found a 4" x 4" beam along the bulkhead, and climbed out. I spotted him on the beam beside a piling, with no where to go. He stood dripping and bedraggled, crying out for his mom. I quickly scurried over the railing and into the dink beside him. It's a good thing I've got good balance and had been practicing that same climb in and out for the past couple of days. When I grabbed Max he wrapped his claws around the edge of the dinghy and didn't want to let go. I had to pry his little claws off and clutch him to my chest. I carefully stood up and released him on the finger pier. He ran down the pier and hopped aboard, still in shock over the impromptu swim. 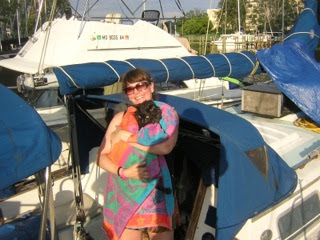 So the festivities were off to a dramatic start! We all hung around with beer, wine, and nibbles, and when I saw the sun was soon going to set, I asked a couple of the guys to head out off the bow in their dinghies to photograph the ceremony from the water. A group of guys was hanging out in the cockpit of the adjacent sailboat and when they saw me walk to the bow with a bottle of Veuve-Clicquot they exclaimed "You're not using that good stuff are you?" Yes, indeed, I told them, laughing. Half the bottle over the bow and into the water. I'm not cheaping out on Poseidon and tempting fate! I popped the cork and encouraged everyone to come aboard to hear the incantation. I asked Poseidon to remove the name Christal Star from his ledger of ships, threw an ingot bearing her name into the sea, (a quarter with the name written in dry erase marker), and poured half the bottle of champagne on the bow and into the water from East to West. We all took a swig straight from the bottle and then headed ashore for more celebration with cava, beer, and wine. 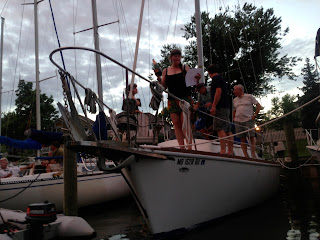 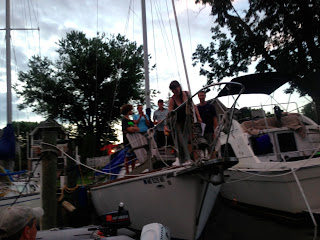 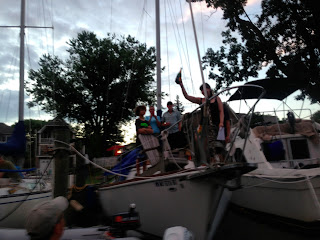 The de-naming ceremony went well and early this morning the new name went on, nine months to the day after I bought her she is re-born with a new name. The lettering came out beautifully and it will be a wonderful birthday present for me to formally re-name her on Sunday.
Posted by Suzy at 3:41 PM