a chill in the air (and some pet peeves redux)

We had a few mild, pleasant days over the holiday weekend, but the heat kicked right back in. The boat was back to 85 to 90 degrees inside the past few days and yesterday topped 95. I'm running an oscillating fan and I've had the forward hatch open plus port lights open along the sides of the boat to get some cross ventilation. Worried about rain coming through the port lights, I draped a tarp from the cabin top to the life lines, secured with bungee cords, to keep any rain from coming through the starboard port lights and put a towel down to catch any rain coming in on the port side. 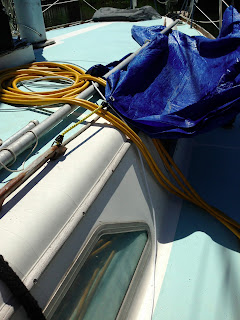 I was planning to head out first thing Thursday morning to buy a portable room air conditioner despite the painful $300 price tag. It would take up space in the cabin and need its vent hose run to a port light, but setting it up would be something simple enough for me to handle. My friends on S/V Octopussy urged me to let them take a look at my old air conditioning unit before spending money on a new one, so I held off. Yesterday evening, we disassembled and inspected, not finding any obvious failure right off. But it turned out the problem was an incredibly simple one: the unit was overheating because I had kept the cover on. The cover is made from the same blue fabric as my bimini and dodger, but has mesh panels in the sides and back to allow the unit to vent. I had put the cover on for the winter and had not had any problem running the heater with the cover on. But when I was running the heater it was below freezing, so the unit was not likely to overheat. We removed the cover and instead of tripping the breaker after ten or twenty minutes, the unit just kept happily humming along. Within a couple of hours the temperature inside the boat dropped from about 97 degrees to 70. I feel pretty silly that it was such a simple solution that I should have been able to figure out myself. But I'm grateful for good friends, cold beer, and the opportunity to look at the guts of the unit so I won't be as nervous troubleshooting it next time.

Here are some photos of my lovely rooftop RV air conditioner. It may not be pretty, but it works. 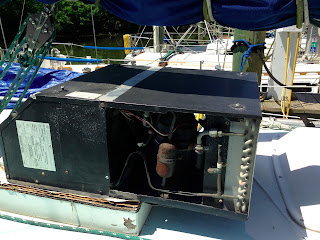 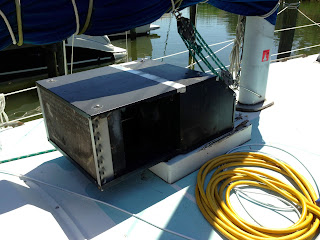 Before getting the air conditioning back online, I did a few "loads" (read: buckets on the deck with a hose) of laundry and gave the boat her first wash of the season. I think it will take a couple more washes and a lot of elbow grease to get her really sparkly clean, but she definitely looks better. When I started washing the decks there were no bird droppings on her at all. Within a minute of finishing, a bird had shit on the deck. Seriously? But I cleaned up the cockpit and removed the various non-matching door mats scattered around for the dog to have traction because she hates walking on the non-skid. In their place I put down the cockpit cushions I inherited from my friends at Life Afloat Archives and pulled out my striped cushions that happen to match my robin's egg blue decks perfectly. Once I get the propane tank mounted off the rail (meeting with my handyman this weekend to get the job started), I can remove the blue tarp-monster and the cockpit will be back to seating several people comfortably for entertaining. 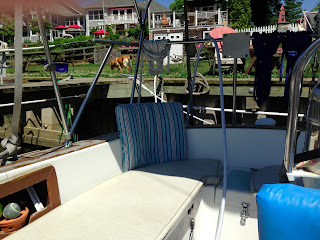 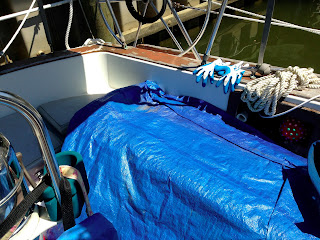 A few minutes ago I headed topsides to take the photos included in this post. I had heard some people in the marina, which is uncommon at this hour on a weekday since I'm the only liveaboard. I saw a powerboat and dink in the slip recently vacated by my neighbors. The guy was getting out of the dink and when we said hello he asked if I live aboard. I said yes, and he mentioned he lives across the creek and what type of boat he's on. I'm sure it sounded really weird, but I blurted out "Are you [so-and-so]?" He looked at me askance and said, "Yes." "I'm RunningRabbit!" I proclaimed, "I replied to one of your posts asking for marina information in Annapolis." Yes, from the type of boat he lives on and the hat he was wearing, I was able to correctly identify this guy I've never met but have briefly encountered on the boating forums.  It's a very, very small world we live in indeed.


I just have to revisit my earlier "pet peeves" post here for a bit. I don't think I'm overly touchy (i.e., sensitive) but I do think others are overly touchy (i.e., hands-y). After my earlier post, another guy at the pub was touching the faded tattoo on my arm, even as I kept sort of stepping back to avoid it. Then a guy at another bar kept mussing my bangs and hair, which I had meticulously flat-ironed straight. If I'd have been alone I'd probably have dumped my beer on him, but my friend seemed mildly amused by him so I tried to tolerate it. Then at work a guy was poking my side in a tickling-like gesture and later grabbed my phone out of my pocket (as I was reaching for it to pause the podcast I was listening to). At that point I actually did melt down and yell for everyone to stop fucking touching me. Maybe I'm being overly sensitive. I mean it's obvious that in having a great ass I am inviting every brother at a reggae show to grind his junk on me, right? Uh, no! Guys, if a girl wants you to touch her, she will make it very, very clear. Otherwise, keep your hands to yourself. I don't even pet a stranger's dog without first asking for permission. It's called basic etiquette. I also don't just "drop by" my friends' houses (or boats) unannounced. Before 3PM the likelihood I'm still in my jammies is about 95%. I guess I just value my privacy a lot more than most. Fences really do make good neighbors for a reason. At least I've got this huge attack cat to protect me. 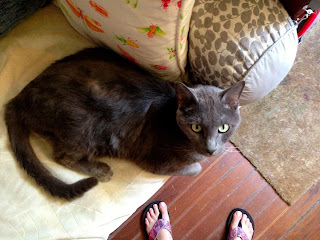