Last week I got to spend a day on the Bay during Rockfish "trophy" season. Other than a couple of forced fishing excursions during childhood, I've never really been fishing, perhaps mostly because I'm allergic to seafood. So, it might be strange that I'd drag myself out of bed at 4:30AM for a fishing trip.  Stranger still might be that I didn't actually know the guys I was heading out fishing with.

The invitation came from a friend from Cruisers' Forum, someone who has followed my adventure aboard possibly from before I had even bought the boat. He and his wife have a first mutt about the same size as Buttercup, so he's shared some dogs-aboard tips. We've swapped marina information, and he's answered repair questions and offered loaner tools. So, although we hadn't ever met in person, he was one of my friends I just hadn't met yet.

But even if I'm not into fish and fishing, a day on the water is always good and I knew it would be a good treat for Buttercup, who deserves plenty of spoiling with how busy I've been lately. So I dragged myself out of bed and promised the sleepy-eyed puppy she was in for a big adventure. She needed some help getting aboard and getting up the stairs to the flybridge, but then spent the day right at the feet of whoever was manning the helm...or whoever was eating something she thought she might catch crumbs of.

I got to learn how the planer boards are put out and assisted with putting out the many lines for trolling. At the helm I learned I needed to give plenty of space when passing other boats, since we had planer boards out and so did most of the other boats out on the Bay with us. It was useful to compare my sighting of a marker with my actual steering as revealed by the chartplotter. Eventually I'll get a better sense of the delayed-reaction in steering a boat and not overcompensate so much.

When the first line when down I hustled down to the deck to help. Little did I know I would be handed the rod and told I had to bring it in. I bellyached about my torn rotator cuff and it was no easy task cranking the reel, but I managed to reel in our only fish of the day, a 37" Rockfish. I am not a vegetarian, but I probably should be. I'm not a hunter, not used to killing things, and don't take pleasure in hurting living things. When the fish came out of the water and was about to go in the net I looked at it and said "I'm sorry I killed you." 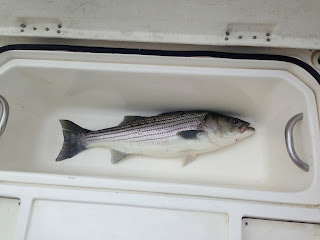 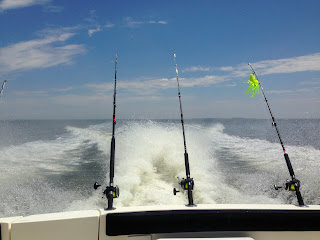 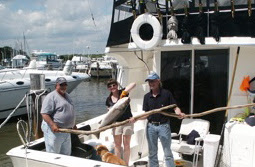 Although we had over a dozen trolling lines out, our only other catch was a 14' tree branch that was a bear for the guys to bring in. Buttercup kept trying to grab the fish by the tail when I had to hold it up for the photo.

As I drove back home I glanced at the back seat and saw Buttercup deep asleep. A tired puppy is a good puppy. So glad to give her a good day on the water.
Posted by Suzy at 11:00 PM