It has been longer than usual between posts for me, but owing only to how busy I've been now that the warm weather has arrived and the endless list of boat projects has emerged from winter hibernation.

Before I get into the saga of replacing the vent hoses on the holding tank, I have to share a couple of snaps of this groovy grocery bag I picked up for 99 cents at Trader Joe's. It has liveaboard written all over it... 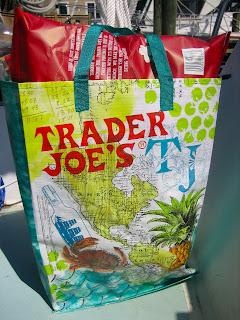 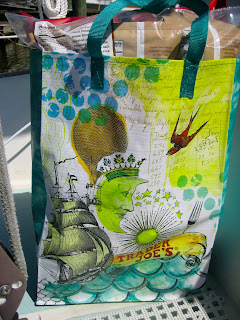 So, we left off at my six-month-aboard anniversary and the old vent hose on the holding tank had thumbed its nose at my attempts to remove it. A good friend volunteered to help me with the project this past Sunday despite my admonishments that it was a tough, smelly task. When we had beaten the job into submission, he wouldn't even let me pick up the tab at Davis'. I'm sure blessed with some great friends!

One of the initial challenges was that I needed better access to the tank fittings, as I had been working only through a small access port. To gain access above the tank we needed to remove the v-berth mattress, which in my boat is one enormous foam mattress (in some boats, the v-berth takes two or three cushions assembled together). The mattress was also it's own "project" that day. Months ago the cats had peed on the mattress before I had managed to cut a protector to fit it, and my treatments with Nature's Miracle had not been thorough enough, so there was occasionally a residual cat pee odor--not pleasant. The winter condensation also meant that mold had returned in the forepeak. Thus, the mattress was it's own icky, smelly project. I would love to get a new mattress, especially as this one is not friendly on my back, but at $2500 and up... the boat repair and outfitting fund can't swing that yet.


The mattress is heavy and unwieldy. Removing it was not an easy job even for the two of us. But we pulled it out, carried it up the side deck, and laid it out on the foredeck in a way that maximized air circulation around it. The sheets had gotten wet and moldy along one side, but the mattress itself did not have any mold. I poured a very hefty dose of Nature's Miracle all over the mattress and let it air out in the sun all afternoon. When the day came to a close and we put the mattress back in I felt there was still some residual smell, so I sprayed the surface again with Nature's Miracle, left the port lights open in the stateroom, and aimed a fan at the mattress. We all spent the night on the settee in the main cabin, with barely any room for me beneath the menagerie of pets. 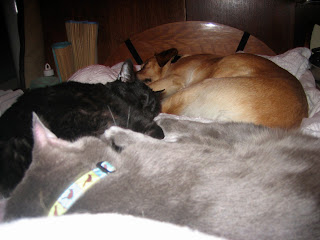 After another day letting the mattress air out and dry, the offending smells were gone. Virtually any cleaning job can be mastered, but some of them simply require the right product and enough time.

With the mattress out of the stateroom, we could now unscrew the piece of shelving atop the holding tank for open access to the tank fittings. Forward of the holding tank were two storage areas, so I said a little prayer for there to be lots of fancy boat equipment hidden away and forgotten by the prior owners. Alas, the lockers were filled with fiberglass housing insulation, some of which had gotten wet and moldy from condensation and some mystery water that kept seeping into the bottom of one locker (bilge water, presumably). There was also more Reflectix insulation in the lockers as well, which is the boat-appropriate insulation to use. Here are some photos of the lockers. I expect I will put a lot of winter clothes and such in space bags and store them there; the lockers are huge. I could just barely reach the bottom. 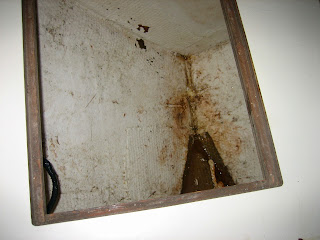 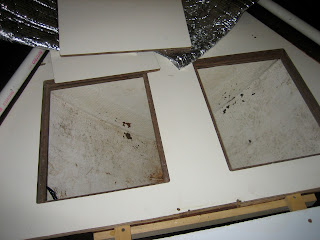 Now we were ready to tackle the main project. As one friend/reader had noted, sometimes you have to spend hours prepping to have good access for a job, but then the job will take fifteen minutes instead of five hours. I wish this had been a fifteen minute job, but it surely would have been even tougher had we not removed the mattress first to gain better access. Here's the view of the top of the holding tank. 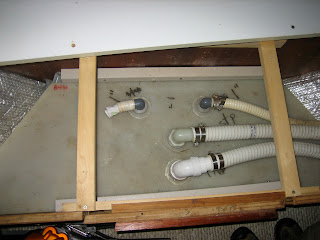 I left off with a small piece of hose stuck on the port vent fitting. I had tried previously to get a knife under the hose to break the seal that had formed over the years, but even the thinnest knife did not want to shimmy in there. 007 from S/V Octopussy had explained that the fitting is not smooth, but rather has a series of grooves. Once I could actually see that on the fitting I understood why it was so hard to try to pull the hose off--over the years the hose depresses into those grooves, as shallow as they are, and locks itself in. We followed a tip from 007 and repeatedly carefully cut at the hose lengthwise while pulling the hose away with a pair of needlenose pliers to help it split. It was a painstaking process both due to the stiffness of the hose and the fear of damaging the fitting, but it worked well. Although I had tried cutting the hose with this utility knife during my first stab at the project, between being a girl and having a nagging rotator cuff tear, this part of the job really benefited from the brute force a guy could contribute. 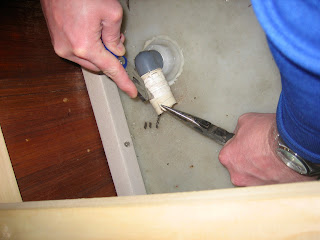 We high-fived and congratulated ourselves when we got that hose off. We figured putting the new hose on would be a snap. I had done plenty of studying up from Nigel Calder and Peg Hall (a/k/a The Headmistress) on how to install the hoses. First we pulled the new hose through to gauge that the length was correct. I had erred generously, and we used the hack saw to take off about 18 inches of extra hose. I climbed in the port hanging locker and the hose went on the thru-hull fitting with relative ease. I tightened down the hose clamps with a screwdriver. Yep, we were cruising along now. 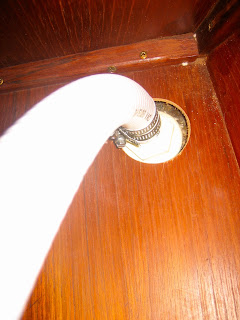 Yeah, not exactly. We lubed up the hose and tank fitting with Teflon grease but the hose would not come close to going on that fitting. I boiled some water on the stove, we soaked the end of the hose in it for a minute or so, and it slipped right on. Nigel Calder's not-inexpensive textbook on boat mechanical and electrical systems was well worth the price just for that one tip! (He strongly recommends this approach over use of a heat gun, which has a greater likelihood of damaging the hose). We tightened down the hose clamps and patted ourselves on the back. 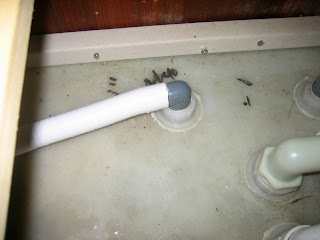 Now on to the starboard hose. We sawed off the hose a bit aft of the fitting and followed the same utility knife and needlenose pliers procedure to remove the remaining length of hose. Then came the thru-hull end. Rather than a hanging locker, this thru-hull is tucked behind a set of drawers. We pulled the drawers out and then realized that the drawer frame posed a significant obstacle to accessing the thru-hull. It was a major contortionist exercise to reach the hose clamps with a screwdriver and loosen them enough to be able to free the hose. I tried sliding my head and shoulders sideways through one drawer space but could not quite reach. I then perched beside the drawer frame and reached my arm through as far as possible while my friend shined a flashlight at the hose clamps. Every quarter-turn of the screw was a major accomplishment. We took turns trying to get at the hose clamps and just needing a break from the heat and the residual "eau de holding tank." We sawed off the hose at that end as well, leaving about a foot of hose to grab onto and yank it off the thru-hull. I'm not sure these photos really demonstrate how difficult it was to reach that thru-hull. 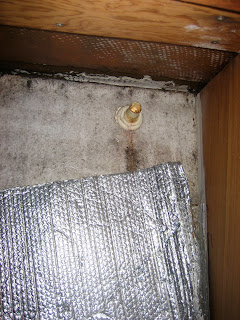 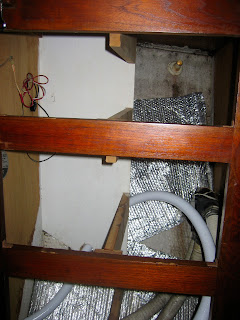 When we had removed the old hose we easily followed the same routine of Teflon grease and soaking the new hose quickly in boiling water to attach it to the tank fitting. Then came attaching the new hose to the thru-hull. Reaching in to tighten the hose clamps was the toughest part of the entire project. At least when trying to loosen the old ones we could get torque on the screwdriver because the clamps were tight. But trying to tighten clamps that just want to spin about...impossible. We tightened them down as much as possible before sliding them into place by pushing them with pliers and the screwdriver. But we simply could not reach the screws and get any purchase to tighten them down. We pulled out a borrowed socket set and found a socket that would work. Our momentary joy was quickly squelched when we realized that socket needed a smaller ratchet than we had. I popped out and asked the guy a couple slips down if he had the ratchet we needed. He did. Unfortunately, the handle was too short for us to reach the hose clamp. My friend quickly devised a solution. 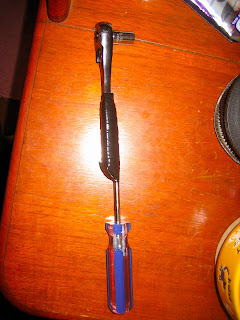 So with our taped-together ratchet-screwdriver tool my friend managed to reach in and tighten down the hose clamps. It was still no easy task because the space to maneuver the tool was tight, but it worked. And with luck, that particular job won't need repeating for another ten years. 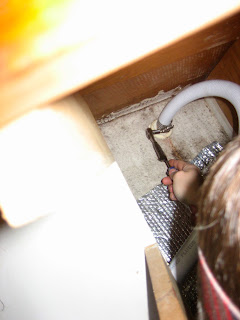 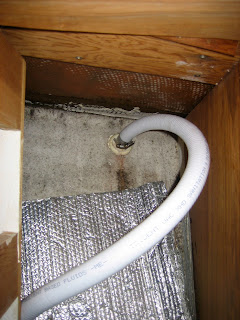 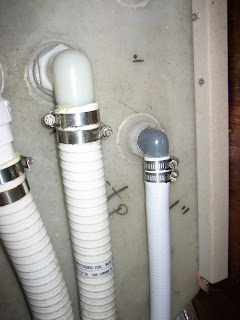 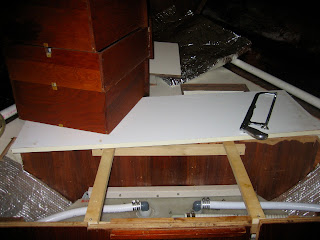 And so, sweet victory. My friend and I each learned some things from the other during the project and it's always good to have a friend who can McGyver stuff to find a work-around. I have had the luxury of using the head aboard for almost a week now, and offending cat pee and holding tank aromas are a thing of the past. Yep, I'm living the dream.
Posted by Suzy at 10:36 AM

Labels: boat bedding, boat repairs, cat pee, cleaning, condensation, holding tank, insulation, liveaboard, marine sanitation, mold, Nature's Miracle, pets aboard, pump out, storage, vent hose
Newer Post Older Post Home
a heartfelt thank you to my readers and friends i haven't met yet. i hope you enjoy the saga of our adventures and foibles. projects and plans do not always go smoothly. i am a smart, resourceful girl. i do things my way, on my schedule, in my budget. this is an unvarnished look at the life of a girl trying to get by.