Half a year aboard. I guess that's something of a mini-milestone and the next temporal one will be a year. Yesterday I started early with projects, feeling some momentum to make headway. At least I managed to bail out the dink.

Looking around inside the boat, it appears I've made little to no progress in the past six months. Clothes are in bags and piles. Random clutter inhabits every surface. It seems as if no amount of vacuuming can keep pace with the dog's shedding.

The weather yesterday was beautiful. Finally warm enough to open all the port lights, let in some sun and fresh air. The two projects I really wanted to get to were replacing the holding tank vent hoses and drilling out the hinge screw holes on my companionway door, then filling the holes with epoxy and wood plugs. A warm, dry day is best for epoxy work so that it will cure well. I should have started with the latter project so that perhaps next weekend I could re-sink the hinges and have a functioning door. Instead, I decided to tackle the vent hoses first. Getting rid of the stinky permeated hose would let me put away clothes in the hanging locker and free up space in the cabin, making it easier to clean and organize.


In theory, vent hose replacement is simple. The only tool required is a screwdriver for loosening and tightening the hose clamps. In practice, the job was not so simple. I went to work on the thru-hull connection first. I contorted myself to reach the hose clamps and quickly got them loose. I twisted, tugged, and pulled the hose, but it would not come free from the thru-hull. I worried that the fitting would fall out into the water and considered duct-taping it down outside. Donning my goofy headlamp, a mask for mold and smells, and rubber gloves, I begrudgingly went a couple slips down and asked for help. To be clear, I was only asking for their advice on how to remove the hose. I just don't think you can ask for volunteers with head-related projects; those projects are icky and smelly enough that I think you have to pay real cash money to someone to help. But one guy offered to hold down the thru-hull from the outside while I tried to break the hose free. He seemed to think the thru-hull was not going anywhere and was nice enough to come inside and after some twisting and pulling get the hose free of the fitting.

On to the unpleasant end of the project: disconnecting the hose at the holding tank fitting. The working space there is much smaller unless I disassemble part of the berth, which is likely what I will end up having to do because the starboard vent connection is even harder to reach than the port one I was working on yesterday. I loosened the hose clamps, one of which promptly broke anyway. I was able to twist the hose back and forth on the fitting, but like the other end, it would not come free of the fitting. I figured it may be easier to work with a smaller section of hose, so I used a hack saw to cut the hose away about an inch past the fitting. I stuffed a paper towel in the end of the hose to cut down on the smell and took a study break. 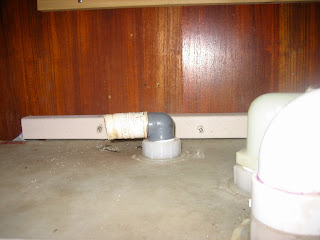 I looked online and found no useful information or handy YouTube videos (apparently no one on Sailnet or Cruisers' Forum has had this problem...not likely, but I can believe they wouldn't admit to it.) I referred to Nigel Calder's Boatowner's Mechanical and Electrical Manual and Peg Hall's Get Rid of Boat Odors. They both have useful information for installing the new hoses, e.g., Nigel Calder suggests dipping the end of the hose in boiling water to soften it to slip over the fitting more easily (rather than using a heat gun), and Peg Hall suggests lubing the fitting up with some K-Y. I will likely use both suggestions. But to remove the old hose that is stuck on the fitting the only advice I've found is to soften it with a hairdryer. I was hoping to avoid that because I will have to link a couple of extension cords together to reach all the way inside the boat since plugging a hairdryer into the boat's electrical system would almost certainly trip the breakers.


I went back to the project a couple of times, trying to pry the hose off the fitting with a screwdriver, (which risks damaging the fitting), and trying to cut the hose section with a utility knife, which could also have damaged the fitting if the knife hadn't been utterly useless against the hose. I really wanted to finish that project, or at least one of the hoses.

Six months in and I can't even finish this simple project that requires no power tools. I know exactly how to do the job, but I'm not strong enough to pull the stupid hose off the fitting. I hate that feeling of defeat, weakness. I will probably have to hire someone to help me with this simple project, but don't even have the money to hire anyone right now. At least the port hose is removed and I can plug the fitting for now. The tank is still vented to starboard. I can clean the hanging locker again--the moisture and mold keep coming back from the cold weather--line the locker with some insulation, and actually hang some clothes there. I guess I have to find the little success even if I lost the battle against the vent hose for now.


As if my plate wasn't full--though admittedly, no matter how much progress one makes the boat project list never shrinks--I also need to follow up on the water pump. The new pump occasionally cycles on when no faucet is open. That is a sign of a leak. I get weak pressure at the galley sink, but very forceful pressure in the head sink, which is twice the distance from the pump. Investigation has revealed that the separate spray nozzle at the galley sink drips quite a bit when the faucet is on--but does not do so when the faucet is off. It's a leak that needs to be dealt with, and may account for the lag in pressure there, but I don't think it's the cause of the water pump cycling on when it shouldn't. It seems that the cycling on problem occurs when the water heater is on, which I only use for hot water for dishes as it draws a lot of electricity. My working hypothesis right now is that there is a leak somewhere between the water heater and the pump. It's a project I will bring in help for so that I can learn how to find and fix it without further mucking anything up. I also want to know whether I have a heat exchanger on my water heater; if so, I can heat water from the engine's heat when motoring, which would be quite useful when cruising.

Although I am frustrated that I have not made more progress in these six months, that I have not renamed the boat or held boatwarming festivities, I am trying to cut myself some slack and give myself credit for learning how to survive winter aboard a boat, learning how to manage three pets aboard, for embracing a lifestyle I was meant for but that certainly presents its quirks and challenges. I am grateful I have many local friends I can turn to if I want advice, since oftentimes the folks most insistent on offering up their advice aren't the ones whose advice you actually want.

I couldn't pass up these adorable Easter lambs on sale today: 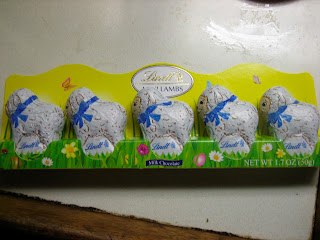 I had a great Easter brunch with good friends. But I do miss Easter baskets. I prefer to give gifts than to receive them; I love to pick something special for someone and see them enjoy opening a gift. And although I am not religious, I am very spiritual and embrace the renewal, fertility, and rebirth that bunnies and eggs represent. Now that spring is blossoming I must focus on renewing myself through running, a rebirth (i.e., renaming) of the boat, and getting the boat in shape for a boatwarming and general entertaining. Progress will come. It has to be our turn for some fair winds.
Posted by Suzy at 10:48 PM