Being on a tight budget, I didn't really have a "spa day" in the girly-girl sense, but I did spend 3 hours and 45 minutes moving between six different geothermally heated hot pools at the Polynesian Spa in Rotorua. I had considered going to a less fancy, but actually pricier, spot outside of town that has mud baths, too, but it would have been a chunk of money and a shuttle ride to get there and back. It turned out that Polynesian is just two blocks from my hostel, Crash Palace, so I couldn't pass up the ease of that.

Three of the pools in the Adult Pools and Priest Spa area are alkaline, excellent for the skin, and three are acidic, good for relaxing sore muscles. Temperatures are 39C/102F, 41C/105F, and 42C/107F. I tried to drink plenty of water from the fountains and had to pop in and out to cool off a bit now and then. The view was stunning, looking out at an acidic and very geothermally active section of Lake Rotorua, with steam rising off the water and birds enjoying the refuge, though nothing can live in the highly acidic and oxygen-depleted water, so the birds have to forage elsewhere. A few of the pools have cover if the sun or rain are too much, but when soaking in that super-heated water, the sprinkles and misting that came down now and then were more a relief than an annoyance. I spent my first and last soaks in the large pool right on the lake front. A couple of feet of geothermally active hot rocks are all that separates you from the lake, so you feel very connected to the natural environment. I didn't want to worry about having any valuables with me or paying for a locker so I didn't take a camera, but you can check out the view on the Polynesian Spa website. Access to the Adult Pools and Priest Spa was NZ$27 plus NZ$5 to use a towel. The Deluxe Lake Spa is a little more, but it is only alkaline pools and I definitely wanted to try both. Being the off-season it was uncrowded, with at most four or five of us in a pool at once, and usually I was by myself or with just one or two others. Probably half of the people there were tourists and half were local Rotorua residents, who can purchase a discounted pass. If I lived here I'd surely be in there after every long run! (And, yes, my runner-friends, there is a Rotorua Marathon to come run!)

I chatted with several Kiwis and one American couple. It is so wonderful how much the Kiwis love their country and how genuinely interested they seem to be in finding out if you are enjoying your stay and in giving tips on what to see and do. The scenery has been breathtaking both in the Cooks and in Aotearoa (the Maori name for New Zealand), but by far the notable discovery and highlight of the trip has been the wonderful, kind, and interesting people I have met. Traveling alone has some (but not many) downsides, but one big upside is being more likely to interact with locals. If you don't eat local food, talk to local people, and learn local langauge, I just don't think you're experiencing another country.

I was exhausted after all that relaxation, or more likely just famished and dehydrated. I had some chocolate then made brie sandwiches for lunch. I had hoped the electrical outlets might be fixed in my room at the hostel, but no such luck, so not bringing my solar charger on this little side trip was a mistake. My phone ran itself down overnight and the ipad really needs overnight to be fully charged, so I'm limping along on battery warnings todays. The hostel owner charged my phone overnight, but it means I didn't have access to it until morning. The hostel provides some free food to cook, including instant coffee, tea, a full range of spices, pasta, and cereal. The hostel is "dry" so you can't bring in your own alcohol and have to buy it from the hostel to drink there in the common areas, but the prices are a little lower than at bars in town. The atmosphere is a little more friendly and communal than the hostel I stayed at in Auckland. The big downsides for me were not being able to charge my toys in my room and no lockers in the rooms. So if I want to lock up valuables I have to use a locker in the lobby, though at least they are under video surveillance. The rooms also lock with traditional keys, so if I have a roomate who doesn't lock the door when leaving anyone can just walk in the room and take things. The owner acted like the electrical problems were due to recent work by the landlord, but there are reviews online mentioning the same problem so I tend to think it is status quo and the hostel is just bullshit. I was pretty happy to check out and pay NZ$5 to store my bag at the information center for the day.

The only time I've felt at all unsafe on the trip was walking from the hostel at just 7:00pm Wednesday evening to get to Brew Bar where Aussie Shaun Kirk (http://shaunkirk.com/ such a shame he doesn't have the hot blonde dreadlocks anymore... but I digress) was playing a free show to kick off his New Zealand tour. The streets were deserted and a couple of young Maori guys started following me, likely teamed up with two young girls up ahead of me who aggressively said hello, probably just to gauge my accent. These guys were far from being the huge Polynesian guys Americans are familiar with as American football players, so if they really decided to give me trouble this runner could pretty easily leave them in the dust and they'd learn quickly that I'm way meaner and more trouble than they'd be planning on. I met some Kiwis while at Brew Bar so they walked back to the hostel with me for a beer and a couple games of pool before calling it a night. They seemed surprised I'd walked that whole way alone, but it was only 10 blocks at most and couldn't look tamer, especially for someone who walks around Baltimore after midnight alone.

Thursdays from 5:00pm to 8:00pm are Farmers' Market night in Rotorua. It was an excellent way to have dinner without committing to one thing. I started with two large steamed pork buns for NZ$4, walked the length of the market eyeing all the food and cool stuff for sale, and rested over a real pint of cider at an Irish pub. I had some yummy chicken nuggets (NZ$5) from one stall and then a piece of Maori fried bread (NZ$3) with butter from another. Dessert was a lemon and sugar crepe (NZ$5), soooo good. 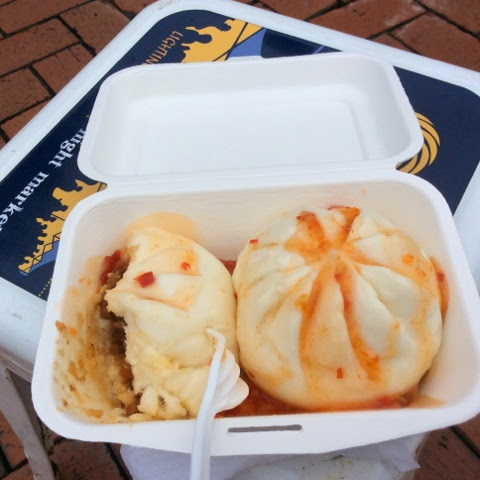 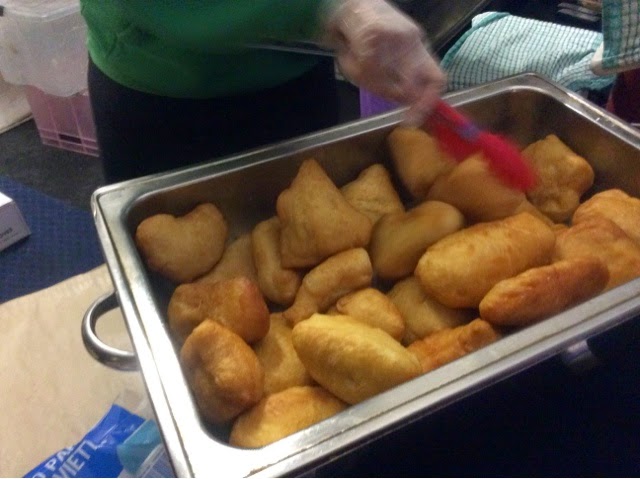 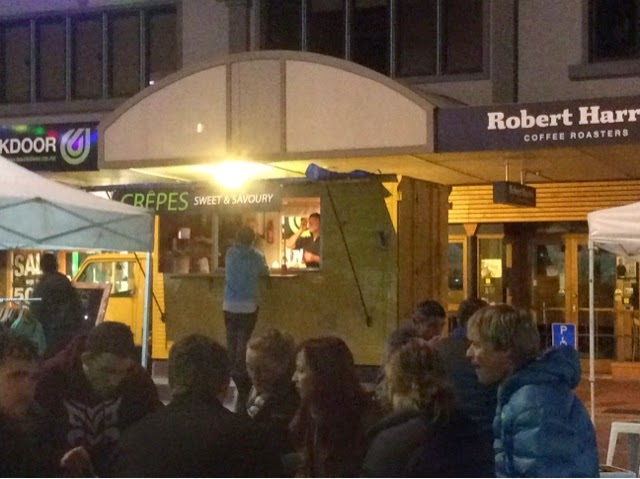 I forgot to take pictures of some things, so I went back to the stall with traditional Maori food and asked to take a couple photos for my blog. The sisters who run the stall are very friendly and it occured to me to ask them if the mask on the ten cent coin has any particular meaning. (http://en.m.wikipedia.org/wiki/File:New_Zealand_dollar_coins_May_2011.jpg). I really like the design, which looks like a cat, and a butterfly, and a warrior, all at once. And I am all those things, so it suits me well. The design already has koru in it, so I just want to see if an artist would incorporate a fish hook into it, perhaps on the tongue. But as one non-Maori woman mentioned to me, some Maori tattoo artists, particularly very authentic ones, might refuse to give me a traditional tattoo because I'm not Maori. And I do understand that it can be tacky and disrespectful to get a traditional design as a random tourist thing, particularly because ta moko, traditional Maori tattoo art, is considered a sacred ritual. When I was asking the sisters about the design I told them it would be for a tattoo and that although I'm obviously not Maori I am part Cherokee and Sioux from the US. They nodded approvingly and said, "So you're still indigenous!" They also told me to tell the artist about my family history because they incorporate that into the design, it tells a story of your heritage. They didn't know any specific meaning to that design, but suggested asking the artists or other Maori designers if they happen to know. I was thinking I'd go get a tattoo at a shop in Rotorua before the bus back, but the artist I wanted to see was out of town. It's also just very difficult to get in anywhere without a couple days' notice, which is hard to manage when traveling.

I couldn't pass up two little trinkets I found at the market. A pair of very lightweight purple earrings with a koru pattern for NZ$15 and skull hair barrettes for NZ$5. Both artisans were very friendly and helpful, but I don't think they have online stores going yet, though one does have a Facebook page. 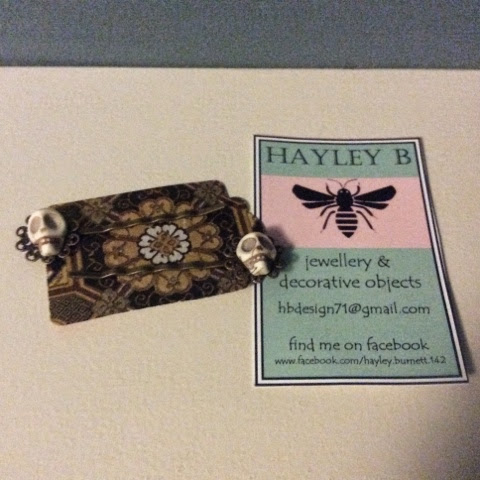 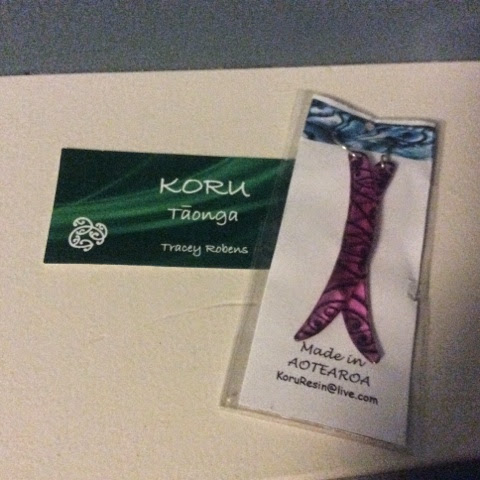 After the market I walked around looking for live music or a good scene but the streets were pretty quiet again. I popped into a different Irish bar for another cider. The bartendress had recently been in the US for her father's funeral and we chatted a while. She popped out with another cider and said it was on the house since I've had a hard time on the trip. I thanked her and told her she was too sweet! She gave me some tips on getting a work visa for New Zealand, and that the boating industry or ability to cook might be good avenues. The most important thing is to find out what industries they need, find an employer who wants me, and have them file the request. Hmmm... I might need to get Ambrosia ready for some big blue water...

Before taking the bus back to Tauranga I took a city bus to The Redwoods, a free set of trails in the Whakarewarewa Forest. It's a large native forest but was also planted with a variety of exotic trees, most notably towering California Redwoods. It was a gray, rainy day, but the forest was amazingly green and only cost me the NZ$5 round-trip bus fare. 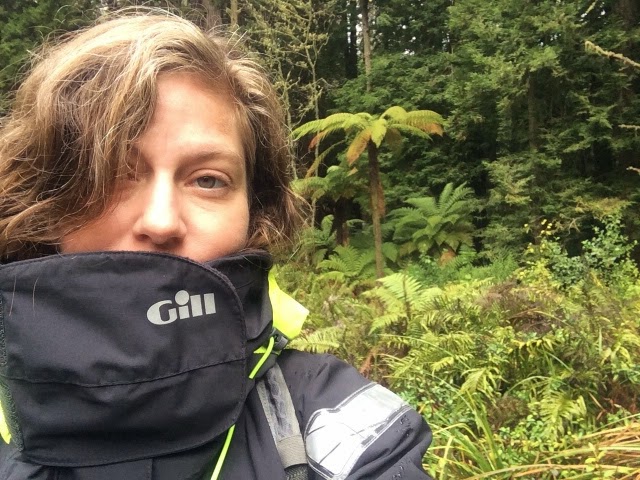 I'm definitely missing my pup and cats but I will be sad to leave New Zealand...less than three days until I fly back to reality. I have a few short, goofy videos from the Cooks and New Zealand that I need to get up on the YouTube channel.
Posted by Suzy at 6:56 AM