A lot of milestones this time of year. Yesterday marked two years since I closed on Ambrosia, the first and only home I have ever owned. It is bittersweet insofar as I feel I should have made so much more progress on boat repairs, sailing skills, and miles under keel than I have. But I live hand-to-mouth and there is only so much one can do on such a constrained budget. I either have time or money, but never both, and both are necessary in order to afford equipment and make repairs. So I plod along and do the best I can. If that isn't good enough for someone, they can, well, fuck off. Apparently a lot of people relish giving me crap about being in a floating apartment and not sailing my boat enough. But they aren't cracking open their checkbooks to fund the repairs so they can shove it. And to the great disdain of many sailors, the sailing just doesn't really matter to me. I don't live on a boat so I can daysail around the Chesapeake. I live on a boat so I can be rocked to sleep by the sea and so I can experience endless locales. Cruising for me has nothing to do with raising the sails and everything to do with reaching a peaceful anchorange in Paradise and then a bustling port full of a cacophony of sounds, smells, flavors, and new adventures to embrace. It's great that some people love just sailing around even if they never get anywhere in particular. But they aren't better than me and I'm not better than them. There are a myriad of reasons people choose to live aboard and/or cruise and people would be wise to respect that and be more open-minded, but, yeah, people are stupid. I've been connected to the water my entire life and can't imagine being land-locked, but boating for me is similar to loving a roadtrip but disliking driving (which is also very true for me). I love the personal/spiritual journey, but otherwise it's all about the destination and that adventure. The actual transit, whether by boat or car, involves time, stress, and money, I can't relax or have a cocktail, so it's work. That part is something to be endured so that I can get to some interesting new destination. I guess I'm quite the opposite (and thankful for it) than all the folks who enjoy their sail to the Bahamas and then never spend a dime ashore because they are too cheap and would rather eat all their Costco provisions from Florida and/or who are too scared to leave their boat and venture around the islands actually experiencing anything. Okay, I do think I'm better than those people, so sue me.

Last night I had a strange nightmare that most of the lines on the boat snapped and the boat lurched and rolled when only a stern line held it in a storm and I was flung in the air, trying desperately to hold onto the bow railing. I was tossed about but survived and the pets were all okay.

Another big milestone today: Hunter's first swim. After a long day commuting to DC for junk project work, I got home, walked the pup dog, and took a shower. Shortly after I got back from the bathhouse I heard Hunter wailing. He only makes that kind of loud, guttural cry if he's in a fight or hurt, so I popped my head out the hatch and called to him, but I didn't see him. Then I looked down. Halfway between the dock and the water, there was Hunter, soaking wet and bedraggled, clinging to the piling by his claws and wailing. I immediately talked to him so he knew help was there and jumped off the boat. At first I was going to try to get him to grab the mat I had tied off to a line just for this purpose, but figured if he had any more climbing in him he'd have kept climbing up the piling. I had to lay on the dock and hang over the edge to reach him. He was slippery and thin, and I was worried about him sliding out of my grasp. But I got ahold of him and started pulling him up. He leapt to the dock and ran right onto the boat. The cabin sole was soaked and he tucked into the very forepeak, trying to lick himself dry. I kept trying to towel him off, but he resisted. Eventually his brother came in and helped him dry off, likely explaining that he's "been there, done that" twice already and everything would be okay. Just a mintue or two after I pulled Hunter up a dockmate came by asking if I'd gotten him out. He had heard the cat crying all the way at the other pier and come to help. It's a good thing that cat has a set of lungs on him and I'm grateful there was a dockmate alert enough and who would care enough to come help. I feel bad for Hunter, but it's a lesson better learned at the dock in early fall than while under way or in the winter. He's a brave kitty and I'm glad he's got a good survival instinct.

In just a few days it will be my two-year anniversary of living aboard. I'm grateful to say that I can't imagine living any other way and I don't regret moving aboard at all. Are there things I may have done differently in hindsight, of course, but working within the financial, logistical, and tempero-spatial constaints I have, I think I've done well, adapted well. While living aboard is definitely not for everyone, it suits me. I've also found that I have a lot more inner strength, stick-to-it-iveness, and determination than I or others gave myself credit, and--as when long-distance running--I know I have an amazing reserve of resiliency to draw on to get through just about anything life throws at me. My recent adventure was quite an adventure, though not at all the one I had planned. But I rolled with it, made the most of it, thoroughly enjoyed myself, challenged myself to leave my comfort zone, and found that my "centeredness" really does give me the balance and strength to do and survive anything.

A postscript/portmortem on the sleazy captain will come shortly. For tonight, I am thankful for my boat; every night I tell her that we love her, that she has saved our lives and we are working to save her, too. I am thankful for my pack, who love me even if they fall overboard, who put up with all the crazy I put them through. And I am thankful for all the amazing people I have met along the way in this cruise through life that has been anything but a "cruise."

Here are a couple of snaps of the new ink now that it is all healed. I love the piece and hopefully I will make it back to the land of the long white cloud sooner than later and for the long haul. 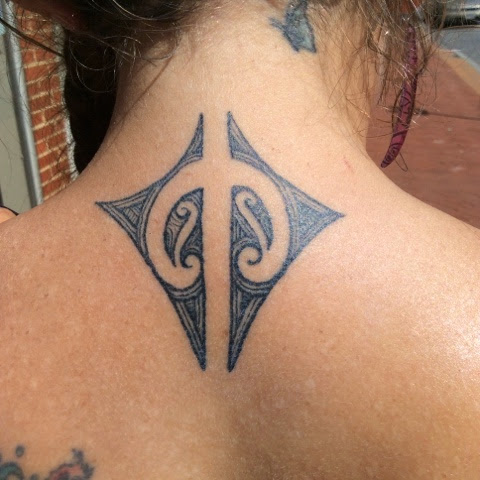 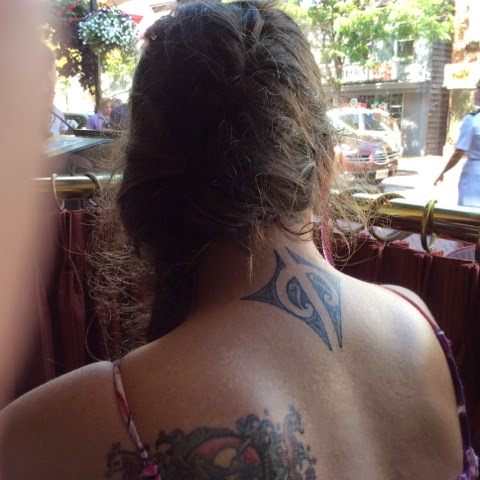