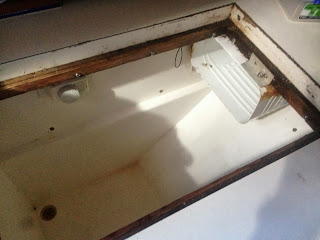 Yes, I am in favor of full (medical and recreational, state and federal) legalization of marijuana, but no, I'm not talking about that kind of reefer. Boat folks tend to refer to their icebox/refrigerator/freezer units as "reefers." Mine is a converted icebox, meaning it is an icebox to which a cold plate and compressor have been added. Much of the weatherstripping on the lid had come off and replacement attempts were less than successful. The back side of the lid had no stripping at all. Around one corner condensation continually forms on the counter, meaning a lot of cold air is escaping and running up my electric bill. Eventually, the entire cold plate frosted up and condensation dripping back in from the counter top formed a large icicle inside the corner, further exacerbating the problem by preventing the lid from closing flush. 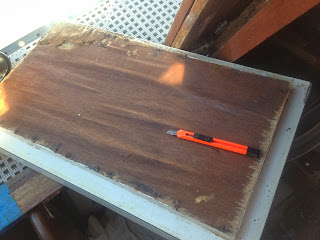 I finally got around to the project of removing everything from the fridge, putting it all in coolers on the deck, and defrosting. Once everything had melted, I used my micro Shop Vac to vacuum out the water. I used a razor blade to cut the old weatherstripping off the lid. The remaining adhesive wouldn't come off easily, but using a green scrubber pad and simple dish soap finally did the trick nicely and without having to buy anything I didn't already have aboard. Once the adhesive was all removed and the lid was dry, the real project began. I taped waxed paper around the ledge on which the lid rests and then put a large bead of silicone all around the perimeter of the lid. This method of creating a custom gasket came from The Boat Galley. 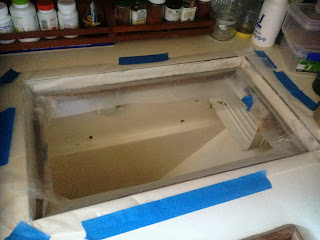 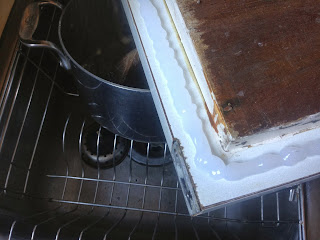 I used about two tubes of silicone, and wished I had had another or had just bought a caulking gun and a gun-sized tube. I made due with what I had. The silicone skins over in about ten minutes and cures in twenty-four hours. I waited about twenty minutes before setting the lid down on the waxed paper and then left it alone for twenty-four hours. A lot of the waxed paper stuck to the silicone gasket when I opened the lid, but it easily pulled off. Unfortunately, the way the lid hinges up from the back seems to have forced the silicone on the back edge up against the center insulation section of the lid. Although the lid is closing flush, I am still getting condensation on the counter along the back right corner. I am considering adding more silicone along those sides, but worry the same thing will happen. I'm wondering whether adding a bead of silicone along the side of either the lid or the reefer, rather than adding more to the underside of the lid, might work to seal that gap. But with that plan I am concerned about having the needed space for the lid to swing up to open. So, the project was partially successful, but will require some follow-up and tweaking. 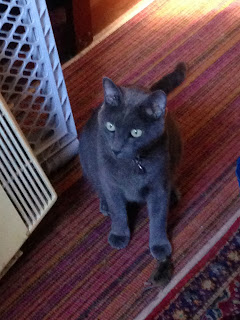 Hunter keeps catching mice! Four last week. He dropped one on the side deck outside a port and I think I may have stepped on it when I went forward to deal with pumping out because it was partially squished and I've had a hard time trying to rinse all the mouse-guts off the deck. To keep track of his accomplishments, I've added a "mousenator" tally down on the right-hand side of the blog for anyone keeping score. I think he actually ate every last bit of this last one, which pleases me, as I do not enjoy the crime-scene clean-up. However, he was a small, feisty, cute little guy, with shiny black eyes and adorable little ears. Now all that cuteness is crunched up in Hunter's tummy. But believe me, as long as Hunter is aboard, no rodent will ever be chewing through any hoses on this boat! That cat is like a heat-seeking missile to mice. He got that last little guy within fifteen minutes of going ashore, and after dining on him he was crying at me wanting back outside to catch "dessert."

On the boating law front...boaters need to pipe up and respond to the survey on the anchoring and mooring field pilot program in Florida. (The link will take you to a page with links to the survey as well as the ordinances in the pilot program areas. Personally, the survey is poorly drafted, failing to ask the right questions or asking questions in a very skewed way.) As some readers may know, Florida municipalities began enacting all sorts of ordinances to restrict anchoring and attempt to get rid of folks living on their boats. There is a general attitude in Florida that all liveaboards are practically homeless, illegally pump overboard, and are unproductive members of society. Long before I myself became a liveaboard I battled that attitude and tried (in vain) to prevent the loss of liveaboard dockage while I served on the City of Miami Waterfront Advisory Board. In the years since I left Florida a pilot program was instituted allowing select areas in Florida to regulate mooring and anchoring. Despite its huge coastline and the importance of the maritime industry, Florida is very unfriendly to folks living on their boats and if one is a "liveaboard" forget about having much freedom or anchoring rights. Gratefully, the legal definition of "liveaboard" under Florida Statute sec. 327.02(17) basically encompasses folks who never use their boats for navigation. But to be on the safe side, once in Florida be sure to be a "cruiser," even if your cruising grounds are just from the mooring ball to the pump out station. I'm very interested in cruising down Florida way, but the anti-liveaboard attitude and excessive regulation make me want to find someplace else to go. I'm not very keen on government or anyone telling me what to do, which is probably exactly why they hate us uppity liveaboards.

My hopes of going south sooner than later depend on banking some cash from the sale of my furniture and other stuff, as well as getting necessary gear and making certain repairs. So far I've only managed to sell the three largest furniture pieces and still have a crazy amount of furniture, artwork, clothes, and shoes cluttering up my life and holding me back. I'm hoping to spend a couple days having a moving sale and just suck it up and deal with the random public coming through. One way or another, everything must go! Not only do I need the cash to pay bills, the longer everything sits around the more it costs me to store it. Having all this "stuff" hanging over my head is interfering with my marathon and ultra training and with getting projects done aboard, so I'll be incredibly relieved when it's all gone.

On a positive note, several goodies from my Amazon wish list have arrived or are on their way. From financial donations and wish list items, to helpful books and rum, I am immensely grateful for the support (both financial and moral) from friends and readers. It means a lot to me and I won't forget it. I do my best to pay it forward and help those I can. There will always be an endless supply of doubters, but anyone who thinks I won't accomplish whatever I set my mind to clearly doesn't know me at all. The plan may have some amorphous outlines, but I'll leave them squishy and keep the plan a flexible "there is no plan," because I'd rather just make things up as I go and keep everyone on their toes (myself included). Where I'm going isn't a place, there is no lat and long to head for. It isn't the state of Florida, or Maryland, or the Carolinas. I'm plotting a course to a state of mind, a state of being, a state of peace.
Posted by Suzy at 3:36 PM