This past week was intense and exhausting, but also a huge step forward. Monday through Friday from 9AM to 4PM I was at J World Annapolis for my Basic Keelboat certification course. Monday morning was a scramble as I had promised Travis I'd get him to an Amtrak station to catch a train south to his boat. The day before I had volunteered at the Annapolis Ten Mile Run pouring beer, so two days in a row of 6AM wake-up calls were tough on this gal who usually sleeps until 9AM or 10AM. Traffic to Baltimore wasn't bad and we were just making it in time that he'd make his train and I'd get back to Eastport in time for class. But for my iphone GPS having other plans.

When I told the GPS I wanted to go to Baltimore Penn Station it instead decided to send me to Penn Street. Unfortunately, Penn Street is near Orioles Park and still a ways south of the train station, which is just south of Charles Village. Once we realized the GPS was sending us in circles on one-way streets nowhere near where we needed to be, I managed to get the correct street address entered into the GPS app. But now time was of the essence, especially to catch a train that only runs once a day. So, with the navigational mishap and morning traffic it took an hour to make it to the train station. I flew south back to Annapolis in half the time, calling J World to let them know I was running late and trying to get there as fast as I could. Although I seem to be perennially 15 minutes late, a condition I blame on spending half my life in Miami, I actually hate being late and keeping others waiting. I was 20 minutes late to my first day of class, but gratefully they hadn't jumped aboard and shoved off from the docks without me. I apologized profusely to the staff and my one fellow student.

It was nice having just two of us for the course. We got along well and it meant we each got plenty of time at the helm and working on sail trim. Early on it was clear Luke enjoyed the thrill of burying the rail and that I don't seek it out, though I am certainly more comfortable than I once was with pretty significant heeling of the boat. Day one was about sailing upwind close-hauled and downwind on a broad reach, sailing to the telltales or jib sheets, learning how to find the groove to sail as close to the wind as possible, feathering up into the wind briefly to control excessive heel, and tacking and jibing. Day two we had a father and son along as well who were making up a day in their weekend course that had been cancelled due to weather. Day two we worked on "rock around the clock," with each student taking the boat in succession through close-hauled, close reach, beam reach, and broad reach on both port and starboard tacks. As we headed out on day two I spotted a wayward fender and convinced our instructor, Andrew, to let us sail close enough for me to hoist it aboard. Those puppies are about $95 new and even $45 used, so I'm happy to have added a free one to my collection! Days three through five we had a different instructor, Channing. Both Andrew and Channing were great coaches and I highly recommend J World. Although I am not interested in racing and J World is definitely racing oriented, you don't need to be an aspiring racer to have a productive and enjoyable learning experience at J World. The three coaches I've had there (Mark, Andrew, and Channing) were all knowledgeable, supportive, and professional, equipment is kept in good condition, and they get you right out on the water.

Like me, Channing was an undergrad philosophy major and Luke has a definite philosophical bent, so we had some interesting conversations and philosophizing while out on the water. They laughed that I certainly was a philosophy major when I mentioned the irony that learning to anchor and dock, to tie my boat down, are the skills that will set me free. One day Channing was telling Luke to be more gentle with the tiller, that sharp, sudden movements on the tiller and rudder just make you lose the boat speed you're looking for. I smiled and piped up  wryly, "Not unlike making love to a woman." In both cases, once you find the groove, it's smooth sailing, but be too rough or inattentive, and an accidental jibe or auto-tack will ruin the moment! Ay...I just need to find a floppy-haired sailor who understands how to find the groove with this mermaid.
We did lots of man overboard drills, learned how to heave-to so we could stop for lunch, spent time trimming sails to a course and sailing to a particular point of sail. We covered rules-of-the-road in lecture and then applied those rules over and over while out on the water. Surprisingly enough, we had more sailboats violate the rules of the road than powerboats. We were hove-to on a starboard tack (so we would have right-of-way) enjoying our lunch and some old guy on his sailboat would've just plowed right into us if we hadn't moved! As the written and on-water exams neared, it was clear that Luke was nervous about the written one, which I knew I'd nail, and I was nervous about the on-water, which Luke would excel at. I learned rules-of-the-road and boat terminology quite a while ago, so the majority of the written exam was not new to me and I'm a test-taking machine. I ended up with a 96% and, being a grade-junky, I had to look up the correct answers to understand why I missed those three questions I got wrong! I think I sailed better on Thursday than on Friday during my practical exam, but I passed. I'm not ready to singlehand under sail, but it won't take long to get there. For the most part it's just a matter of practice, practice, practice. The course was on a tiller boat and mine has a wheel, so I will need to get used to that difference, but wheel steering is more intuitive for me so I think it will make sailing Ambrosia easier for me.

The last day of class was the windiest and also had the most boat traffic on the water. We managed to get the boat surfing and reached a max speed of 8.7 knots as I sailed downwind. The water was choppy with plenty of waves being kicked up from the wind. As we approached the channel to return to the dock I had the boat surfing. We hit an area where the waves and powerboat wakes were in contradiction, the winds were shifting, and a gust hit. The tiller was very hard to control due to the strange wave action and "Boom!" accidental jibe. Channing told me to remain calm, which I was, and not let the boat round up. I quickly got her back on track and he looked at me and said, "There, you had your first accidental jibe;" and then very sternly and seriously, "now don't do it again!" All was well, no one was hurt or even shaken up, but an accidental jibe can easily send an unsuspecting crew member overboard as the boom swings wildly across the boat with incredible force. It is particularly sneaky because the sensation is that there isn't much wind at all and the boat isn't moving fast because you aren't feeling the wind in your face and the boat isn't heeled over. But the reality is that the boat may be moving very, very fast and the boom may be swinging almost 180 degrees from one side of the boat to the other. Although it's not good to have it happen, I'm actually glad it happened while I was in a course and could learn from it. It was a great, but very exhausting week. A big thanks to my mother for making the course my birthday present. 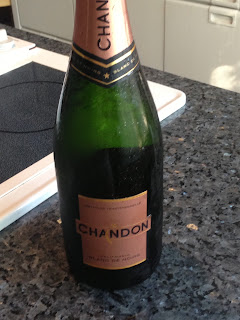 To celebrate successfully completing the week-long course, I popped a bottle of Chandon gifted by my friend Michelle at the boat re-naming ceremony. Sure, I could down a nice bottle of bubbly on my own, but celebrations are better with friends, so I fêted with my good friends from S/V Octopussy. I showed off my fancy new "official log" that looks like a passport and has a shiny holographic sticker documenting my Basic Keelboat certification. Certifications and fancy logbooks don't make a good sailor, and I have much to learn and practice, but it will be nice to have a handy place to document time on others' boats as well as my own, since my ship's log is only for Ambrosia's journeys.

Yesterday I finally managed to connect up with a friend who had offered me a 4hp outboard motor for my dinghy. Yay! Now once I get the dink patched up I can pirate all over Back Creek in search of wayward fenders and other flotsom. And, of course, a dink with some vroom-vroom can get me and pup ashore when anchored out and having adventures. Thanks, Jody, for the outboard, and thank you Mike and Dave for carrying it aboard and mounting it to the rail. I'm blessed to have generous friends in my life.