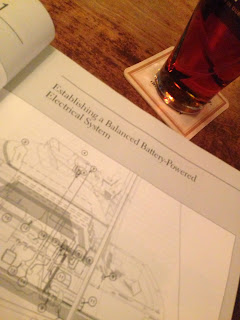 Under the gun to pay bills, it was just my luck to have two shifts cancelled so far this week. I tried to make the best of the unexpected time off and schlepped an enormous bag with three loads of laundry to the little laundromat downtown. No one ever seems to hang out in the laundromat waiting and it seems like a nice enough spot that no one will steal my panties, so I went across the street for a couple pints. I brought along homework. (See photo.)

I was studying up on battery systems aboard because I was meeting later that day with a friend to discuss my power needs so I could plan out battery bank upgrades and my solar power requirements. I still need to sit down with an Excel spreadsheet and run all the numbers on my load requirements both at a marina (with the luxury of shore power) and on the hook. I'm hoping that a couple of solar panels will suffice to keep my batteries charged if I try living on a mooring ball or so that I can cruise south and spend a few nights on the hook for every one in a marina. No way I could afford a marina every night heading south.

My friend bravely climbed in the lazarette to peek at the current batteries. Looks like I have a small sealed battery for my engine start, and then two large flooded batteries for my house bank. I knew that one of the house batteries is dead, so the plan will be to replace both with a series of golf cart batteries (which I should be able to lift) instead of the huge marine batteries I have now. Looks like I need to add some distilled water to the working battery, so I brought a gallon back to the boat and now have to crawl down and figure out how to fill it. I'm sure it's not that complicated, but since I've never done it before I'm always nervous about screwing something up. Not sure when I'll get around to an upgrade on the battery bank, as it isn't in the budget right now, but I at least want to know what my power needs are and try to get a sufficient solar array in place.

Another liveaboard friend met up with us and we headed to Vin 909 for dinner. It's the top Zagat-rated restaurant in town, doesn't take reservations, and serves up great, affordable food in a mellow atmosphere. I insisted they let me choreograph the meal for us all to share. A friend selected a bottle of merlot for the table. We started with a selection of three cheeses (served with apples, walnuts, crostini, and a tomato jam). Then came a margarita pizza. For thin-crust, this is the best pizza in town, bar none. (At at $9.50, a steal.) We still needed a little something before dessert, so a plate of warm olives and almonds with crostini was the third course. We finished with the not-to-be-missed butterscotch pudding. If you're in Annapolis, drop by Vin in Eastport for some eats.

When we got back to the boat we might have had a couple too many shots of Myers Dark rum. One of the cats went missing and despite looking everywhere in the yard, calling him, and banging the food bowls, he wouldn't come home. The cats have always been inside-only until the past few months. Although they have claws and aren't tiny, they don't know about the dangers of the world...cars, foxes, other cats, bad people. I broke down in tears because I couldn't find him. I left ports open so he could jump in, though it meant the other cat could also get out. When I woke at 7AM I shot of out bed: "Hunter!" I looked everywhere, but he wasn't on the boat. I went topsides and clanged the cat bowls and he came running. A huge sigh of relief. I have no idea if he catted around all night or slept aboard, but thank god he came home safe and sound.

Now I've clearly created monsters; they cry at the door if I lock them in. It's finally cool enough that I can avoid running the air conditioning if I leave the ports open for a breeze, but that means they jump in and out through the broken screens as they please. If something happens to them, I will blame myself forever. I am trying to tell myself that they are happier than they ever have been; chewing grass, lounging in the sun, rolling in dirt, and killing things. If their lives are shortened by going outside I will be crushed. But perhaps their lives will have been fuller, happier, more adventurous. Not unlike my own. I think of the conversation between Dory and Nemo's dad in Finding Nemo; he says he promised Nemo he wouldn't let anything happen to him, but Dory wisely notes that not having anything happen isn't very fun for little Nemo. 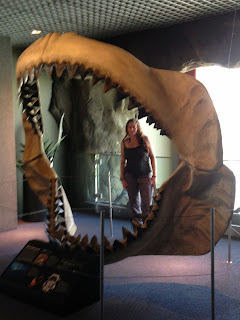 Once the cat drama had subsided I headed to Baltimore to see my sister, who was in town on business. We spent the late morning and early afternoon at the National Aquarium. Seeing all the beautiful reef exhibits just fuels my desire to be where the water is clear for snorkeling. I always thought the water in Miami and the Keys was terrible compared to the Bahamas and Barbados, but compared to the two inches of visibility in the Chesapeake, South Florida water is crystal clear. I remember running from downtown Miami over to Key Biscayne and easily seeing the barracuda hanging out in four to six feet of water. The aquarium is huge and as we went through the Amazon exhibits my sister recounted various fish and other wildlife she'd seen as a child living in South America. Of course, I loved seeing the jellyfish exhibit again. They are such interesting and beautiful creatures. And naturally, we had to take pictures standing in the Megalodon jaws.

One of my big stressors right now is trying to sell my furniture and other belongings. I need to get out of the office I rented; my lease is finally up and I've only had one client in the past year so time to let it go. I also need to gather as much cash as I possibly can if I want to cruise away soon rather than being stuck another year. I haven't managed to get any interest from local friends in buying any of my stuff, so I started putting things on craigslist. Unfortunately, far and away most of the responses are scammers. When someone texts me, when I said to call, and then asks for pictures and the asking price, both of which are in the ad, it's pretty obvious they are scammers. And if not, they are clearly too stupid to bother dealing with. Sigh.

Yesterday new neighbors pulled in two slips over. They apparently only work three weeks a year, for the Annapolis boat show. So, for the next few weeks I'll have liveaboard neighbors again. I hear my main halyard slapping against the mast in the wind and hope they don't hate me already! Guess I better go tie it out before they complain. They've been living aboard for 11 years now and the wife said she's too old to live in a house anymore. Yep, we liveaboards are just cut from a different cloth. 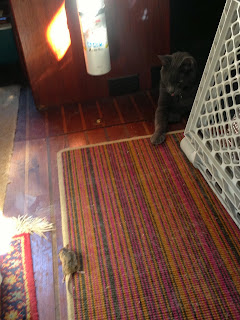 I was catching up on reading when Hunter jumped down into the salon. He stood very still and I had a bad feeling. Yep, a big, juicy mouse in this jaws. He gently set it down. Ick! And not quite dead. Double ick! I scrambled off the couch and put on shoes before he could start eviscerating it next to me. He played with it a bit. He kept talking to me: "Meow-row;" "Look mom, I brought this for you;" "Meow-Row;" "Look mom, I am a mighty warrior." I told him he is a good kitty, a mighty hunter, but could he please stop bringing mice and cicadas inside the boat. Please. Then the crunch, crunch, crunch of little bones! I plugged my ears. Luckily, he grabbed it and jumped back topsides. Unfortunately, he ate half of it on the deck and there it sits, covered up by a blood-soaked paper towel. Ick, ick, ick! This is when I really wish I had a guy to come clean up icky dead things for me. This is when it's hard being a single girl on her boat. I almost hoped the dog would finish it off. I'm going to spare you all photos of the remaining ickiness. But if anyone is volunteering to come clean up the crime scene... I'm not too proud to accept a little help. And I pay in rum.

Lately life also feels like a game of cat and mouse. Constantly chasing bills, stalking a series of goals that always seem shifting, elusive, just out of reach. But like Hunter, I am a mighty warrior. I decided a few years ago that no longer would I be the gazelle in this life. I am the lioness and I am going to catch my dreams.
Posted by Suzy at 1:07 PM