I was tempted to get done up again yesterday on the actual Day of the Dead, a/k/a All Souls' Day. I'm not Catholic, but came very close, and it never hurts to take a day to remember our loved ones who are gone. I told pup dog the story about the last time she saw my father. He had measured out individual ziploc bags of dog food for all her meals on a crazy road trip of me and pup driving alone across the country. On the larger bag he had put all the small ones in he had written a note: "For Buttercup, hand-packed with love by Grampa."

Here is a photo of my Halloween Sugar Skull Bride. Random strangers were coming up and taking photographs. The makeup took three hours and three glasses of wine, (twice I had to scrap it and start over because the white hadn't gone on as smoothly as I wanted), and I only had it on for three hours. The night was pretty much a bust and I never got where I was headed. C'est la vie. 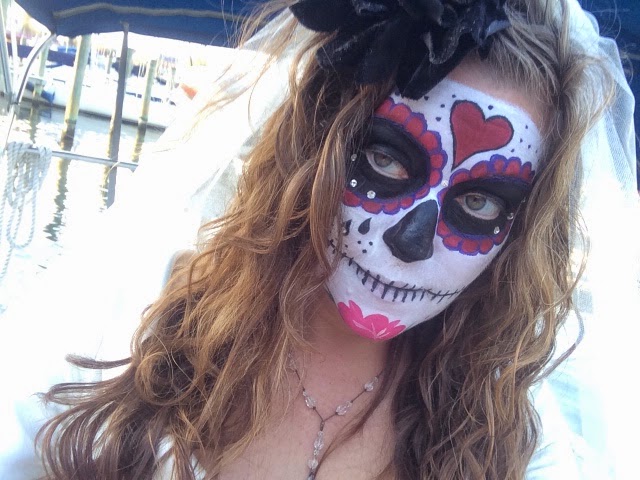 I was trying to get to my local pub, where I probably could have won the costume contest. It should have been easy to make it there by 7pm, I only planned to stop for a quick, cheap, happy hour beer and pizza at Boatyard at 6pm. A friend and her new beau met me there and then my drinking crew got there, two guys I've only known three years but seems like we've known each other forever. Time started slipping away, but I figured we would get out of there soon. Then someone else ordered food and an acquaintance hijacked me on the pretense of introducing me to a friend who is a local attorney. I only left my friends thinking it'd be a quick intro and since I'm always looking for work I just wanted to make the connection. But instead they were trying to fix me up with some guy I wouldn't even be able to recognize if he walked past me right now. Zero chemistry, completely not my type. And I just hate people trying to fix me up. If they knew me at all they would know that. If I'm interested in a guy he'll know it. So I was wishing my friends would come grab me and rescue me from the hijacking but they headed outside to smoke.

It seemed like they'd been gone forever and I worried they'd already headed to the next spot and a busser started clearing all their stuff away. I asked the bartender for my tab, and totally freaked out when I saw it was $60. After paying bills, I only have $50 until my next pay day around the 11th. So my Halloween drinking budget was $30, which was still more than I hoped to spend. A couple beers at the pub is all I really wanted to have since I wanted to get up early to run and didn't want to feel like hell. And since my cheap beer at the pub is $3 a pop, I could pretty easily have a $20 night out. My tab at Boatyard should have been a whopping $8 plus tax, so when I saw this huge tab I started freaking out. The first things I saw were a bunch of beers and one of my friend's margaritas, so I thought the bartender had put my friend's boyfriend's tab on mine. I told the bartender I don't even know the guy. He said it was my friend I had lunch with the other day and he put his stuff on my tab, we're friends, so he put it there. I looked farther down the tab and saw a pizza and shots he'd ordered. The extra beers were likely his, too. I guess they were right outside smoking but when I texted I didn't hear right back from him because he was on the phone with someone. The bartender just kind of shrugged rather than splitting off my stuff and I headed into the head to take a deep breath and get away from everyone. One of the people trying to fix me up came in and over my objection just snatched the tab out of my hand and someone in that group paid it. I didn't want to be some charity case, I just didn't want to be stuck with anyone else's tab since I'm so broke and literally couldn't have paid the whole tab. I always hate having my tab mixed with someone else's. I just want to be able to pay what I owe, not have to hassle with anyone over who owes what, and be able to leave when I want. After putting all that stuff on my tab without my permission and then just shrugging about it, hell will pretty much have to freeze over before I set foot in Boatyard again. I was frantic to get away from the acquaintaces trying to fix me up and wanted to get out of there right then. I should've just waitied, gone to find my friends so they could take care of their portion. But I was all flustered and just freaked out, needlessly. I guess being stuck in this noisy, crowded bar, trying to get away from these people, and then not being able to, being so broke, it just all wound me up into a panic attack. I washed all my makeup off there in the bathroom and rolled straight home to bed. So, Halloween fail.

To make matters worse the acquaintance gave my phone number to the guy he was trying to fix me up with and showed him my boat, so the guy was banging on the hull when I was trying to sleep and came on the boat to drop a note with his number. High on my list of pet peeves is people just "dropping by" my boat. Just text me if you're in the neighborhood. If I'm up for company, I'll respond. I like my privacy aboard. I would never just show up at someone's house banging on the door. Even if I'm home that doesn't mean I want to see anyone. I might be sleeping, taking a shower, on the phone, screwing someone, or just not in the mood for company. I keep odd hours, so one night I might be up until 2am and another night I may go to bed at 8pm. I sound totally anti-social; maybe I am. I just think I have a right to be social on my terms, when and where I feel like it.

The winds howled all night Saturday. I stood on the deck pulling a stern line, leaning back with all my weight, trying to get another inch or two off the dock. I forgot to take my sleeping pills so the wind and banging and rocking kept me coming in and out of sleep. But I worry about being too deeply asleep during a gale. I had a bad feeling the tides would be very, very low from the north winds, but it's only the beginning of November, it wouldn't be too bad, right? Then I accidentally caught a glimpse out a port light in the morning and saw how far below the dock we were. 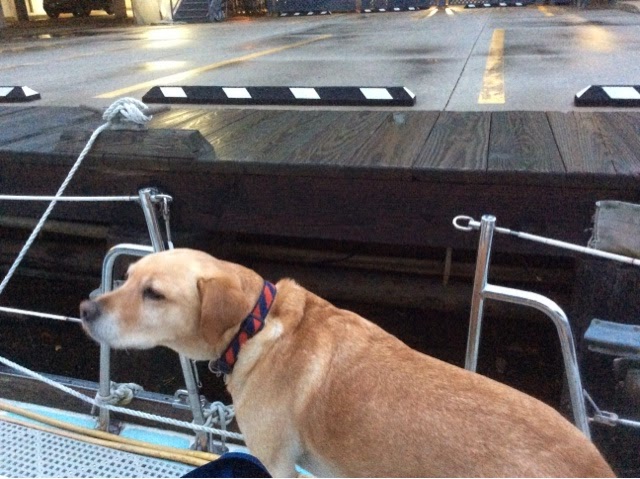 No way I could get off the boat without getting soaked climbing up to the wet dock, so donned my snow pants and foulie jacket. I thought I would have to untie the dog ramp from the deck and run it from the cabin top to the dock for pup dog to make it ashore, but she looked at the dock and looked at me and while I was adjusting lines she just jumped on up. I had to climb up on hands and knees. When we returned from our walk I figured I would have to get the dog ramp because jumping down is definitely scarier than jumping up. But pup looked at it and then looked back at me and then jumped right down. She turned back and gave me a look: "Mom, I got this!" I told her what a good pup she is, so brave. Then she kept climbing back to the side deck as if to help me. I had to sit on the dock, reach my feet down to the toe rail, and then launch myself over. But this was nothing compared to how low it will get and doing it in daylight without snow makes it much easier. Ah, living the dream.

The schlepp into DC for this project is a major drag, very hard on pup, and completely wrecks my running schedule. Gratefully, I managed to knock out 4 miles on Friday, 6 on Saturday, and 14 long, slow, cold, windy miles yesterday. I should have ran that 14-miler two months ago, so I am under major pressure to get my mileage up quickly without getting injured so I can make it through the 50K right before Christmas. I'm really good at procrastinating, but I'm also a machine when I'm down to the wire and something simply must get done. So, we'll be ramping up to 16 and 18, umm, immediately. The good news: I'm not even sore from the 14 yesterday. Everything else may be falling apart, literally and figuratively, but these legs are rock solid!
Posted by Suzy at 8:00 AM