The past few weeks have been hectic. I was gifted a pass one day for the boat show, so I headed to the show to renew my unlimited towing policy with TowBoatUS. Renewing at the show got me a 10% discount, not much perhaps, but every little bit helps these days. I didn't look at boats at the show, and rarely do. Just doesn't interest me. I'm really only there to see the vendor tents. One interesting product I saw was SoftSand, rubber particles for mixing with paint for non-skid decks. The pup doesn't like walking on the decks so I've condsidered doing non-skid paint, but it is often done with sand, which holds heat and can make decks uncomfortably hot if you like to go barefoot. The rubber particles won't have that same effect, so I think they will be a great option. Other than that, the boat show was the same old thing and once you've seen one, you've sort of seen them all. I did buy a whopping two $2 sail ties to add to my small collection. 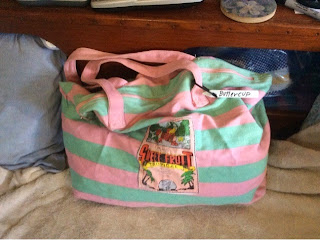 The following weekend the pup dog went to "sleep away camp," or really, went camping with a friend and his daughter, who had been missing the pup dog after having puppy-sat during my trip. I wasn't able to get away to go camping with them, but I packed Buttercup an overnight bag with bowls, toys, food, treats, leashes, a towel, and a snuggle blanket. Yep, I'm a smother-mother. I've been battling a sinus infection or cold off and on since that weekend, so I'm glad pup got to go have fun rather than just hang around with me sick in bed that whole weekend. 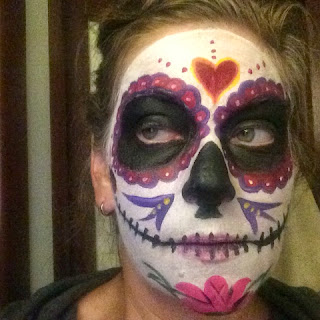 My professional face paint for my halloween makeup arrived. I ordered it from Mehron, which appears to be cruelty free. I'm running short of time to practice, so need to do another practice run tonight, but my first practice run with the face paint went well. I picked up a smaller brush to make the lines across my face for teeth finer, and it should also work well for small dots and other little details. I also have glitter and glue-on rhinestones, which I haven't experimented with yet. I had really hoped to go out in costume tonight to see John Brown's body, one of my fav bands, up in Baltimore. But with no car and little cash, it looks like that isn't happening.

When I did the practice run it was a Friday night and the face paint had arrived that afternoon. I decided to just stay in for the night with a bottle of wine and practice the make-up. I had finished it and was just hanging out on the boat when Max came zooming in and out. He was acting oddly and when I got a closer look I saw he had a mouse in his mouth. While he was on the deck with it I scurried out and closed the hatch so he couldn't take it back inside. While Hunter is a hella mouser, this was Max's first. My baby cat is all grown up! 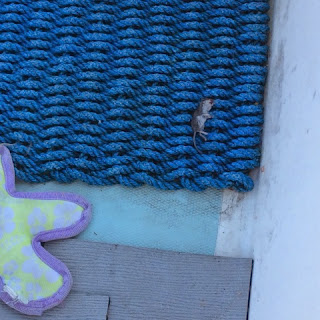 While I was out on deck with a glass of wine and my face all painted some folks visiting town for the boat show walked by. We started chatting and they asked if I'd be willing to take them out for a day sail that Sunday or knew anyone who would. Apparently all the charters around town were already booked; there are surprisingly few out there, too. I explained that I really couldn't do it (my boat's too much of a wreck right now and I don't have a captain's license to be able to do it legally). But I suggested they wander down to Davis' and ask around. They convinced me to head there with them for a drink; thanks and cheers Mark and Kim! I guess they'll have a good boat show story about some goofy girl in her Halloween make-up, or maybe everyone will just think they had too many Painkillers! 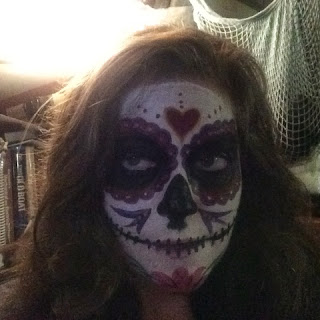 So I rolled on over to the pub in my wild sugar skull make-up. People didn't even recognize me until they saw my insanely long hair. I tried to round up someone to take Mark and Kim sailing, but no luck. After they headed out I chatted for a long time with a guy with the most adorable dimples you've ever seen. No floppy hair and a good 10-15 years older than my usual, but he was fun to talk with and wasn't fazed by my ghoulish appearance. But one minute he was showing me photos of his daughters and the next he just disappeared.

That left me sitting at the bar next to a creepy guy trying to pick me up. He asked me what I was doing later. I looked at the clock: 1:30AM; it is later I explained, and I would be heading home to get a good night's sleep. Then he just straight out propositioned me and said he'd "make love to my dead face." Eeeks. Check please! Drunk as he was I guess he felt that might have been awkward (ya think?) but I politely thanked him for the offer, and said no thanks, I'd pass. Everyone wants to be wanted. It's flattering. But there comes a point when it is pretty tiring to feel like all anyone, everyone, wants is to get in your pants. But I have to admit, that make-up is pretty sexy, right? Sigh.

It had been a year since I had had a haircut and I needed to find a new stylist since my beloved one recently passed away. I did lots of research about DevaCurl and found a stylist for a special curl-friendly DevaCut. Dawn at Morgan Gerard Salon in Annapolis was great. Before and after photos below. My hair feels so much healthier with all that old growth gone. I love the DevaCurl products, but will have to wait until next month for the cash to buy them. So, making due for now, and very happy with the cut.

Although I loved having really long hair it was too much. The ends were dry and frazzled from having been colored (currently it is totally natural), blown dry, and flat-ironed for years. It would get caught on the Velcro on my foulies (probably still will, but not quite as much). My arms would get tired doing my beautiful french braids. It was time to let go. I liked the long mermaid hair, but the length and weight were weighing the curls down and I was finally ready to embrace them!

I was out with a friend Saturday night, after having gotten up early to tend bar at an event all day. I was exhausted and figured it'd be an early night so I could get up in the morning and knock out a needed long run. But just when my friend was heading out, I ended up running into the guy with the cute dimples. Let's just remember that my life has been a series of tragically bad decisions, generally about men and career. Thus, I have no guy and no career. (But more importantly, I have me, my pack, and my freedom.)

Not that this was a bad decision on that level. But I really have to remember that no guy, absolutely no guy, is worth missing a long run for or being a bad mom to my furry kids over. But I left the hatch open and the cats running loose for around 11 hours because I didn't get back to my boat until almost 5:00AM. Which is when I needed to be waking up to knock out a 14 mile run that has been pushed back and pushed back on my schedule to the point of being seriously behind on my training for a 50K that is just over 7 weeks away.  I really consider my body a VIP room and not just everyone gets in, but every once in a while curiosity gets the better of me and I can't help myself. I knew at the time that I should have headed home, but we all have moments of weakness and it was nice to hang out with a smart guy for a change. (The boy toy who fell overboard was painfully dumb.) But if it's going to be meaningless, then I'd rather they were young and dumb. Maybe it won't end up having been totally meaningless, I enjoyed his smile and his company, but I'm not holding my breath.
I make a point of not getting involved with anyone I meet at my local pub because it's my place that I just want to feel at ease. I did meet the floppy-haired sailor there two years ago, but he was the only one, and I knew from the outset that he was just passing through and wouldn't be a fixture there. I should have followed my own advice because running into the guy with the dimples at the pub was exactly that uncomfortable situation I wanted to avoid in my local watering hole. Instead of picking up where we left off after a long night and a beautiful dinghy ride under the stars at 4:30AM, there was that awkward distance that seems to nullify and debase the intimacy and closeness I felt, reveals that they were just an illusion in a passing moment of passion. That feeling is also so sad, knowing that I sell myself short. Any Homeland fans out there? Saul has a great line telling Carrie "You're the smartest and the dumbest person I know." Yep, that's me.

I deserve someone who is crazy about me. I definitely don't want a guy whose world revolves around me; I've been there, done that, and can't handle the pressure to be responsible for someone else's happiness. But I do deserve someone whose eyes light up when he sees me. Someone who appreciates that I am bat-shit crazy, because it may be a wild ride, but it will never be dull. Someone who doesn't need me to lift him up, and who doesn't pull me down. Two whole, independent people who are just better together. Someday I will find that.

A special shout out to fellow mermaid, Julia. Thanks for reading and thanks for your kind words. Don't let them get you down!
Posted by Suzy at 10:56 PM