With no particular reason to head south or budget to do so, I needed to find new digs in the area. Since I learned too late that my last marina was too shallow and too boisterous for me, I have repeatedly sworn not to sign another annual contract. I figured I would find transient slips, move every few months, and just see where things go. As usual, my life is in flux, and I’m just fine with that. What I have never been good at is being trapped, tied down, locked into anything.

My understanding was that my slip had been leased out as of March 1, so I was feeling under the gun to find a new slip and get moved. One key problem I faced was most of Back Creek was frozen. Every sunny or warmish day I would stand on the bow staring at the ice and praying for enough of it to melt to let me out.

I spoke with the dock manager at a sought-after marina on the Spa Creek side of Eastport hoping to find a slip for March and perhaps April. I dropped by a couple of days later to check things out… which slips might be available, the laundry and bathhouse facilities, and find out details about what would be included in the rate. To my surprise, I was offered an annual liveaboard slip, for which there is often a lengthy waiting list. I was caught off-guard by that choice, and had to give it some thought. I crunched the numbers, mulled it over a bit, and knew it was the right thing to do. The problem: the entire annual payment is due up front and I live hand-to-mouth even in the best of times. I managed to rustle up a loan for the slip, and then anxiously awaited the arrival of the lease in the mail. Once everything was signed and official, I celebrated (duh!) and then I studied the upcoming weather to find the likeliest date the creeks would be thawed so that I could move.

Four or five relatively warm days were coming, culminating this past Sunday. Friday I filled the water tank. The ice was looking softer and receding, but still impassable. I also urgently needed the pump out boat to be able to get to me because the tank was completely full. Thankfully they were able to make it around the remaining ice so I had the boat pumped out and flirted with the hottie pump out guy I’m still crushing on. (Saw him briefly at the pub on Friday night, but he otherwise remains elusive despite regular texting for several weeks. Sigh. What's a mermaid gotta do to catch this one?!) Saturday I also had a second ammeter installed (love it!), finally got the propane line routed off the aft rail (yay!), and got a lesson on changing the oil and filters on my Perkins 4-108 diesel engine (double yay!). So, after a highly productive Saturday, Sunday was moving day. 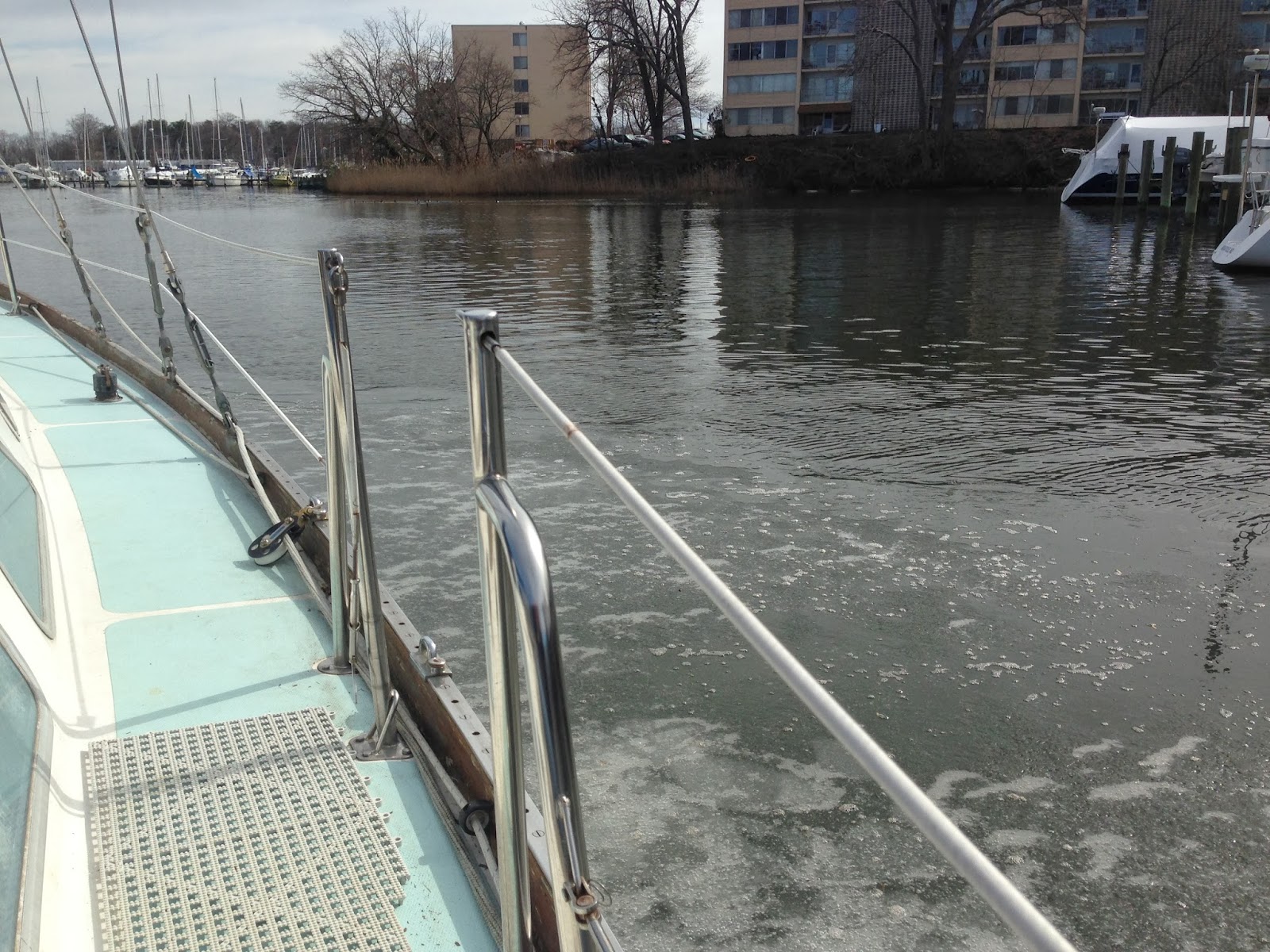 A liveaboard friend offered to help me move the boat over to the new marina. I know I could handle her by myself, but it never hurts to have another sets of hands to assist when coming into a new marina, where I don’t know the quirks as to wind, current, and depth. The ice had floated further out into the cove and we dragged some alongside as we slowly crept along. Once I was past the ice I tried to throttle up, but the shifter didn’t want to move up any further. The engine was only hitting 700 rpm. We kept puttering along slowly, but I was surprised and concerned about the throttle not working since I hadn’t had any problems with the engine the day prior as we changed the oil, oil filter, and Racor fuel filter. 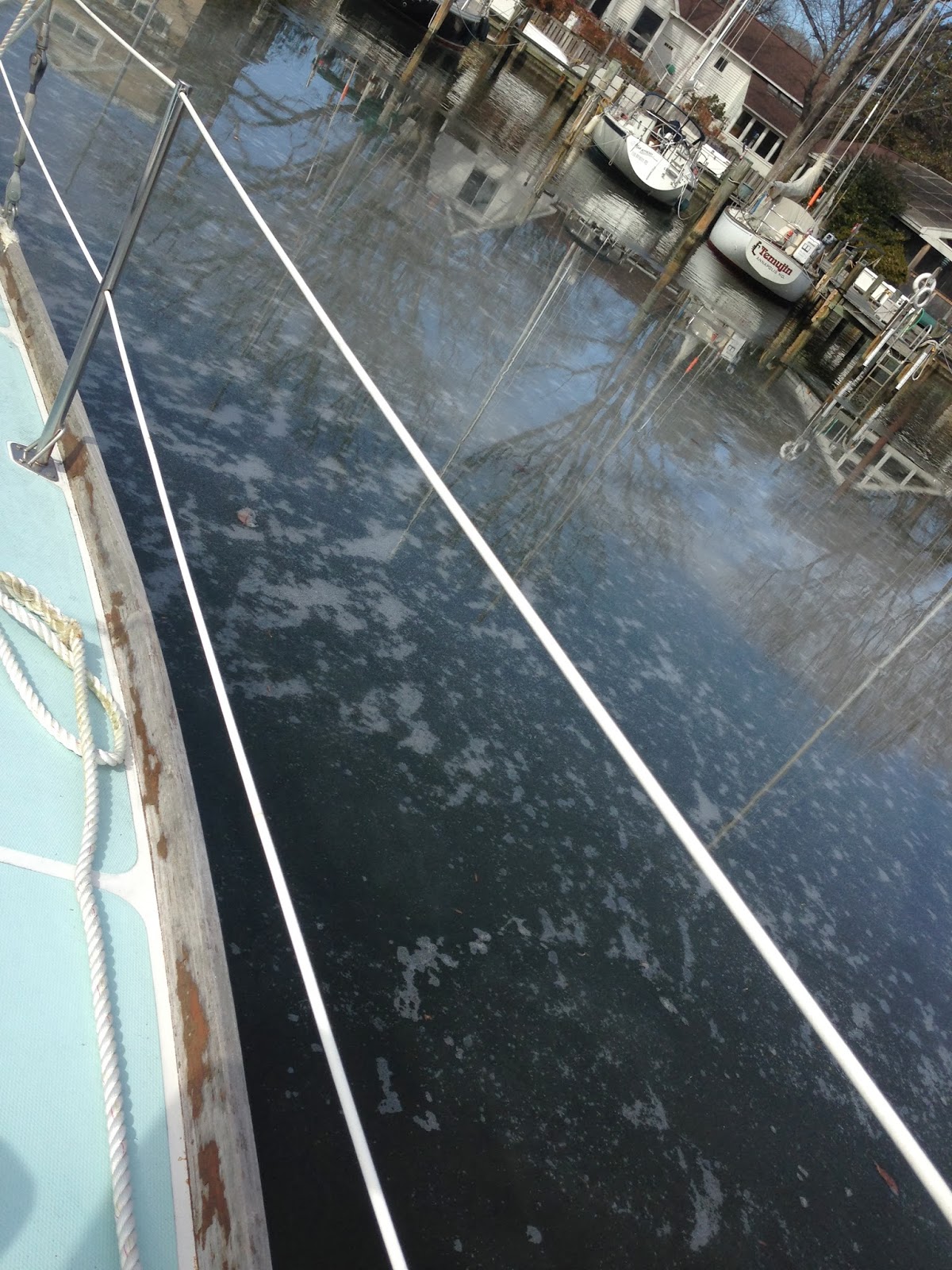 My friend and I were brainstorming what the problem might be and I was studying the instrument panel, when I took a green day mark a couple feet to the wrong side. I promptly went from 8 feet of water to 4 and ran aground for my first time. I could have easily backed right off of the shoal… if I had any throttle. I hit the BoatUS app on my phone and it automatically sent my GPS coordinates to the tow service. A boat went by and my friend kept signaling to them that it wasn’t his fault, it was all me. Ha! Yep, it was my bad. It was a beautiful sunny day, I wasn’t in any particular rush, and we were just nudged into mud, so I didn’t see any reason to worry. Everyone runs aground; that’s just part of boating. The wind started kicking up and blew the bow off 90 degrees. At the same time a gentle wake came and lifted us just enough. I saw the depth sounder go from 3 feet to 5 to 7 and quickly put her in reverse. Even if I couldn’t throttle up, I wanted to at least try to back into the channel. And just like that I backed her up, did a 360, and headed out. I let the tow captain know I was no longer aground but opted to go ahead with a tow due to my lack of maneuverability from the impaired throttle. The wind on the Severn and on Spa Creek was much friskier than on Back Creek. There were also gobs of little sailboats out for the Sunday afternoon frostbite races. Because I’d be motoring, they would have right-of-way and would be zig-zagging all over right where I needed to go. But if I was under tow… well, they would all have to give way to me. Knowing your COLREGS comes in handy! Naturally, it was the same tow captain who towed me last September and then towed a friend’s boat when I was aboard helping him move it for a haul out. I’ll admit it’s a little embarrassing to be on a first-name basis with the local tow captain. C’est la vie. 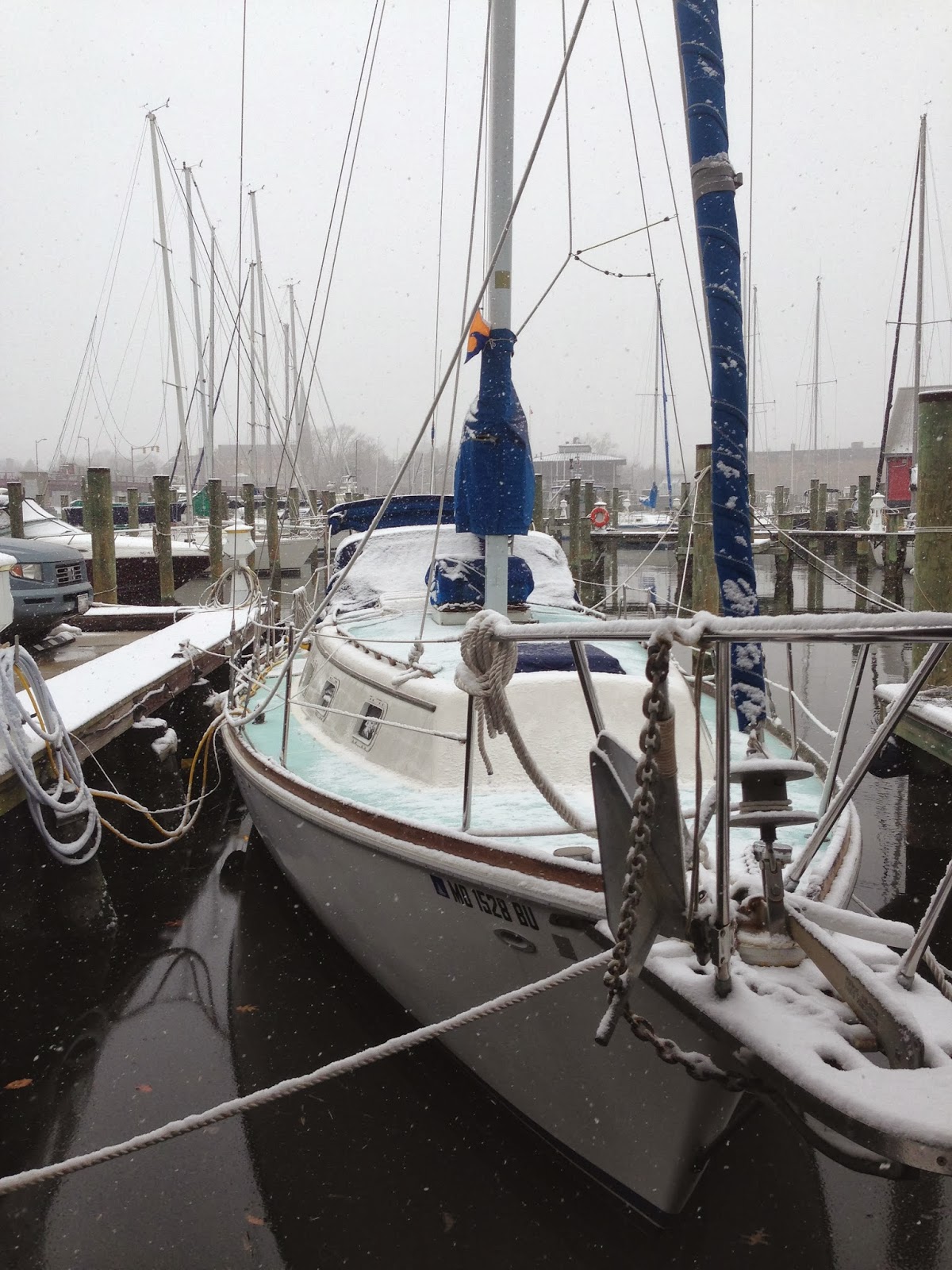 I got tucked into the new slip. I had planned to dock stern-to but the neighboring liveaboard warned that the slip would get shallow at the far end and that gawkers in the spring and summer would be able to look right down into my boat if I didn’t come bow in. I hadn’t considered the latter issue, but the new marina can definitely have a fishbowl feel, so I’m glad I took his advice. Pup dog is having to adjust to jumping from the deck to the dock at the boarding gate amidships, rather than using her ramp, but she’s been a trooper and adapting with less fuss than I expected. The cats are peeved that I haven’t let them outside yet, but I’m scared they will get lost or hurt in this much more commercial marina with a large parking garage. (It doesn’t help that this morning my neighbor said there has been a dead cat floating around the marina since January and to let him know if I see it so he can fish it out. He said it’s black; I would’ve thought it was Max and freaked out. The whole thing makes me sad.)

So, how are the new digs? Well, let me just say I love bottomless hot water even more than bottomless mimosas! At the old spot there was 15 minutes of hot water, then it went completely cold. I have long hair and long legs, so I could never both shampoo my hair and shave my legs in the same shower at the old marina. And after a run in the frigid cold I would need 15 minutes of hot water just to be able to feel my fingers and toes again. So, I am loving having all the hot water I want, with great water pressure, and facilities that are cleaned daily—by someone other than me! There are two shower stalls, which are separate from the two bathroom stalls, as well as two sinks with shelves, electric outlets, and a courtesy hair dryer. So, yes, I’m feeling I made a serious upgrade.

I also have laundry at the new marina so now I can toss in a load whenever rather than having to drive to a laundromat and pay a lot more than the marina charges. I also have covered, card-key-access parking and generally get a spot right next to my slip. The dock management team are very nice and gave me a welcome bag with a t-shirt, floating key chains, wine key, baseball hat, bathhouse key, and my parking card. Another, and likely the biggest, benefit of the new marina: water under my keel so I can go sailing! I’m even closer to my local haunts, so that’s nice, too.

Oh, and did I mention that ELECTRICITY IS INCLUDED?! So, although I’m paying a mere $17 more a month at the new marina than I was before, I’m actually saving at least $100 a month because I don’t have to stress about whatever mysterious astronomical electrical bill will arrive every quarter, or randomly a month later. My electric had averaged about $85 per month all year until this winter. The bill for the last four months: $615! Since I was freezing my ass off on the boat and trying to run the heat as little as possible, I can only assume I am being charged for the ice eaters that benefited all the boats and the docks. Very, very glad I won’t have to worry about that anymore.

More later about the engine and such, since the mechanical matters deserve their own post. But really pleased to be moved to my new spot. Many thanks to everyone who helped me get her ready and be able to move into our new slip. I'm very hopeful we'll be happy there and that we have fair winds ahead.