down the lazarette we go 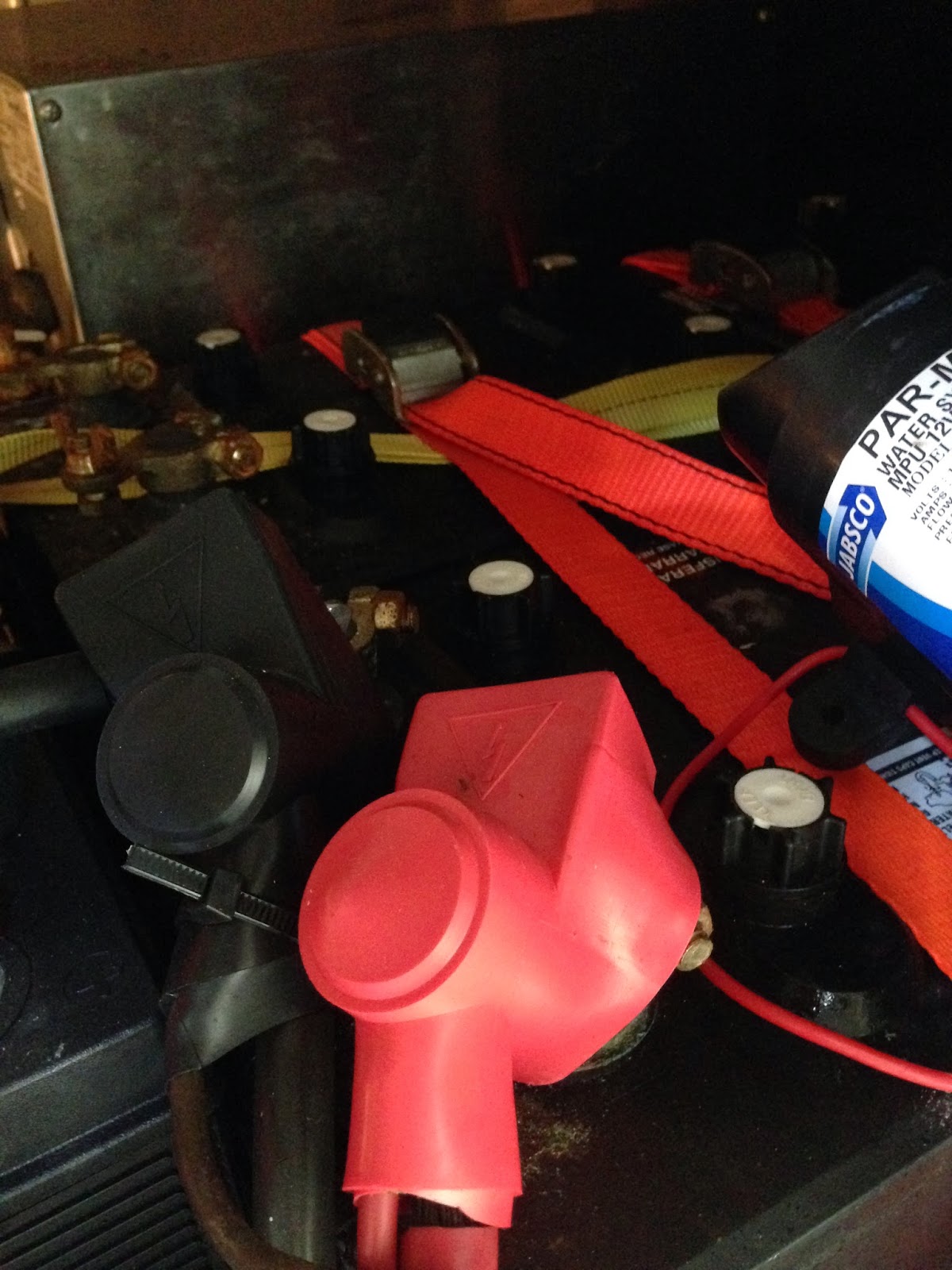 I'm rather independent and like to do things myself. However, we don't just come into the world knowing how to do everything. I didn't happen to grow up learning to fix cars or build things. Thus, I often find myself not knowing how to do some simple repair and maintenance tasks that guys just take for granted. I wonder how they would feel if I talked to them like helpless little girls because they don't know their way around a kitchen. Anyway... for several months I have been begging people to come show me how to water the battery on the boat. At this point the water level was probably so low that permanent damage has been done. But I'm facing the reality that even when I have cash in hand to pay people to help me with my boat, the only person I can rely on to get anything done aboard is me.

I did some research online, put on my goofy headlamp, and started pulling everything out of the port lazarette. The single biggest problem with the design of my boat is the terrible engine room access. To get to the engine, batteries, and water pump, one has to climb down one of the cockpit storage lockers, which means removing everything stored in them first. It's very difficult to reach things toward the bottom of the locker but there were various items I didn't want to step on. I was laying in the cockpit hanging myself down as far as possible without crashing in, and pulled as much out as possible. I tucked a screwdriver and wrench in my pocket just in case and set distilled water and a small measuring cup above the lazarette. 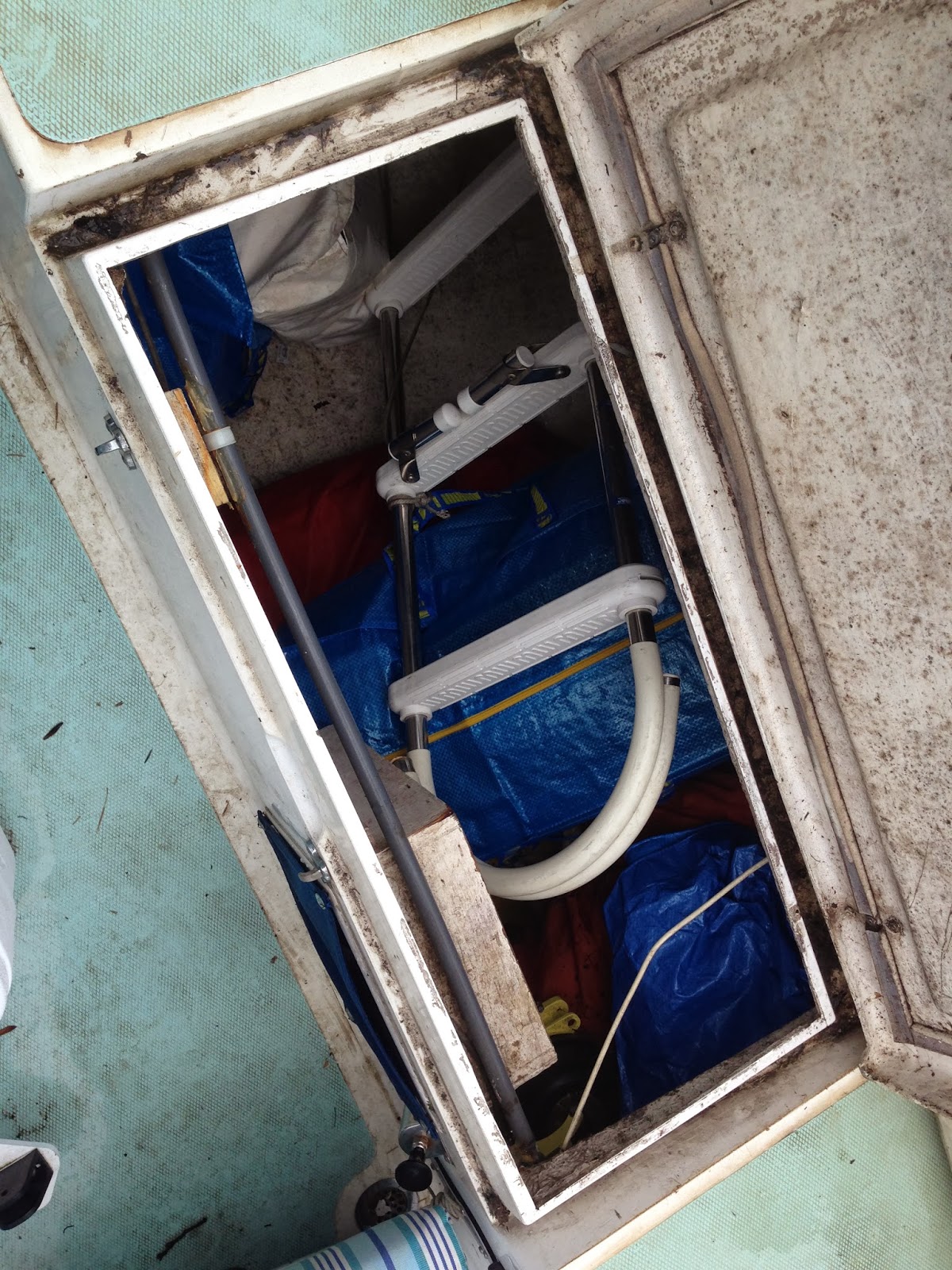 Climbing in and out of the lockers is very difficult. The opening is long but narrow, so my hips won't fit going the direction I want. The locker is very deep, so my feet won't reach the bottom if I'm sitting on the edge of the opening trying to hop down. The sides of the locker are very slippery with condensation. Once I was in and organizing, I knew it would be much easier to have another set of hands to hand me things so I wouldn't have to keep trying to climb in and out. I texted three different guys asking for some quick help, but it was a newly-liveaboard gal on the other side of Eastport who came through. Everything about sailboats is new to her, but I assured her I just needed someone to be able to hand me things and rescue me if I got stuck in the lazarette. As I was pulling stuff out of the lockers and trying to reorganize and store items I found my sea anchor. I don't plan on seeking out the weather that would require them, but I am glad a prior owner invested in a storm sail and sea anchor.

I got things cleared out and started taking a look at the battery. For some reason the water pump is on top of the batteries. That doesn't seem like a good place for it, but there was very little slack in the hoses to move it around. As I tried to prop it up more against the wall, all of a sudden the pump started running. I must have jiggled a hose clamp loose. I started yelling at my friend to run down to the breaker panel and switch the pump off. I was worried the hose would come loose and water would be spraying everywhere as I sat there next to the batteries and battery charger. Of course there are probably 40 or more switches on the panel so I'm yelling to her that it's the far right row, third from the bottom. Once it was off, I tightened up the clamps on each hose. I still need to investigate the leak between the pump and the water heater, but getting to that spot in the engine room will be a major contortionist act for another day. Since the water in the line to the pump has frozen a few times this winter--not good, I know--I relocated one of the 60 watt work lights from the engine block over to the pump, where it was last winter. That should make a big difference when the next cold snap hits, probably next week.

On to the battery. I suspected that the little black and white knobs (shown in the photo at top) were where I needed to pour the water, but I wasn't certain. I also noticed writing on them. "Keep" and then something I couldn't read. I was worried it would say "closed" or "shut." I took a close-up photo since there was no way to get my head in close enough and saw it said "keep tight." I messaged a photo of the knobs to a friend asking if these were what I needed to remove and how much water to add. Although he's sailed off to South Florida, I was lucky he was online to help me troubleshoot; thanks, Phil! I slowly poured distilled water into four of the six little ports; two were just too far for me to reach without better lighting and a turkey baster. Even using a mirror it was too difficult to see the water level, but I wanted to be careful not to overfill the cells and have electrolyte leak out. Even if they needed a little more water, they are certainly better off than they were and I'll just have to make it a quarterly chore to climb down and water the battery.


Once the battery task was done, it was on to the starboard locker. It was full of loose PFDs, random stuff, and two big, heavy sail bags. Both sails are just old mainsails. I'm probably due for some new sails, but since that's likely going to run about $5,000 I don't see it happening any time soon. The old back-ups, however, will likely be turned into harbor shades or other sewing projects. But now for, I needed to get them out of the way of the engine room access. There's no getting around filling these lockers to the brim; I absolutely need the storage space. I sure wish the design had made them internal quarter berths, but I've got to work with what I've got. Therefore, I'm trying to at least consolidate loose items into bags and bins so that I only have to pull 5 big things out of the locker, instead of 20 little things, every time I need to get to the engine room. It sucks having to store sails in these lockers, where they are exposed to condensation and may get moldy, but there simply isn't any space inside to store them... I've still got a car full of stuff and a few items in storage that have to find a place aboard... it's a process, not an easy one, but worth it in the end. Despite all the challenges, I really couldn't imagine not living aboard.