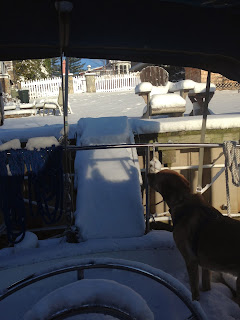 Winter wonderland snowy scenes can be so peaceful and beautiful, but I enjoy snow a little less now that I'm aboard. Snow is certainly better than ice, and the crisp brightness of snow is more cheery than the dreariness of rain. But almost 6 inches of snow overnight definitely complicates life afloat. Gratefully, this snow was light, fluffy, and dry. Although that means it blows easily (dangerous when driving), it also means that it was easier to clear off the finger pier with a deck brush and doesn't weigh the boat down as much. (Too much heavy snow on the decks can weigh a boat down enough to put normally above-the-waterline through hulls below the waterline and sink a boat.)


When we got up in the morning after the snow storm, I was expecting only a few inches. Pup ran over to her ramp and kept looking at me to hurry up and clear it off. I grabbed the deck brush and pushed the snow off into the water for her. 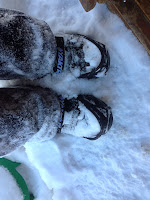 I'm glad I had hung my Yaktrax right by the door and remembered to put them on. They made walking down the pier feel so much safer. I bought them a few years ago for running in snow and ice, and they work great. It just never occurred to me to use them last year on my boots when facing icy piers. Today I'll swap them onto my running shoes for a five-miler and then put them back on my winter boots until the snow melts in the next couple days (we're supposed to get freezing rain tomorrow, oh joy). Pup would probably like some boots of her own. I generally think dog shoes and clothes are silly, but she gets clumps of snow stuck between her pads and then starts hopping with her paw in the air until I come clear the obstruction for her. After getting my jeans covered with snow out walking pup (you can see how deep the snow got from the adjacent photo) and with salt when getting on and off the boat, I pulled out my snowboarding shells and zipped them over my pants when I went back out last night. They may look like puffy clown pants, but they keep me dry. 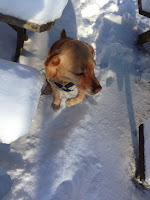 There was ice on the surface of the water around the boat, so after brushing the snow off the pier and putting down ice melt salt, I flipped on the "ice eater" while I took a shower. An ice eater is a propeller than churns up the water, breaking up ice and preventing it from forming by keeping water circulating. The marina owner put a few in for the winter and one is next to my boat. In the first photo below you can see a fountain of water next to my boat from the ice eater. One of the photos below shows a large area of ice floating just off the bow. The ice is more likely to form in the slips and closest to the bulkhead, where the water is shallower and gets less tidal and wind circulation. So, here are some photos; sorry, no palm trees... yet!

Labels: liveaboard, pets aboard, winter aboard