I bought some dry erase boards in hopes of mounting them and using them to help stay organized and on top of things. Naturally, the one that I mounted promptly fell off the wall in less than a day. One laid on top of the pile of crazy consuming the nav desk and said "Get your space organized and zen and your mind will follow." Guests aboard looked at it, looked at the crazy piles of stuff everywhere, and laughed. 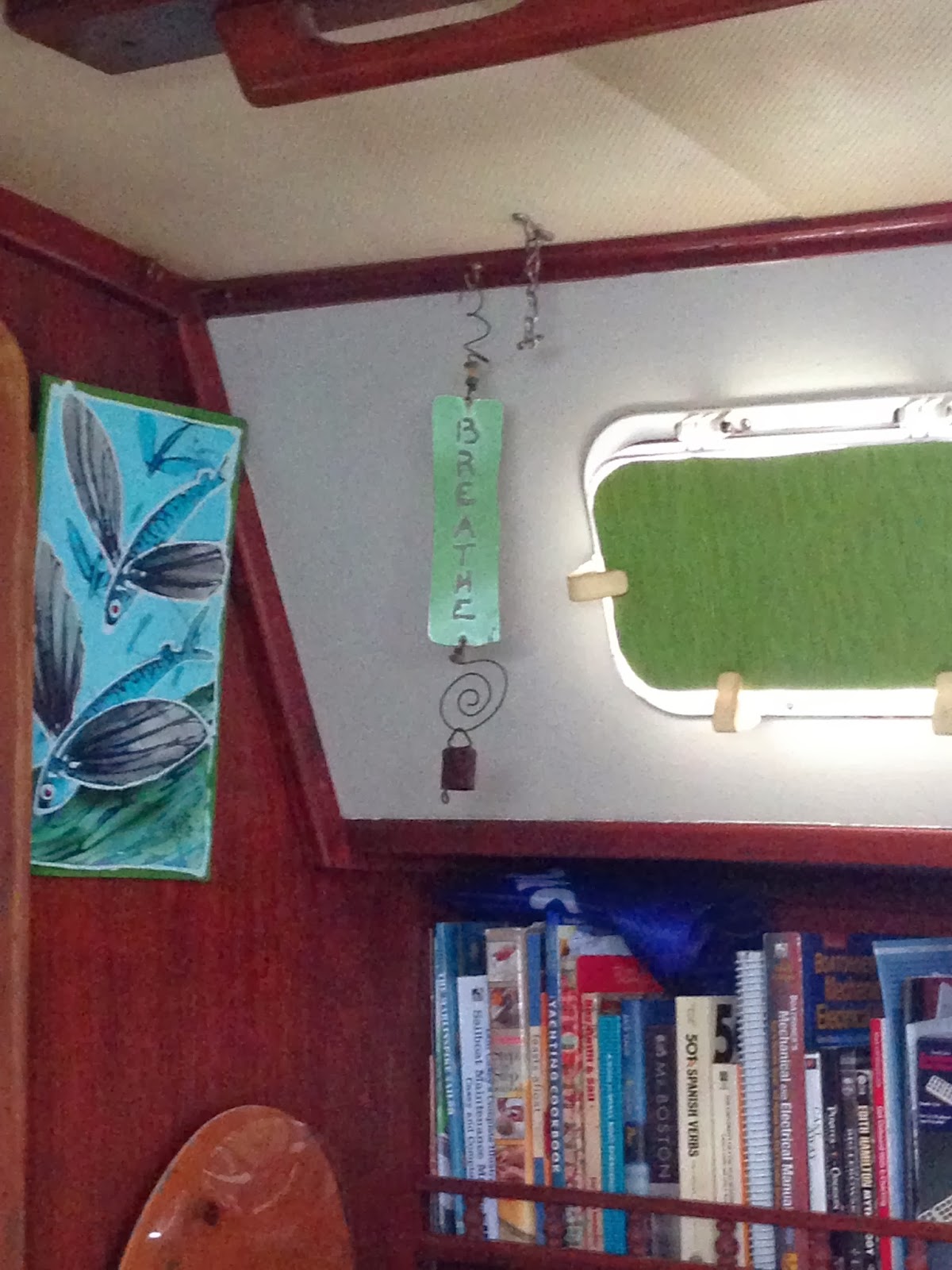 But your space and your insides do seem to reflect and influence each other. I aspire to make the boat clutter-free, with nice matching cushions and such. I had bought cotton net bags to hang for storage and after initially buying a set of multiple colors decided I should go with all natural off-white ones so it doesn't look like some Deadhead rainbow inside the boat. But the reality is that the colored ones are me and the plain dull ones are what I aspire to, but will never be. Similarly, wind chimes on a boat are nutty and mine are very hippy-dippy. I have this theoretical vision of the boat without them, just clean lines, dull and "yachty," but I simply couldn't do it. I have to have my wind chimes that say "breathe" and "namaste" with a simple bell beneath them. Yes, I'll have to toss them in a drawer when sailing, but the little tchotchkes make me feel at home, they say something to me or remind me of some trip or time in my life that I'm not ready to forget. I know they are just stuff, just things, but I've lost, sold, and given up so much, I can't quite let go of the little I have left.


There is still more to be done and it will always be a work in progress, but here are some "before" and "after" shots of the cabin. Yeah, don't judge me; I'm doing the best I can. 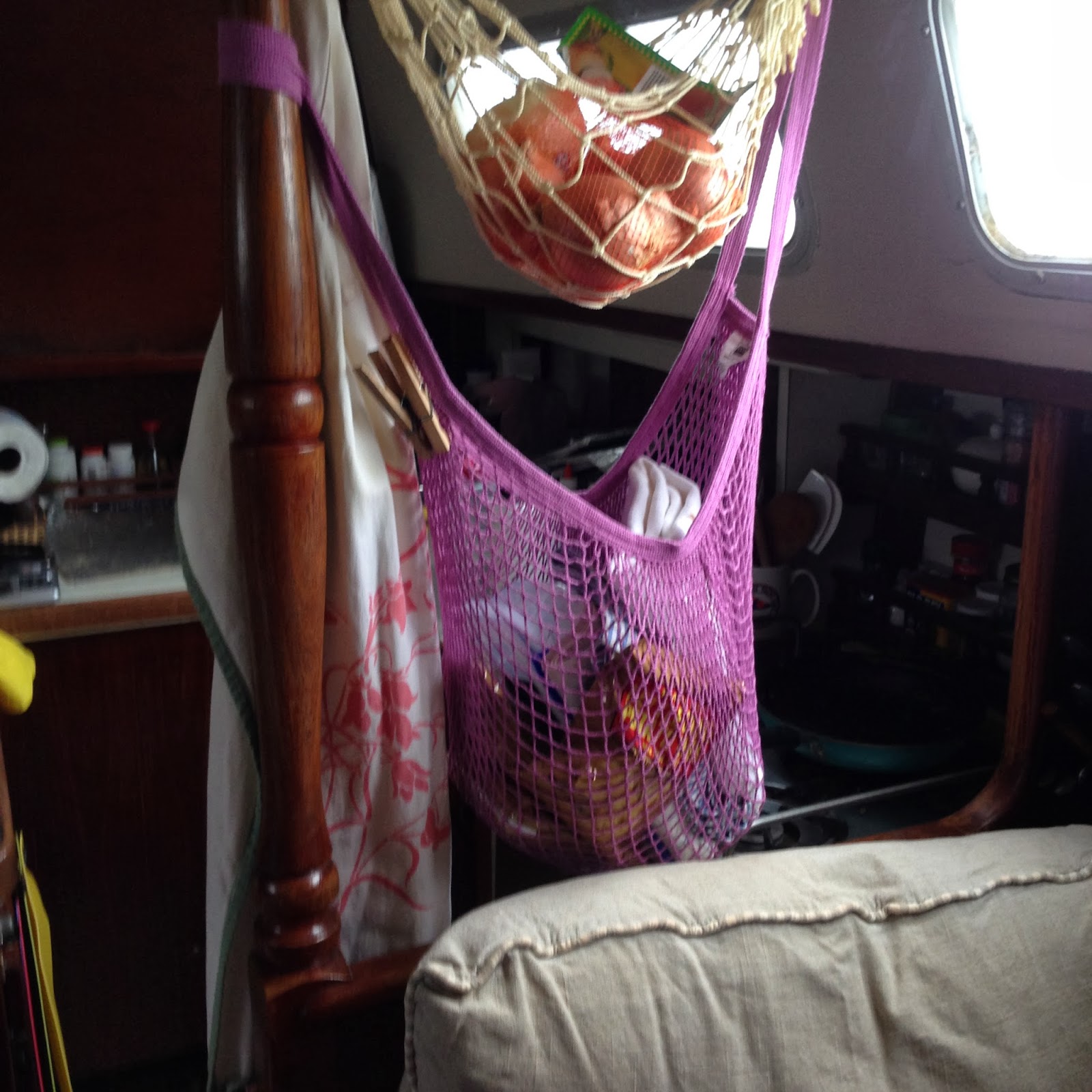 The galley is still a work in progress, and let's just not talk about the nav desk yet. That's on the "to do" list for later today... or tomorrow. The real "project" aside from cleaning and organizing was painting the cabin. The painted area had been horribly moldy when I bought the boat. Although the mold has long been dealt with, the black stains left behind were not going to come out. I bought some anti-mold paint and had it tinted. The first coat came out bright white rather than the soft cream I was going for. It had this stark "production boat" feel I couldn't live with. The light color also made the nice headliner, which is a bisque color, seem dingy. 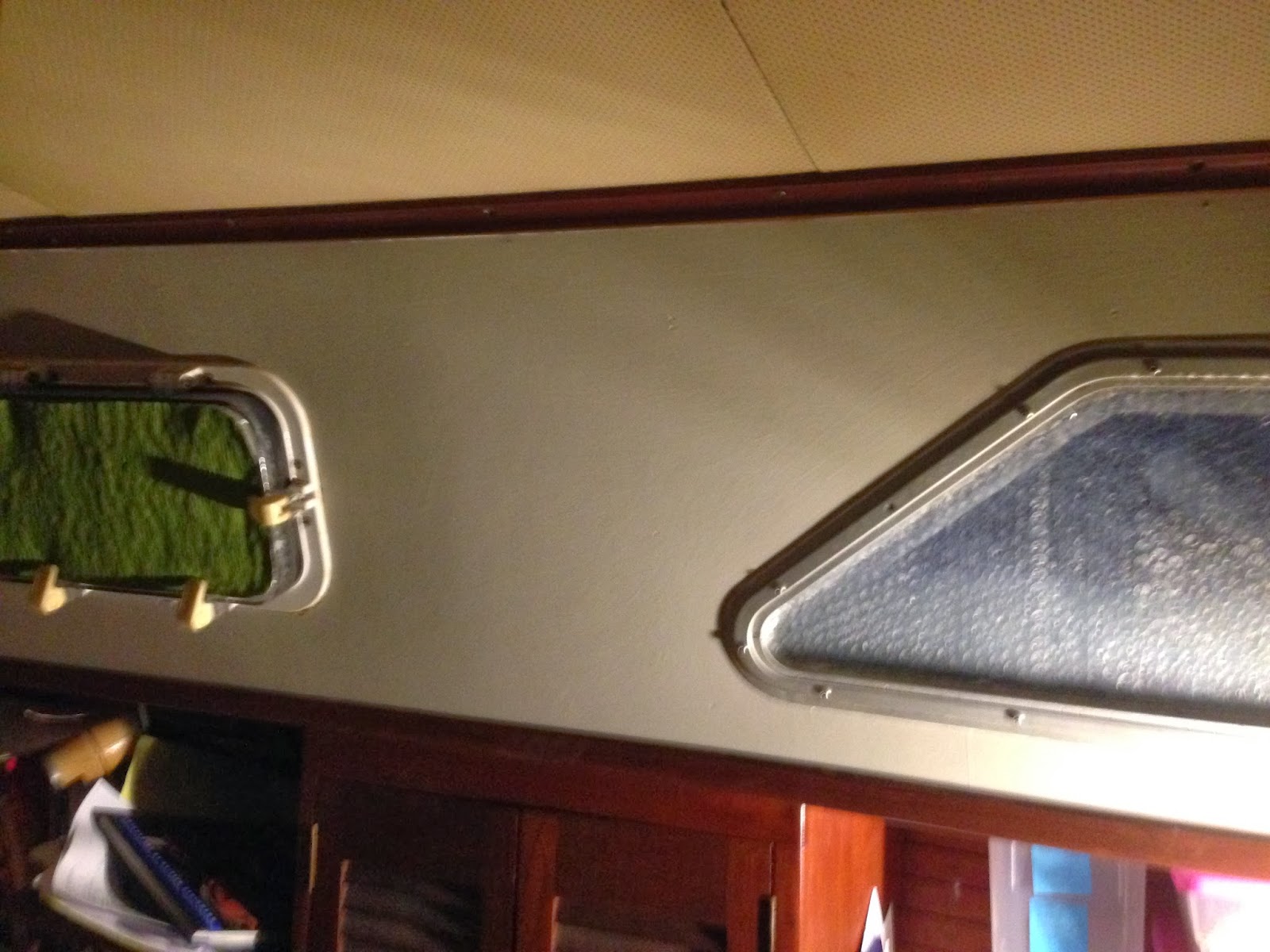 I set aside enough of the original color to do a base coat on the other side so that both sides would match and then took the 3/4 of a quart back to the hardware store to see if they could re-tint it for me. They had to experiment and just sort of make up a color, but it worked. It's not a shade I would've originally chosen but I actually love it. It's sort of a clay color; not quite tan, not quite gray, with a hint of green. It definitely makes the cabin feel warmer and looks much classier than the shabby mold-stained walls I had before. I spent a few hours cursing prior owners for the tacky rope light and gazillion screws they put in the walls to mount it that I had to remove before I could clean and paint. My plan is to run a piece of line where the rope light had been, using some of the gazillion holes already drilled there, so I can hang the net bags between port lights for more storage space for small, lightweight things like hats, gloves, and sunglasses. We'll see; these ideas usually take a few iterations of brainstorming and tweaking to get worked out. I also took some natural-colored cotton fabric and spray-glued it to the Reflectix "curtains" in the larger windows that don't open. It's nice not to have all that shiny silver everywhere making the boat look like a space ship. However, the mast still looks like a big shiny silver disco pole... for now. The cove I'm in, and from the looks of it all the way across Back Creek, is frozen over and covered with snow on top of the ice. Can I just say I'm ready for spring now? The water pump keeps freezing up, so I haven't had running water aboard for a couple of days. I keep flipping on the water heater trying to generate enough heat in that section of the engine room to thaw the line, but it's getting pretty frustrating. Both sinks are full of dishes and taking them ashore will be a total pain in the ass, but likely the only option at this point. The few days of warmer weather can't arrive soon enough. Last week we had two dangerous winter liveaboard incidents here. First, a liveaboard downtown slipped on his icy deck and fell in the water; luckily other liveaboards heard the splash and, together with the fire department, rescued him. Second, two boats in Eastport burned to the waterline and were destroyed; luckily no one was aboard either at the time. These are things my nightmares are often made of nowadays.


I put silicone at the area around a shroud that had been the apparent source of a leak. Unfortunately, that isn't solving the problem. I think melting snow and ice are now getting through from underneath the toe rail. Another Gulfstar 37 owner is solving this problem by removing the toe rail. The replacement toe rail has breaks at each shroud, so there is no way for water to sneak under the toe rail at the chain plates. A very nice solution, but I'm concerned about how costly that change will be. 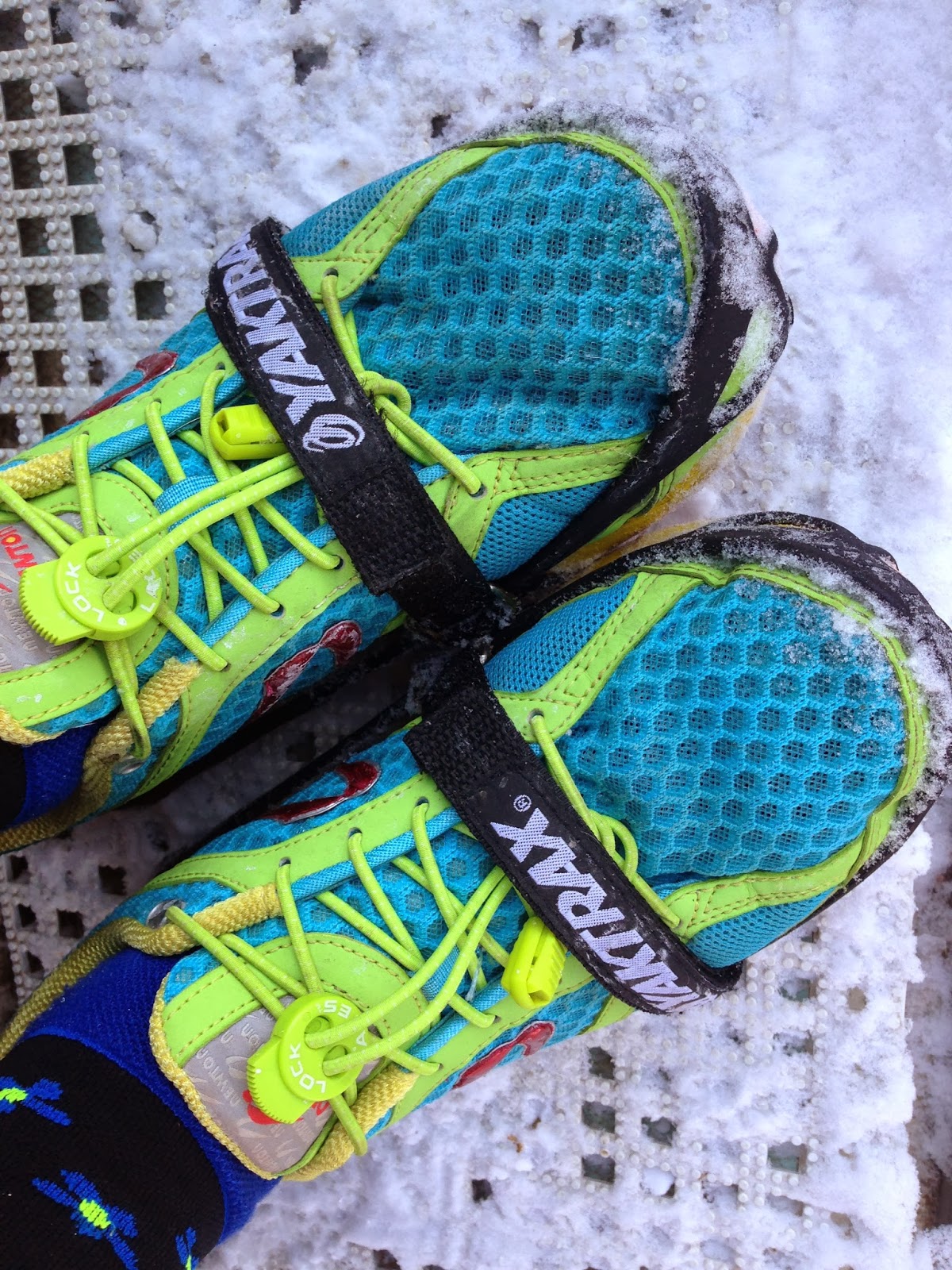 I missed a week of running with all the snow and bitter cold, but all that cleaning, organizing, and painting was still a decent workout. This week we're back on track and pup dog was a trooper running six miles in the bitter cold with me. I had the benefit of Yaktrax but we had to stop frequently to pull snow and salt from between pup's pads. It feels great to be running again and although the dieting is tough right now, I know it won't be as hard once my mileage is back up and my metabolism is faster.


A few weeks ago I had called the pump out boat but they were frozen in. The following Saturday they were socked in with fog. So the next Saturday I tried again. The tank wasn't yet full, but another couple weeks and I'd be in a jam. But I was in luck, it was actually a relatively nice and warm day for this winter full of polar vortexes and such. When the boat pulled up I was surprised to see the cute floppy-haired guy who'd been running the boat over the summer; I hadn't seen him since fall arrived. It's hard to explain or pin down why, but when I see him I perk up. I'm sure you've had that happen; someone who just makes your eyes light up, your posture straighten, a smile spread across your face. That's what I think of as the power of pheromones; mother nature just saying there is chemistry there. To me, it's an absolutely necessary, but not sufficient, condition to being with someone. If you don't have that spark right off, it won't ever come. I could definitely be wrong, but I feel like the chemistry is mutual.


He asked about the pup dog, which was sweet. I told him I was planning on leaving soon to head south, and he said we had to stop talking about getting a drink at the pub and make it happen. I scurried below to fetch a card and gave it to him. Time to walk the talk if he's for real. The older guy on the pump out boat was probably rolling his eyes and looking at his watch as we chatted away while vacuuming the shit out of the boat. A handful of hours later he texted me. But it's been 10+ days of texting back and forth and...  that's it. I don't want to play games but I also don't want to scare him off--not everyone can handle my bluntness and the subtleties of sarcasm and teasing don't translate well by text so I try to avoid them. But, seriously? If you've asked this mermaid for a tour of her boat and she's saying "hey, let's get together," just make it happen. I'm always catching sailors I'm not trying to hook and when I finally have one I want on my line, I can't seem to reel him in. Sigh.


The loose working plan has been to leave Annapolis as of March. I believe my slip has already been rented out. I was thinking that I'd just be underway for a week and then stop somewhere for a month or two to work and keep doing that until I ended up somewhere I wanted to stay longer. Of course, I still have a lot of work to be done on the boat to be able to head out, such as get and install solar panels, but even with cash in hand I can't get guys in Annapolis to show up to do the work. Everyone here just wants to curl up for the winter and drink. But as I am used to in this life, the brief upswings never last long. The work in Miami dried up a little over two weeks ago. Back I go to looking for research gigs or, more likely, waiting tables. Fingers crossed I line something up within the next two weeks as I never have much of any financial cushion. Looks like my big cruise this winter will probably just be over to Spa Creek. I'm disappointed, of course. But the devil you know is better than the one you don't; right? I just need to make the best of my time here and my friends here and keep living the dream.