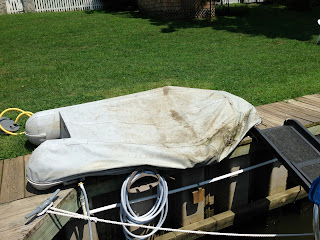 On Monday I finally managed to drag out the inflatable dinghy that was gifted to me by the marina owner. I was forewarned it leaks and needs patching. A dockmate helped pull it out on the grass and pump it up. He poo-pooed how rough it looks and opined I'd be better off buying one off craigslist. I don't want anything that looks worth stealing and prefer not to just treat everything as disposable. Besides, the other dinks in the marina don't really look so much more pristine.


I had the dog jump in and out of the dinghy, though we were just on the marina lawn. I figured getting her acclimated to it and comfortable jumping over the tubes and laying down inside would only help when I need her to board when it's afloat. She seems to like the dink. I can see us having some fun adventures and excursions in our little inflatable.


A little less than two hours after pumping her up, the port tube was noticeably soft. After 48 hours, it was substantially deflated. 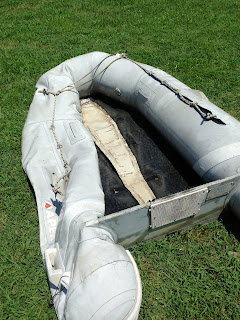 On Thursday I hosed it off, gave it a quick wash and scrub with the deck brush and set all the floor boards aside in the sun. I pumped the port tube up again and went over it inch by inch with soapy water to find the leaks. The only places I found bubbling were at the edges of two prior patches.


Although using two-part glue for Hypalon would be the best course of action, it is a little complicated and time consuming for my taste. Having heard of positive results from using GFlex epoxy (or even 5200), I will use it for my first patch attempt. Unlike the two-part glue, it has other uses for me around the boat and is also a less hefty initial outlay. My plan is to use scary-toxic MEK to loosen the edges of the patches and clean the area. Then I will sand both sides with 80-grit sandpaper and apply GFlex adhesive epoxy. Another upside to GFlex is a fast cure time: 7 to 10 hours. If the GFlex doesn't work I can always go back and patch it with the two-part glue.

I also found two small holes worn through the bottom of the dinghy and two areas close to wearing through. I bought a small piece of Hypalon and will cut patches to apply on those four spots. If all the patches hold, the other project will be either rehabbing the floorboards or making new ones. I have some marine plywood at my disposal for the latter approach, but would need to come up with a saw and saw horses. New boards would definitely be an improvement.

Last night when I came home I found the starboard tube soft. It had been perfectly hard only six hours earlier and had held up for three days with no signs of a leak. What could have happened to it while I was gone? I was upset but tried to just shake it off and look at it as one more project to tackle. This morning when I took the dog out I expected to find the starboard tube further deflated but instead it looked just fine. And of course it then occurred to me that it was simply the much cooler night we had last night that made the tube seem deflated. With the warmer temperature this morning the air inside had again expanded to fill the tube.

My week was somewhat derailed when in the midst of cooking lunch on Tuesday the burners went out and wouldn't re-light. I guess all my recent baking ran through the propane faster than during the first quarter of the year. I couldn't just run out to refill the tank because it's old and lacks an overflow preventer. The hardware store had told me they would not fill it again. If I was going to have to spend money on a tank, then I wanted to get a good fiberglass one. The fiberglass tanks are lightweight, will not corrode (the mild steel ones rust quickly), and--in theory--one can see the level of propane in the tank through the fiberglass.

Fawcett's did not have any and the hardware store no longer carries them. So I settled for going to West Marine and special ordered one for $130. (Yes, you can get one less expensively online, but the extra cost was well worth being able to make coffee aboard this morning!) When I picked it up yesterday I was disappointed that it was green. I had definitely been expecting it to be gray. Bright green on my aft rail is not the look I'm going for. But I really should cover the tank for UV protection anyway, so I am going to find a way to be okay with it. 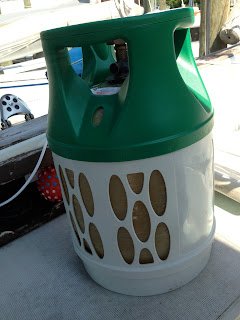 I don't know about being able to see the propane level; it definitely isn't very clear. The hiccup I'm most worried about is that the hardware store just went straight to filling the tank and it would only take 3.5 liters of propane. I had paid for 4.2 and the tank holds 4.7. I insisted the tank is brand new and empty and should take 4.7. The woman filling the tank asked if I'd purged it. I didn't even know what she was talking about, so obviously I had not. Of course there was a sticker right there on top of the tank telling the filler to purge the tank first. I hadn't been looking for it and she clearly didn't notice it when she hooked it up to fill. I've used the stove successfully this morning without incident, but worry about what exactly is in the tank with the propane and whether it is a hazard, bad for my stove, et cetera. But in the meantime, I'll be heating up some chicken and italian sausage for lunch and cooking up the chicken that has been marinating in olive oil, garlic, and Old Bay. Let's hope it hasn't also been marinating in Salmonella.


Yesterday evening I headed back to Thursday Night Races at J World. Your skipper definitely makes or breaks the experience. The entire evening was unpleasant and when they called for a third race I was disappointed that we weren't heading back to the dock. I was assigned to the jib. I quickly learned that between just not having much upper body strength and constantly nursing a torn rotator cuff, I can't pull in the jib against the wind and the winch is virtually impossible for me to crank. If I don't have the strength necessary for the jib on a J/80, I certainly won't be able to fight it on my much larger boat. A couple of the crew had to help me on every tack (of which it seemed like there were an infinite number) because I simply couldn't fight the sail in by myself. By the end one of the other crew members and I had gotten down a bit of a "system" that made it less unpleasant, but to the bitter end I was constantly left cleating the sheet and trying to grab the winch handle as the skipper buried the rail and barked, and I was scrambling to hoist myself up to the high side of the boat.

Perhaps as a marathoner I should have more appreciation for racing. Except that I don't even like running races. They are just a way to challenge myself, keep myself honest and on track with training, and it is more convenient for very long distances to have someone put out food and water for me. Racing sailboats just does not compute for me. I simply can't wrap my head around getting upset and hyped up about what is really a meaningless competition and I fail to see any fun in sailing nowhere around some marks. To each his own; I know a lot of folks are very serious about racing and seem to enjoy it. My interest in racing is entirely deflated.

One happy note to this long and tiring week: a cheerful pair of Keen sandals. 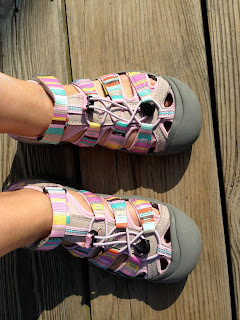 I was looking at various models at Fawcett's and asking about other colors, being picky about those sort of things, being a bit of a girly-girl and all. The salesgirl asked what size shoe I usually wear. It turns out that the largest youth size in the Keens fits me. At almost half the cost and with more "fun" colors, I was sold. These sandals are so "me," and make me think of cotton candy and bumble gum and jelly beans. They are amazingly comfortable, to boot!

And finally, as I write this Hunter has brought in an icky not-quite-dead thing. I told the marina owner yesterday that he must have mice under the shed because the cat had been watching a particular spot intently. He's been playing with it and licking it and then jumped up on the settee with it. Yuck! But he is a helluva mouser. 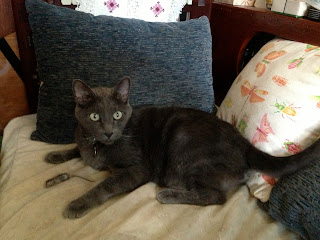