bruised but not broken

Now the bruises have really come out. Black and deep purple. Large ones and small ones. Smaller ones dot along the inside of my right arm, and a light but painful one on my left forearm. A huge black one about 5" by 1" beside my knee distracts from many others along my leg. On the left side of my midsection it looks like someone punched me in the ribs. And centered at the small of my back a small but very dark bruise. We'll see how long these mementos of Thursday Night Races linger, having been tossed back and forth, bouncing off winches for two-and-a-half hours. Not my idea of fun.

Initially, I wanted to shake it off and hope for a better experience next Thursday. But my precious few days off need to be focused on making progress aboard and enjoying myself. I think I'll focus on saving up to replace a few pieces of the running rigging so I can get my own vessel under sail. I've been urged to do so before the much gustier winds of September and October arrive.


So, the port tube on the dinghy is once again deflated. I rushed the job because I generally prefer to work on these projects on my own. But now I will take the time to pull up the prior patches, remove the current adhesive, and use Hypalon contact cement a friend is donating to the cause. I'll have to hope for a day that the weather and my work schedule are both clear. The GFlex epoxy on the bottom of the dink may have sealed up some holes, so I still need to check that and plan for patching the others on the bottom as well. The remaining GFlex should work well on the threshold of the companionway; I just have to find a day I can leave the boat open for the 7 to 10 hour cure time.

The hard sailing dinghy had been in the water since January, so I seized an opportunity to get a dockmate to help me pull her out of the water. He volunteered to scrape the barnacles, so I wasn't exactly going to say no. 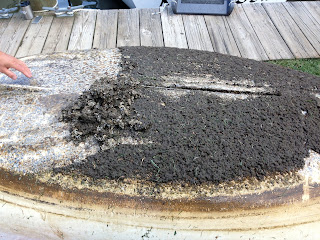 She was immaculate when given to me, so I feel bad that she looks so rough now. But I couldn't have undertaken some of my projects without her. I just wish the dingy dock at the marina did not have the owner's dink somewhat permanently on it, otherwise it would be far easier to drop her back in the water now and again to practice sailing with her.

I don't know what is in the new propane tank that was supposed to be purged, but so far I have not had any problems with cooking and baking. Yesterday I made cheesy garlic biscuits, yum. 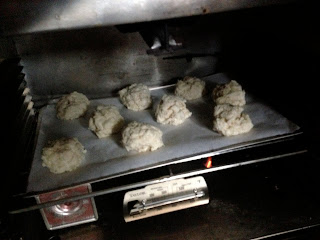 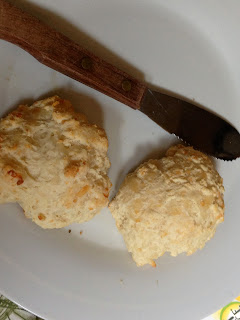 I had three biscuits left, sealed in a ziploc bag on the galley counter. Breakfast for this morning. When I got up I found an empty ziploc bag, cleanly sliced open, on the cabin sole. Apparently, as I slept some sneaky cats stole my biscuits! I'm not sure if the dog was in on it, I would usually wake up from her jumping off and on the bed, but only Hunter is sneaky enough to have stolen the bag off the countertop. Well, at least I got two-thirds of the batch.
Posted by Suzy at 1:20 PM