This past Saturday marked five months living aboard. I must not have been focused on that mini-milestone since it didn't occur to me until having dinner with friends who are soon-to-be-liveaboards and I asked "Is today the 2nd?" Indeed, it was, they confirmed.

That is one of the challenges I face living aboard and not having a traditional Monday-through-Friday office job: the days rather blend together. Instead of Mondays and Tuesdays I think in terms of "the day the tide was really low," "the day it never stopped raining," or "the day I filled the water tank." I guess that's not entirely fair, since I do remember certain days of the week have a great food or drink special at this or that local pub or eatery. I couldn't care less about the Wednesday night sailboat races, but I sure do love the "Wednesday night race tacos" at The Boatyard during the season. And just as the days seem to blend together, the day often passes by as I clickity-clack on my laptop unaware of the day slipping into night because my port lights are all covered with insulation. Thus, I tend to have a day or two a week where I don't head ashore to shower until five or six in the evening, and sometimes, like today, simply shower and get right back in my jammies. Like boaters who don't admit running aground, liveaboards who deny they have days like this are simply lying.

But Sunday was quite the event going for a mini-cruise across the creek. I had spoken with someone at a local marina and he agreed to let me bring my boat over to get pumped out as they made the rounds to their liveaboards. The City of Annapolis treats its liveaboard community like dirt so the city's pumpout boat "breaks" early and often. Even if it wasn't "broken" I trust the city would winterize it as long as possible rather than at least breaking winterization once a week to service the many, many liveaboards who stay through the winter here. Many of those liveaboards shrinkwrap their boats to keep snow off the decks and aid in insulation, so even if a dockside pump-out station was open those boats could not get to it. Why does it matter? Well it's all kinds of illegal to just pump overboard. I've heard the fine is $5,000. And, you know, it's kind of wrong and all. But have no illusion, the minor amount of waste boaters might dump into the Bay is pretty much de minimus. The runoff from chicken farms on the Eastern Shore is the culprit for the Bay's pollution. And when storm water causes the waste treatment plants to overflow into the Bay... sigh.  But despite science and reality the liveaboards are scapegoated and get constant wagging fingers about how important it is not to pump overboard. Too bad local, state, and federal government show virtually no interest in making year-round, publicly accessible pump out facilities available (whether dockside stations, pump-out boats, or pump-out trucks) so that complying with the law was not an amazing pain-in-the-ass. So, I was jumping up and down ecstatic at the prospect of cruising over to a marina that has a golf cart with a giant shit-sucking vacuum on it to pump out the boat.


A friend brought his daughter along for the "cruise" and we worked on departure preparations, including disconnecting the shore power and cable and removing the dog ramp, and even tried to start the engine. I wanted to be as prepared as possible before my friend who helps me captain the boat arrived; I am always on "Miami time," i.e., 15 minutes late, so I wanted to have things ready to go for once. But the engine wasn't starting right up and I wasn't sure how much throttle to give it to get it to turn over. For an hour he didn't have much luck either. I had been a bad, bad diesel owner and hadn't started it up in two and half months. Diesels hate the cold and hate to sit. I should be starting the engine and letting it run a little weekly. The four of us crossed our fingers, said little prayers, begged and pleaded, but the engine smoked and sputtered. I was close to giving up but headed below to make coffee for the older folks and cocoa for my friend's daughter. At last the engine turned over and we all jumped and clapped, and I gave a huge sigh of relief. Here we were on a blustery Sunday morning, winds blowing 15 to 20 knots, occasional snowflakes falling, but warming our hands with mugs of coffee or cocoa and off for a pump-out cruise across Back Creek!

It was great to have all of us aboard. My friend's daughter is great with the pup dog, so she was in charge of getting pup to the bow or back to the cockpit and keeping an eye on her. One friend at the helm while two of us handled lines was handy on arrival and essential when we managed to turn around in the fairway so that we could leave the dock moving forward. Reverse has much less maneuverability and we needed as much control as possible with the winds blowing us toward other boats. 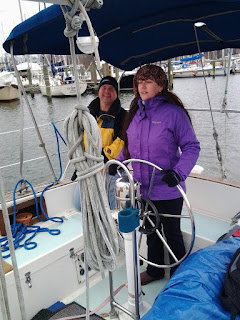 I only took the helm for a short jaunt on the return. The winds were something to contend with and I still get nervous when I get particularly close to boats that look like they exceed my insurance policy limits. Over on Spa Creek I expect there were many boats out for the frostbite races, but I only spotted one other boat (also a sailboat under power) transiting Back Creek.

When we returned the tide had fallen enough that we couldn't get the boat far back enough in the slip to re-attach the dog ramp. For a couple of days the pup had to be lifted on and off, a precarious undertaking. She knows I'm not really strong enough to lift her securely and balks. At one point I had to sit, pull her onto my lap, and then lower her down to the boat. Even now that I have the boat closer the ramp keeps falling off as the boat shifts in the wind and tides. I am going to need to relocate the ramp and modify the solution so that it remains more stable.


After lunch we took a look at the shroud where I suspected a bad leak. When we pulled up the cover to see the chainplate connection through the toe rail, we discovered what looks to be plenty of dry rot. This cold and damp time of year is not ideal for addressing these problems, but at least some stop gap measures would be better than nothing. To use Git-Rot one really should dig out all the rot and get the area dry. That simply isn't possible right now. We went ahead and mixed the Git-Rot and started pouring it down beside the chainplate. 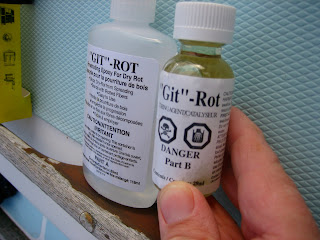 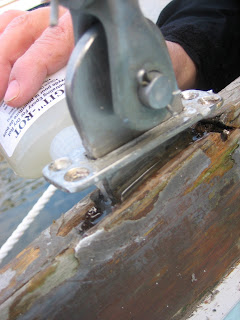 The void would seem to fill, then drain, fill, then drain. It drank up the entire batch. We topped off the remaining gaps with 3M 4200 sealant/adhesive and then coated the cover as well. We weren't really sure if that was the source of the leak, but it certainly needed attention and will get more thorough remediation in the Spring. A half hour later I looked over at the area on the cabin sole where the leak would manifest and lo and behold, the Git-Rot was coming out. I may not know the path that leak is taking behind the scenes, but at least now I know the beginning and end points. It's ironic how love of the water brings us to our boats, but the water quickly becomes the enemy we constantly battle to keep outside!

What's the moral of the story in this post? I guess that even when the weather is cold, windy, and gray, even when engines sputter and leaks abound, any time you can cast off the lines with good company is a good day. Living aboard is a challenge, nothing is easy, but I wouldn't trade it for anything.