spring is around the corner (right?)

Although today is a gloomy, rainy Tuesday, this past Sunday showed us a glimpse of Spring around the corner. Sunday was over 50 degrees and sunny. I turned off the heat, opened the hatch. Pup dog fetched a tennis ball ad nauseum. The cats came out and sniffed all around the docks, chewed some grass, rolled on the pier and the decks in the sunshine.

Perfect weather for...boat chores! And I am such a good friend that I let a couple of my friends in on the fun! We filled the water tank plus a dozen gallon jugs for drinking water (between water for my coffee/tea and for the pets, we use a little less than a gallon a day). Cut down the Christmas lights that had been zip-tied to the bimini top. We were going to try putting sealant around a deck fitting where I suspect a leak, but the sealant wouldn't come out of the tube. One friend really wanted to bail out the dinghy (seriously?) but I convinced him that insofar as I had the galoshes I was better prepared. They laughed as I bailed out the chilly water and kept saying "Yep, living the dream...I'm living the dream..."

Somewhere in the midst we managed to drink a few mimosas. You gotta love friends who bring the champagne, orange juice, and beer and also happily help with the boat chores; priceless! One of the guys installed the oar locks I bought at Bacon Sails (one stem is a little too wide...) and the keepers I was gifted by a good friend, then he rowed the dinghy over to a running light so we could remove the bulb I think needs replacing. I got talked into taking the dinghy over to the pub...only a four-block walk but a long way to row, especially against the wind. But it was fun to get out on the water nonetheless. I let the guys row her back after eats and drinks and I walked the pup dog home. 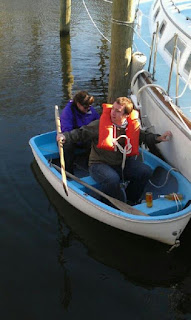 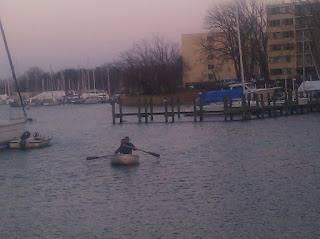 Yesterday was chillier, but still sunny. I managed to finish some of the chores I had set out to do Sunday: relocating fenders from the lifelines to the cars on the traveler--easier to move and no longer weighing down the lifelines. I also tied a fender between the boat and the dinghy so the dinghy wouldn't bang into the boat in the wind. Today we're actually rocking in our slip. I keep thinking someone is boarding the boat because we've been aground so much from the low tides lately that I'm not used to the boat moving in the wind anymore! The higher tides are bringing me almost level to the dock at times, what a change from being four feet below the dock and having to climb out onto the finger pier on my belly. (The neighbors will miss seeing me laying on the finger pier in my pajamas, holding on for dear life. Hopefully that's not on YouTube...yet...)

Yesterday I also managed to drag myself out for a run. Just 3.5 miles, not the usual 6 or 6.25, but better than not going. Good to clear my head. I feel I've rounded the bend from the damage the floppy-haired sailor guy did. Although I'm not looking right now and it may be awhile before I'm willing to open myself up again, I am glad that I can smile and laugh and dance again. I know that all my friends who say he was never good enough for me anyway are right. But it's still raw enough that I dread his return to my home port and my local pub. But the best revenge will be to leave him in my wake.
Posted by Suzy at 4:08 PM