One year ago today was the last time I spoke with my father. He didn't speak much (unusual for him) and sounded so tired. He didn't sound at all excited for his birthday, two days later. He had the big heart attack the following night. I did not find out until I was about to call him for his birthday and received the call with the news. 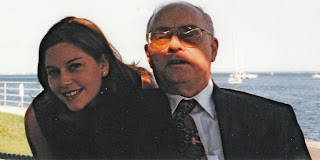 Every year has been worse than the last, but this past year, losing my father, has been the worst by far. He was the singular person in my life who was always there for me, always supported me. Beyond childhood lessons about things like gun safety and friendship, he never gave me advice; he just listened--and probably bit his tongue a lot. I got my dad's hazel eyes and amazing ability to be cat furniture.

I didn't think of my dad as a boater; but he was a kayaker, built a beautiful wooden ocean-going kayak, he scubaed, and was involved with his local Power Squadron. But I know he had dreams of being on the water. It is bittersweet that I only have my beloved boat, my first home of my own, because of a little money left behind in his wake. I know he'd be sad to see me heartbroken, but proud of me for undertaking my adventure aboard. A river knife of his has already been put to work aboard and his binoculars will serve me well as I cruise.

I thought of him on my run today in crisp sunshine; he was a jock, a high school and college football and track star, and very supportive of my marathoning. I will have to get back to the rink in the next days for a skate; my favorite picture of me with my dad has always been when he was teaching me to skate in Montana. 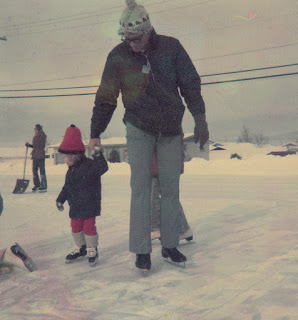 He was a great father, deeply loved, and sorely missed.