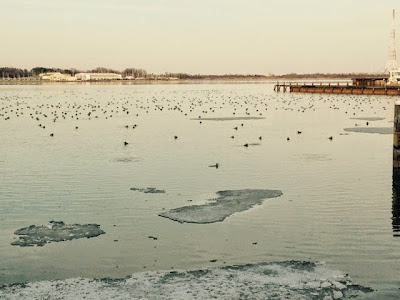 Apologies for not having written more frequently. There simply hasn't been anything good or particularly interesting to report. Being here is being in a state of going nowhere. Which is exactly what I don't want or need. I wanted to be leaving this place today, so feeling stuck here, in this nothing place, makes me feel hopeless.

In hindsight, Annapolis was not a good choice for me. I've accomplished nothing in my time here and simply continued the decades-long trend of every year being a little worse off than the last. For a time I felt this stop along the way was a necessary respite, a chance to get centered and heal after horrible relationships I finally escaped. But if that was the case I have long overstayed my time. There is no opportunity for me here, nothing to keep me here, nothing that even moves me to leave the boat any given day other than the the need to walk the dog. If only I'd had the sense to buy a boat and sail away seven years ago when I had the financial wherewithal to do it. But, alas, hindsight is always 20/20. 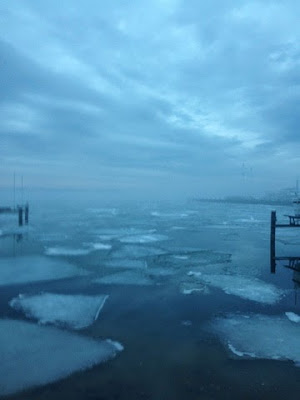 I am grateful nonetheless for the handful of good friends I made by coming north and for my beloved boat, which has saved me literally and figuratively. But the time to move on has come and gone and the migration must become a priority. Life kicks me around and I do get down, but the one constant in my life is my resiliency. And I guess deep down I wouldn't trade that for success, or money, or love.

The winter has been long but now spring is beginning to bloom. Gone are these eerie, foggy mornings with chunks of ice covering the Bay.

Once the ice thawed in the marina and on the creek, there were so many dead things floating by. Dead fish, dead ducks. As if surviving the disgusting polluted Bay wasn't hard enough, the winter had to stress everything just that much more, including me.

Three months without work, particularly over the holidays, was rough and depressing. Gratefully a few projects have come through here and there recently. Nothing long-term or permanent, but nothing along those lines ever works out for this stridently independent gal anyway. I have to chart my own course or things quickly go to hell. If I can keep netting little consulting gigs here and there to keep fed and gradually get the boat in cruising shape, that's all I really need. The only reason to have money is for the freedom it buys. The stuff, the things, they are all a trap and an illusion. All I want is to be free.

I am close to being able to replace the house and starting batteries aboard, which is critical since I have been stranded in my slip since last February. Then come solar panels. I have some repairs to make for which I already have the parts but need to figure out how to do the wiring myself or hire some help, and I will need help getting the chart plotter installed. Then I need to remove the awful old HVAC from the cabin top and put on a hatch (about $500 for the hatch, ouch) and I could do to replace all the running rigging (about another $500). So, yeah, freedom ain't cheap. I love how people think it's inexpensive to live aboard because dockage isn't as pricey as renting an apartment. I just figure the people who make that comment have never looked at the prices at West Marine. 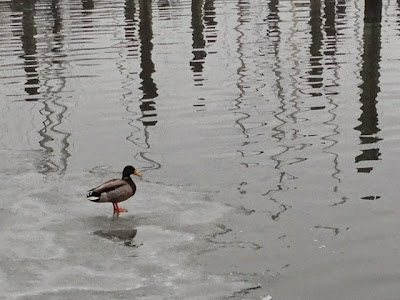 From the "people suck" category: There is a house in Eastport that we sometimes pass on our walks and the owner kept a jar of dog treats out front for passersby. They were labeled "Puppy Pause." They were just a cheery, neighborly thing that made pup dog happy. But someone stole the Puppy Pause treats. Seriously? Do people have no sense of right and wrong any more? From little things like that to all the atrocities in the world, it's just disheartening that people are so mean and dumb. As one friend of mine says, "We've done too much to interfere with Darwin." Amen.

So as if I didn't have enough projects to tackle, for which I generally lack funds, ability, or both, now my galley sink was clogged and while draining better, it is still slow. I'm not looking forward to taking everything apart again to try to snake it farther down the hose. I'm hoping that eventually the combination of treating it with boiling water and Super Digest-It will clear out the rest of the grease. I wish I could say I did the initial job my self, but I'd probably still be trying to get the damn PVC connections loose. No, I sunk really low and played the damsel-in-distress card and flashed a smile at a neighboring powerboater who took the pipes and hoses apart much faster than I could have. Here are some photos of the mess. When I let that grease go down the drain and it hit the cold temps it formed a perfect sealant with coffee grounds mixed in for good measure. Live and learn. Very stupid mistake that I won't repeat. 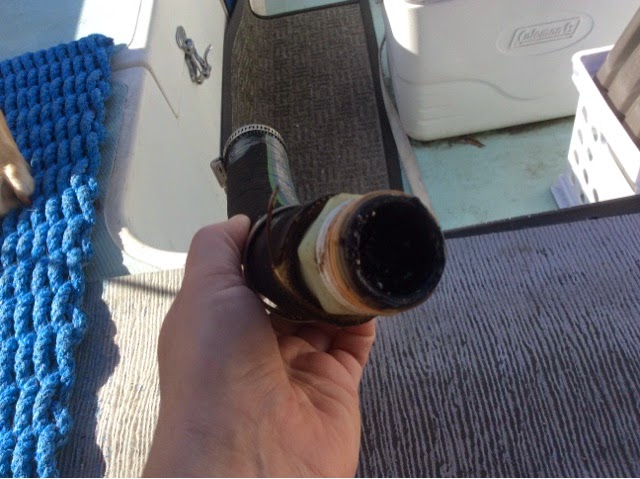 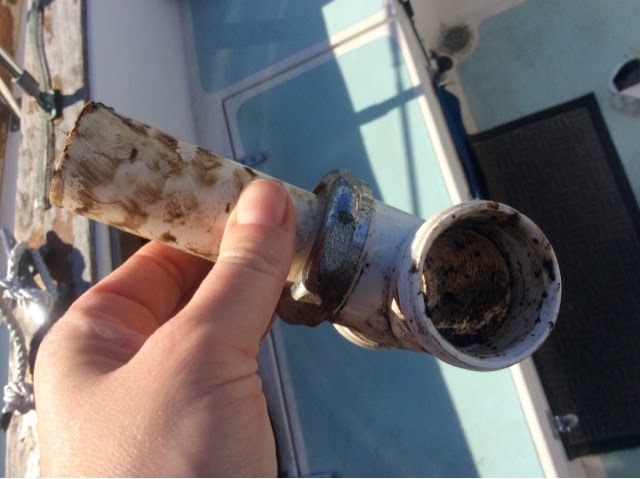 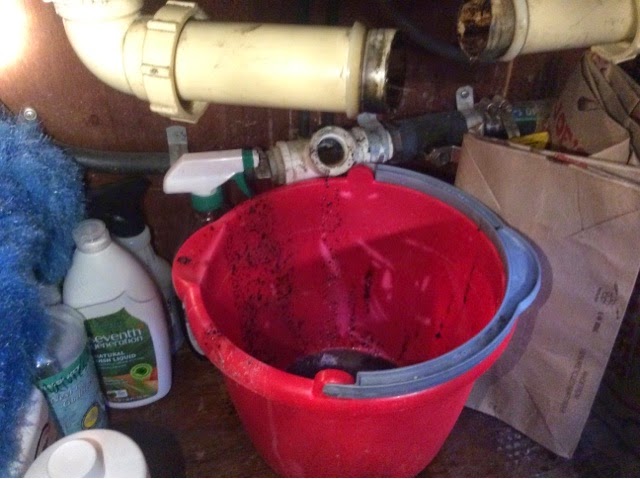 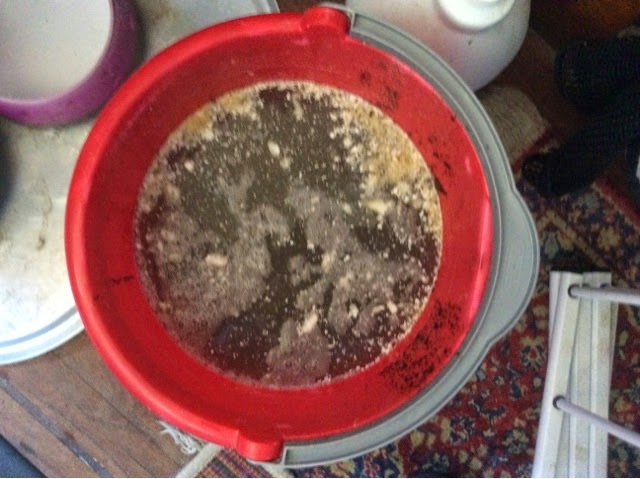 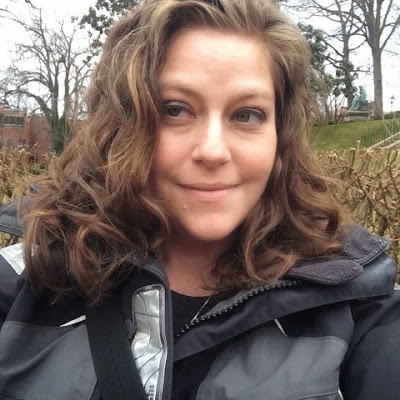 In other news, since I finally had a couple bucks to my name I headed for a haircut after five months since the last one. I chopped seven inches off my hair. The curls are so much happier and I may take a few more inches off next time. I want to say I was raised by wolves, but that would be an insult to wolves. But, yeah, it would have been nice to have had a mom to teach me girly things like that I have naturally curly hair that I have spent most of my life trying to make straight. Ugh. Anyway... I love the new cut and if I get it to dry with happy, bouncy curls I can even sleep on it and have it look presentable enough for a couple days. It seems like winter hasn't quite left us, but in Maryland it's pretty certain that I'll need air-conditioning within a month so having less hair to stick to me in the humidity will be pretty cool. My hair hasn't been this "short" in a decade so, as you may have surmised, this is a big change for me and I'm excited. And, of course, it'll grow back if I freak out. I may not be free yet, but trying to at least let my curls be. 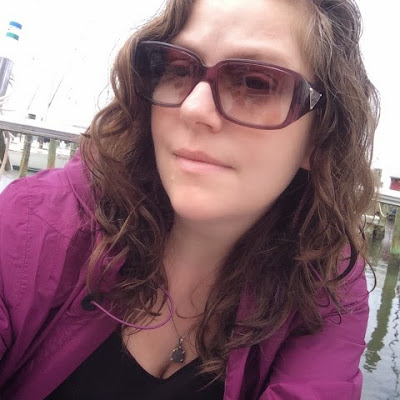