If you don't have a perfect Pottery Barn house and a centerpiece Martha Stewart would be proud of then, well, let's be frank: you're a bad wife, a bad mother, a bad woman, a bad American. Spend, spend, spend! Buy, buy, buy! These are the modern carols of the holidays. Our American (Western?) society is founded upon buying cheap plastic crap from (inhumane, animal-testing, slavers) China and then promptly throwing it in US landfills so we can buy more cheap plastic crap from China. Since this is the only way to fuel our economy now, (because American ingenuity and support of local small businesses is effectively dead), this incessant, addiction-riddled, consumerism has somehow become Patriotic. Yes, it makes me want to vomit.

Society puts ridiculous pressure on us all to buy gifts (I haven't in maybe 5 years) and to put on a perfect holiday. I remember being so poor growing up that we had an enormous box under the tree. Elaborabately decorated. And empty. The note said the box wasn't empty; it was filled with love. Most of the gifts under the tree today aren't filled with love. They are filled with guilt, obligation, and fawning attempts to buy affection. 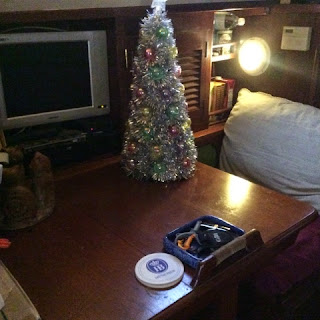 Despite this rant, I actually love Christmastime. The smell of Douglas Firs, the sparkling lights, decorating the tree, drinking cocoa, hoping for a white Christmas. I still watch classic Rudolph, Grinch, and Charlie Brown Christmas shows if I manage to catch them. But as with most things in life now, I am concerned with the substance, not the appearance. I would rather have fewer friends who are top-notch, focus on quality not quantity in my meals, relationships, and how I spend my time. Things break. Things generate clutter, mentally and physically. Experiences and adventures provide a lifetime of memories.

On the subject of materialism, but colliding with the soap opera of my life, I headed to the pub for my Thursday night chicken tostados the Thursday before Thanksgiving. I noticed "Dimples" was sitting at the bar and tried to stroll past but he'd spotted me and I got roped into sitting there with him. I don't know what I saw in him other than the dimples but there I was getting lectured for two hours. I'm sure you all know just how much I relish unsolicited advice. (Sigh.) He went on and on about how with all my education I should be on a nice, new 60' sailboat. That I need to go back to a real job and make real money, that even if I only made $150,000 I could at least be paying my bills, my student loans, and get rid of my boat. Although a life in the law is not much of a life worth living in my opinion, I explained it isn't exactly easy to find a legal job these days, and that until you're post-menopausal law firms don't want to hire women because they think you'll immediately go on maternity leave. He looked at me and said I obviously don't have to worry about that anymore. Excuse me? I'm still quite fertile and only a hot 35-year-old who wants a lovechild away from being a mom.

So, the idiot basically tells me I'm lazy, old, and that my boat is a dilapidated wreck. Not exactly the way to my heart, that's for sure. But gee, Prince Charming said he would help me with "exactly two" things: borrowing his diesel mechanic to look at my starter and getting my boat to a marina for a haul-out. Those two things, he repeated, he would help me with and for those two things I could call him. I was puzzled insofar as I never asked for his help and I'm sure not going to take it from some schmuck making me feel like a charity case. I politely smiled and nodded. He kissed me on the cheek and told me he'd see me later. I walked out the door and deleted every last trace of him from my phone and iPad. I didn't even want to risk sending a drunken text rant or anything. He's a rich guy who only cares about and values shiny new things. Me, my life, my boat, we sparkle from within, but he can't see that. His loss. I texted friends in town to smack me upside the head if I start getting all gooey over Dimples again. I deserve so very much better than the likes of him. Gratefully, one of my best friends in town has been at the pub with me the last few times I saw Dimples there and I simply ignored him and he's ignored me (other than feeling my ass when he walked by on Saturday night, ugh). It sucks to have that awkward feeling at my local watering hole, one that he is new to. But I'll just have to suck it up and not make that mistake again.

What do I need in a guy? One like this! www.twentyeightfeet.com. (Please watch the beautiful documentary; it's only 8 minutes long and a feast for the eyes and soul.) Floppy hair, check. Jim Morrison curls, check. Young and adventurous. While you're blinded by that chiseled bod, don't forget to notice the great smile. Loves his boat from the bottom of his heart. And has the right ideas about life, money, and what it means to be rich. Yep, my dream guy. Unfortunately for me, that guy has a lovely girlfriend and she's one of those rare white girls who can carry off dreadlocks, so no competing against that. But if he's got a doppelganger, I sure need to meet him and sail off into the sunset. (A big thanks to my friend Chuck who sent me the video; I needed to see that there really are guys like that out there somewhere!)

How did I sell myself so short in life and love? It's hard to explain how demoralizing it is to have literally applied for thousands upon thousands of jobs in the past decade and have had interviews I can count on my fingers and toes. Probably just my fingers. It really tells me I don't have anything to offer that this society wants or values. Admittedly, I don't really like, respect, or value this society. So I guess the feeling is mutual. But I am so underutilized and we all want to feel useful, purposeful. And we all have to eat. I don't need a fancy life. But my pets, who have kept me going through it all, get a fraction of the medical care they should. And their medical care exceeds mine by at least double. I haven't seen a dentist since 2008. It just wears me down sometimes. But I keep on keeping on, because that's what one has to do. If I am anything, it's resilient. But when people ask "How are you?" I want to stop saying "hanging in there," and instead wholeheartedly say "the world is my oyster!"

So, in other news, my engine won't start. I was all ready to head out for a little day cruise, but the starter just buzzes and the engine doesn't even try to cough or strain or anything. My diesel guy came and listened to it and said it's likely the battery is kaput and just not enough juice getting to the starter to even spin it. I protested that my battery monitor says 13.2 volts. He said that is probably only because I'm on the battery charger, hooked to shore power, and if I disconnected the shore power I'd likely see the voltage plummet. Now that I think about it, the voltage has stayed constantly at 13.2 for a while, whereas it used to drain down to 12.4 and then recharge up to 13.4. I still need him to come back and help finish the diagnosis so I can plan accordingly. I have been planning to pull out the two 4Ds (200 pounds each) and replace them with as many (75 pound) golf cart batteries as I can fit, and also replace the starter battery. One problem I won't repeat: prior owners connected the house and start banks, which should be separate. Naturally, I don't have several hundred dollars laying around to buy the new batteries, or the solar panels I wanted to install at the same time so it would all be in sync and happy. OK, I know I just ranted about not wanting things, but I admit batteries are the kind of things I need cluttering up my life. They are things that will help me move forward rather than things that hold me down. There, see how I rationalized that and made it sound very beautiful and philosophical?

In other boat news, I had a diver out. Sean from Open Water Diving called me back within two hours of my initial call, made it out in less than a week, was very professional, and fairly priced. He also does search and recovery so if you lose a phone overboard in Annapolis, now you know who to call. I will admit that I got his card back when I was working on the fishing charter. He had been cleaning a boat in that marina and was changing out of his wetsuit into street clothes. I walked by and said "whoa, no need to rush putting on that t-shirt." What can I say, we all like youth and beauty. Most guys take their shirt off and you'd beg them to put it back on, so when a guy has a nice physique, it's nice to enjoy the view. I got his card and of course I waited until winter to call him, so alas, no show for me. But trust me, he's more than a pretty face. Very professional and did a great job. In the cold and rain he came out the day before Thanksgiving and cleaned the hull and installed a new zinc. The hull was very dirty, but he said the bottom paint is in good shape and I should be good until July for another cleaning. Bad news was the old zinc was totally gone. But a new one is there now so I'll sleep a little easier.

Someone on one of the boating forums has a signature line that says "rust never sleeps" and it sure is true. The corrosion is a battle I feel I just can't get ahead of. It just gets overwhelming. All the projects. Not having the money to repair things I know need attention. I love my boat so much and I frequently tell her I'm sorry I haven't done more, done better. She saved my life and I have to return the favor.
Posted by Suzy at 10:24 PM