Last Friday I got up en la madrugada (i.e. at o-dark-thirty) and worked my first fishing charter. The night before, I packed my lunch and my backpack (layers, sunblock, knife, gloves, et cetera). In the morning I made a thermos of coffee to take along. It was a rush to get ready, feed the pets, walk the dog, and get out the door.  At least the commute is only 3 blocks.


Next time I may have to get up at 4:00AM, or perhaps at--gasp--3:00AM so I can get a run in first. Since I often wake at 3:00AM anyway and struggle to get back to sleep, maybe that isn't as crazy an idea as it sounds. There is no way I would be able to get in a run after working a charter, and I don't want to slide backwards on the pace and mileage I've built up.


We had four guys on the charter; three friends and the son of one. They were a really nice group and forgiving of it being my first day. The captain showed me how he sets up his trolling lines and I helped put everything out. Things were slow, so we added a couple of dummy lines, which have lead sinkers and lures, but no reels. We had a couple of knockdowns where a fish hit the bait hard enough to pull the line off the planer board line, but we weren't hooking anything. The guys were getting pretty disappointed. I checked some lines to see if they had jellyfish on them, (it makes the lure unattractive to the rockfish), but no jellies. For whatever reason, the fish just weren't biting.

When we needed to start pulling in the lines I started with the dummy lines. I got one in and was going to finish putting it away before moving on to the next. The guy who seemed most disappointed that we hadn't caught anything yelled to me that he thought we had a fish on. I laughed it off thinking he was just pulling my leg since I was trying to get the port dummy line put away. He insisted he thought there was a fish on. We all looked at the lines but none were down and no reels were clicking. Then he said, "No; on this line!" pointing at the starboard dummy line. When we started pulling it, a fish popped along the surface and the panic ensued! (I don't know to whom to attribute the quote, but folks say something along the lines of "fishing is hours of boredom punctuated by moments of sheer panic.") Since the line has no reel, you simply have to pull the line in by hand. Gratefully, I was wearing grippy gardening gloves that work well for that task and helped the guy pull it in. He was thrilled to have finally caught something and bringing it in by hand made for a special story.


Once we were back at the dock I watched while the captain filleted the fish. If there had been more I might have tried, but I certainly didn't want to do any damage to the only fish we'd caught on the trip. So, learning how to remove the hook safely when landing the fish and how to fillet it up properly are still priorities. I washed down the rods and lures, brushed the hair on the lures, put away the gear, and scrubbed down the deck and the fish box. It was a long day but I've got no doubt I'd rather be out there on the water, getting some exercise, being in the outdoors, than stuck in some office or slinging drinks. I wouldn't be surprised if it turns out to be one of the most interesting jobs I've had.

I figured I'd go out that Friday night, since I finally had more than $3 to my name. I laid down at 7:30PM for a quick nap. I woke up around midnight, and again around 2:00AM. I finally got up at 8:30AM. I guess after a week without sleeping pills and a long, hard day on the water I was pretty tired!

I must not have done too awful a job since the captain had me back for another charter the next afternoon. The group of seven young guys doing a bachelor-party weekend looked a little confused walking down the dock and seeing me there readying things. I think most mates have hairier legs and less curves than I do. The guys were suffering a bit from the previous night's festivities, and some of them napped while we kept searching for fish. Rain and thunderstorms had been predicted and kept most boats in port that afternoon. Thankfully, the storms passed north of us. But we only got one fish hooked and he ended up getting away. The guys were disappointed but some seemed pleased to have a video ribbing the groom for losing the fish.

My big mistake that day was not keeping the planer board line taut enough when sending the board out. I was trying to hold it and pull it back, but the line whipped right through my bare hands and pulled behind the boat. I knew that was a serious problem since it could easily foul the prop. Although it hadn't caught the prop, it was tangled around the rudder. The captain tried to free it with a boat hook but we ended up having to pull the board out and cut the line to be able to pull it free of the rudder. It was only a few minutes, but pretty frantic. Once the line was clear the captain tied it back on the board and I sent it out... very slowly, and with my grippy gloves on! A serious mistake that could have ended much worse; but lesson learned, and a mistake I won't make again.

Yesterday I headed back out on my friend Captain Chris' boat for a day of fishing. I was hoping we'd limit out so I could get some good practice on cleaning the fish. For some reason both days I've gone out on this boat this season have been cold and foggy. All that sunblock I put on was definitely wasted, and I was glad I threw on an extra sweater. The first fish we caught was only 24" and had to be released. We had a couple of knockdowns. The only keeper was a 32" rockfish I reeled in. My arms are still sore from cranking the reel and bracing the rod. Afterwards I learned how to put on the fighting belt properly to make it easier next time. It was good to get another day of training and practice without the pressure of charter customers to impress. I can't thank Captain Chris and Riverboat Bob enough for teaching me, and I'm grateful for a chance to make some cash at it.

[From left to right in the first photo below: Tim, yours truly, and Riverboat Bob]

The only fish we kept wasn't going to fillet itself, so it was time to learn. The fish was laying there in the well with the ice. I stepped down to get it but kept asking the guys if he was really dead. I assured them that if I grabbed his lip and he started flopping I would start screaming! Even though it was staring me down with its mouth wide open, it didn't wiggle a bit and I managed to hoist it for the photos and then into the dock cart to head for the cleaning station. It measured in at 32 inches. The mate, Riverboat Bob, began the process and explained what he was doing. He finished one side, flipped the fish over, and then it was my turn. I had Bob shoot the little video below. I didn't do the most elegant job, but I got it done without puking or crying, so I consider it a success. 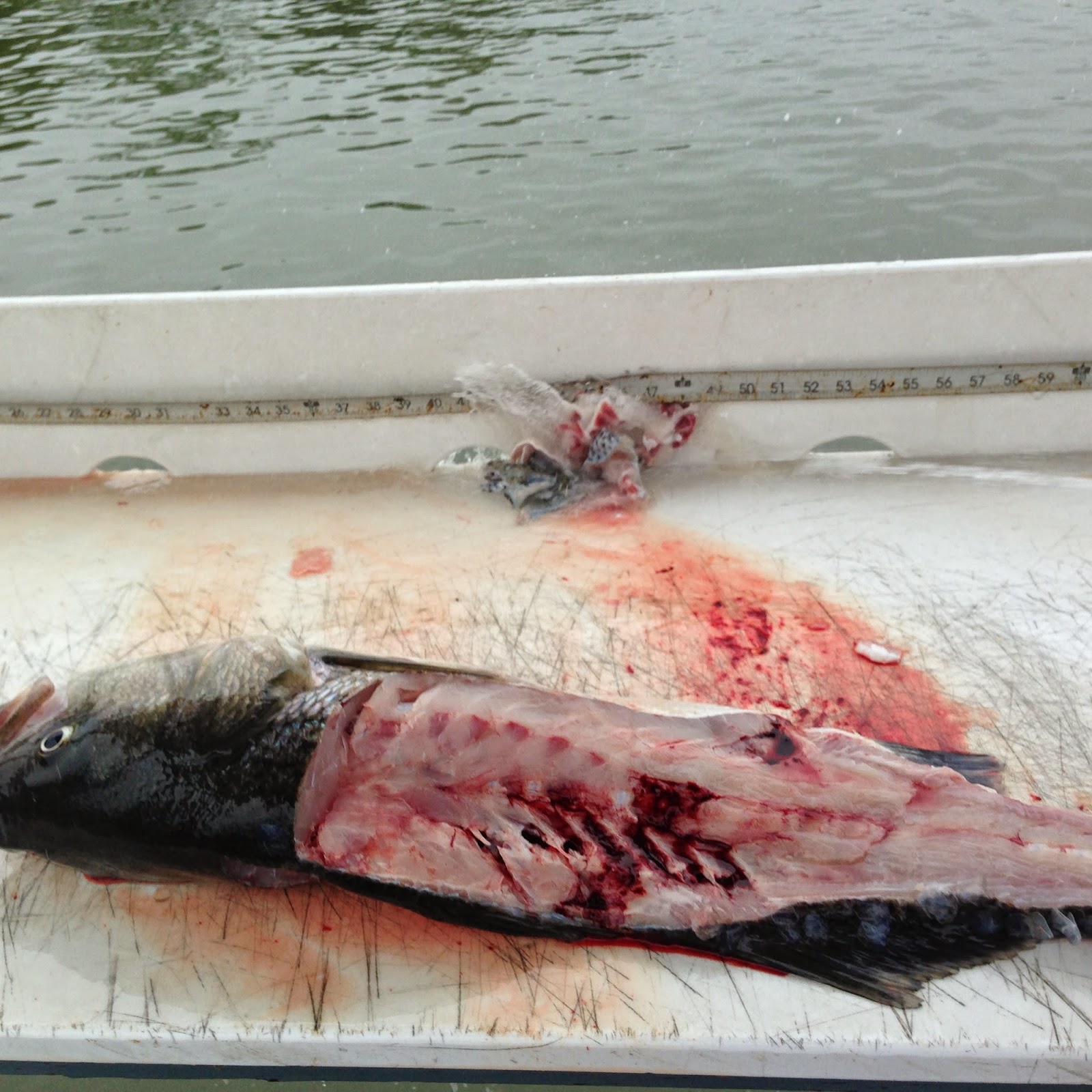 Yes, a living creature was harmed in the making of this video. I don't find it "fun" to kill nature; every little thing just wants to live. I recognize the hypocrisy that I am not a vegetarian, and stay blissfully ignorant of the lives and deaths of the beef, pork, and poultry that I eat. At least with fishing one does face the vitality and mortality of one's dinner eye to eye. I hope that when out fishing I can always be humane, respectful of wildlife, and show gratitude for the resource, and guide others to do the same.
Posted by Suzy at 8:44 PM